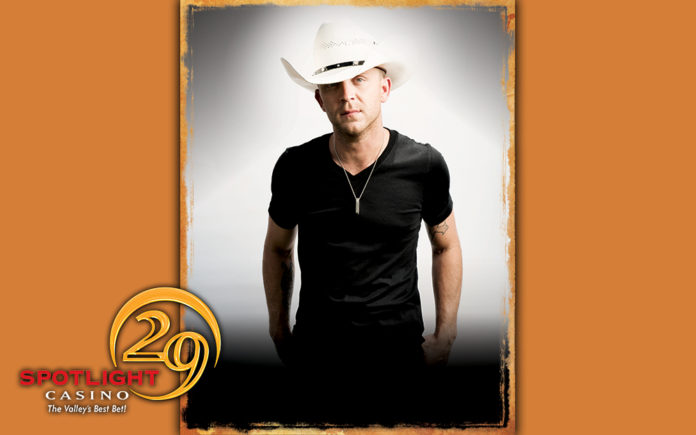 Moore burst onto the music scene in 2008 with the innuendo-laden country-rap mash-up, “Back That Thing Up,” the first single from his eponymous debut album, which peaked at No. 3 on the Country Albums chart. The follow-up single, “Small Town USA,” became Moore’s first No. 1 hit and gave name to his first major tour.

In 2011, Moore released the single “If Heaven Wasn’t So Far Away,” which became his second No. 1 hit and served as the lead single from the album Outlaws Like Me. The record, which was certified Gold, also featured the top-20 hits “Bait a Hook” and “Till My Last Day.”

Moore’s third album, Off the Beaten Path, was released in 2013 containing the hits “Point at You” and “Lettin’ the Night Roll,” the latter becoming his fourth chart topper. The following year Moore recorded a well-received cover of Motley Crue’s “Home Sweet Home” with the band’s lead singer Vince Neil.

Moore’s fourth album, Kinda Don’t Care, was released in 2016 featuring “You Look Like I Need a Drink,” which became yet another No. 1 hit.

Academy of Country Music Award winner Justin Moore performs in the Spotlight Showroom on Saturday, May 26th at 8 p.m. Tickets are on sale now at Spotlight29.com, Star Tickets (800) 585-3737, and at the Spotlight 29 Box Office and Gift Shop.