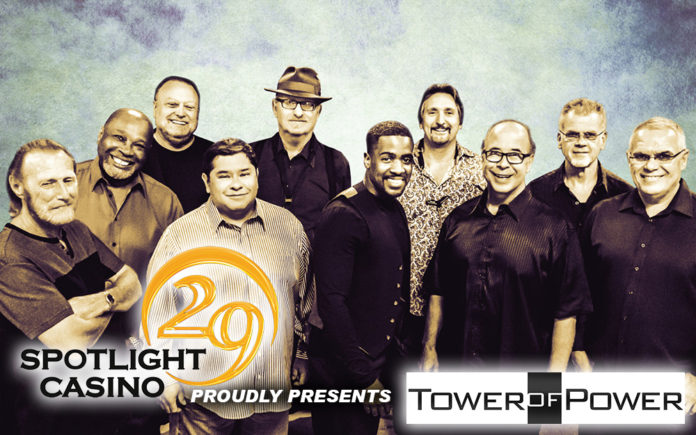 Spotlight 29 Casino is proud to present Tower of Power on Saturday, September 30 at 8 p.m. Tickets go on sale this Friday, July 28 at 10 a.m. at www.Spotlight29.com. Spotlight 29 Casino’s Spotlight Showroom offers the premier entertainment experience in the Coachella Valley.

Tower of Power has been on the music scene for 49 years. Known for their large horn section and unique blend of soul, funk, and jazz, the group has had almost 60 musicians tour or record with them. Of the 10 current members, Emilio Castillo, Rocco Prestia, Stephen Kupka and David Garibaldi are four of the band’s founding members. Over the years, the Tower of Power horns have recorded with hundreds of artists from Elton John to Aerosmith.

They have over 30 albums including seven live albums and several compilations. Tower of Power has had nine songs land on the Billboard Hot 100 with such hits as “You’re Still A Young Man,” Soul With A Capital S,” “So Very Hard To Go” and “What Is Hip?”

August 5 One Gunn, One Love, A Celebration of Bob Marley

August 12 Masters of Puppets, A Celebration of Metallica

September 23 Paul Rodriguez and The Latin Kings of Comedy