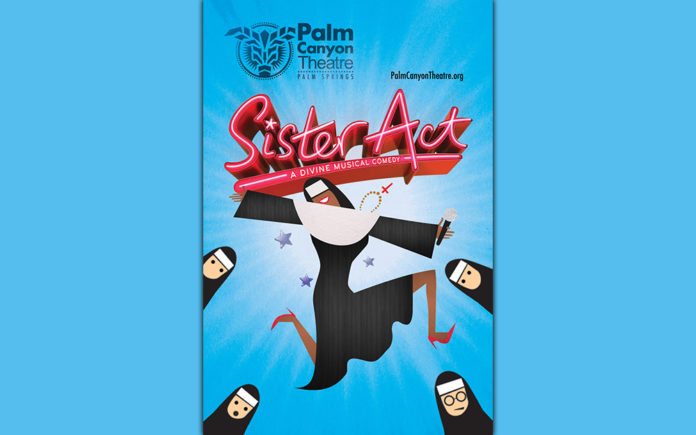 Sing praises to the Gods of comedy as Palm Canyon Theatre kicks off a sold out, standing ovation, production of ‘Sister Act,’ based on Joseph Howard’s 1992 film of the same name.  With music by Alan Menken, lyrics by Glenn Slater, book by Cheri and Bill Steinkellner and additional book material by Douglas Carter Beane.  Since its world premier at the Pasadena Playhouse in 2006, ‘Sister Act’ has drawn record number audiences and its 2011 Broadway run garnered five Tony Award nominations.  ‘Sister Act: A Devine Musical Comedy’ is without doubt the most divine entertainment you’ll find this side of heaven.

Set in the waning days of disco, Donna Summer wannabe, Deloris Van Cartier, is looking for her big break.  She inadvertently witnesses her mobster boyfriend Curtis, (portrayed by powerhouse singer, Robbie Wayne) commit a murder and suddenly finds her own life in danger.  She runs to the police where she meets up with former high school friend Eddie (Ben Reece) who is now a cop and puts Deloris under protective custody, hiding her in the one place he’s sure no one would think to look: a convent! Disguised as Sister Mary Clarence, Deloris finds herself at odds with both the rigid lifestyle and uptight Mother Superior. 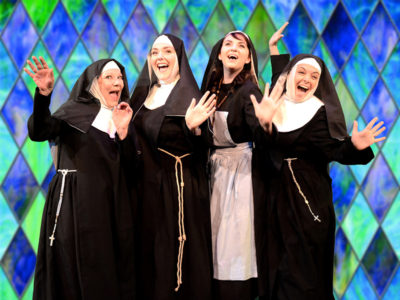 Nicole Tillman, in the lead role of Deloris Van Cartier, is a knockout!  She’s sexy, slinky, lovable and hysterical with the voice of an angel.  The disco diva turned nun delivers a dinner prayer that is a cross between communion and the National Anthem;

“Bless us, oh Lord, for these Thy gifts which we are about to receive. And yea, though I walk through the valley of the shadow of no food, I will fear no hunger. We want you to give us this day, our daily bread. And to the republic for which it stands, and by the power invested in me, I pronounce us ready to eat. Amen.”

Using her divine moves and heavenly singing talent to teach a choir of off key nuns, Deloris breathes new life into the church and community, but in doing so, blows her cover. Soon, the bad guys are giving chase, but they prove to be no match for Deloris and the power of her newly found sisterhood. 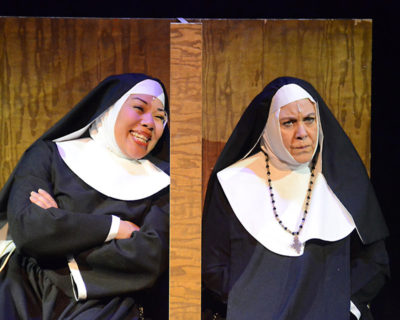 This band-of-sisters are an exceptional ensemble. Elizabeth Schmelling as Sister Mary Robert offers inspiration, as she finds her voice and transforms from a mouse to a lion.  Members of Palm Canyon Theatre’s repertory, Morgana Corelli and Cara Van Dijk provide loads of smiles and humor in their roles as singing nuns. Mother Superior, (Amanda Burr) has a mesmerizing voice and tugs at the heartstrings as a woman who is reluctantly forced to adapt to a changing world.

This show will have you laughing, singing and fighting the urge to bring disco back.  Creatively directed and choreographed by Robbie Wayne, ‘Sister Act’ is filled with inspiration, fun and a reminder of what good theatre is all about.  Jaci Davis’ musical direction was beautifully executed and worked in perfect harmony with Jack Ramoran’s sound design. 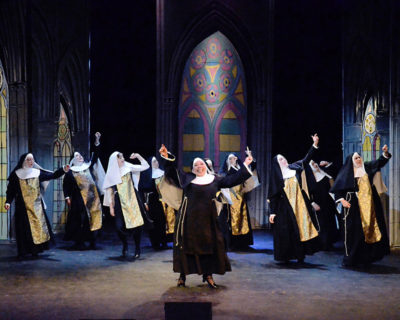 Take your friends, take your family and go see Sister Act.  I wouldn’t wait too long to get your tickets, they are selling fast on this one.  Running March 9 – 25, 2018.