“How well I remember the stadiums we played, and the lights sweeping across a sea of 50,000 souls we’d face/A serious drug you can never kick, or one you couldn’t imagine you’d ever replace… Rock stars don’t ever die, they only fade away.”

That’s Sting on the song “50,000” off 57th & 9th, his first album of new material in nearly 10 years.  Opinions have always been sharply divided over Sting.  Some music lovers deeply appreciate his cross-cultural melodicism and political activism and consider him as an erudite Rocker. Others view him as a pedantic, tantric-sex aficionado and musical dilettante, who consistently pillages a variety of World Music genres to his own camouflage his lack of originality.

Gordon Sumner was born in October, 1951 in Wallsend, Northumberland England. The eldest of four, his father was a milkman and his mother a hairdresser. He grew up in the shipping town of Newcastle. Helping his dad deliver milk in the pre-dawn hours gave him plenty of time to daydream about a more glamourous life.  When a friend of his father’s left behind an old Spanish guitar, he taught himself to play, and began envisioning a career in music.

He worked his way through school as a bus conductor, building laborer and tax officer and by 1974 he received his teaching credentials and taught at St. Paul’s School. On weekends he played bass in various Jazz combos, most prominently, Last Exit. When he wore a yellow and black striped sweater to a gig, a band-mate quipped he resembled a bee. From that day on, he was known as Sting.

Moving to London in 1976, Sting connected with ex-Curved Air drummer Stewart Copeland and guitarist Henry Padovani.  Punk (and subsequently, NewWave), had just begun to make waves when the trio formed as the Police. They recorded their first single, “Fall Out” in 1977, but Sting quickly tired of Padovani’s limitations and soon recruited veteran guitarist Andy Summers.  Nearly 10 years older than Sting and Stewart, Andy began playing in the ‘60s with venerable outfits like Kevin Ayers, Zoot Money and a late edition of Eric Burdon And The Animals.

The Police was one of the first New Wave bands to achieve massive success. Their sound was a canny blend of Punk, Jazz and Reggae. By late 1978, they signed with A&M Records and released their debut, Outlandos d’Amour. Their first single, “Roxanne,” (an ode to a prostitute), managed to be a Top 40 hit on both sides of the pond. The trio paid their dues, touring the U.S. in a junky Econoline van.

In the five years that followed, the Police achieved world domination. They released a string of albums in rapid succession; Regatta de Blanc in 1979, Zenyatta Mondatta in 1980, Ghost In The Machine in 1981 and Synchronicity in 1983. Songs like “Message In A Bottle,” “Don’t Stand So Close To Me,” “Every Little Thing She Does Is Magic” and “Every Breath You Take” shot to the top of the charts.

After a lengthy world tour that included headlining the US Festival, the three-piece took a much needed break. Sting had already began to make an name for himself as an actor, working in good films like “Quadrophenia” and “Brimstone & Treacle,” as well as resounding flops like “Dune,” (anyone remember him as the golden diapered villain Feyd-Rautha Harkonnen?) and “The Bride.” Now he felt ready to record his first solo album.

Enlisting up-and-coming players like saxophonist Branford Marsalis, drummer Omar Hakim, bassist Daryl Jones and pianist Kenny Kirkland, he recorded his 1985 debut, The Dream Of The Blue Turtles. Hewing more closely to the Jazz paradigm he had honed pre-Police, the album was a massive success.  The Police officially broke up in 1986.

One year later he doubled down with …Nothing Like The Sun. The lengthy album tackled weighty topics like the recent death of his mother, as well as the brutal dictatorships in South America and even the American assimilation of British bon vivant Quentin Crisp, (author of “The Naked Civil Servant”).  The Soul Cages album arrived in 1991, a reaction to the death of his father and a reflection of his Newcastle childhood.

After the contemplative mood of Soul Cages, Sting came roaring back in 1993 with Ten Summoner’s  Tales. It included his most infectious songs like “Fields Of Gold,” “Shape Of My Heart” and “If Ever I Lose My Faith In You.” It spent a considerable amount of time at #2 on the Billboard charts and was certified Platinum three times over.

Creatively, Sting hit a wall with his next album. Mercury Falling was released in 1996, and with the exception of  “I’m So Happy I Can’t  Stop Crying,” (which became a  crossover hit when  Country singer Toby Keith covered it), the rest of the songs felt like aural wallpaper. By the end of the millennium, Sting had regrouped and recorded Brand New Day. That song collection relied heavily on Middle Eastern influences and incorporated Algerian Rai singer Cheb Mami on several tracks.

Three years into the 21st century Sting returned with his most half-assed record to date, Sacred Love. Recasting himself as some sort of smooth, Quiet Storm R&B singer, he enlisted Mary J. Blige for a tepid duet. The album sold well, but it felt dull and uninspired.

One would think for Sting’s next effort he might go back to the drawing board, perhaps revisiting his Punk Rock beginnings. Instead, he made a hard left turn and released Songs From The Labyrinth in 2006. A collaboration with Bosnian lutenist Edin Karamazov, the duo reinterpreted songs from 16th century composer, John Dowland.  (Because what could be less pretentious?).

For the last 10 years, aside from a very satisfying Police reunion tour (sans a new studio album), it felt like Sting completely abandoned Rock N Roll. He recorded the obligatory Christmas album, If On A Winter’s Night, followed by Symphonicities in 2010. Enlisting the Royal Philharmonic Concert Orchestra he recorded a selection of Police and solo songs giving them a Classical flavor. (Um, yuck).

In 2011, he turned his attention to Broadway, composing The Last Ship, a musical inspired by his childhood and the demise of the British shipping industry.  It opened in Chicago in 2014 before moving to Broadway a few months later. A resounding flop, it struggled to find an audience even after Sting rather famously joined the cast. A companion solo album, released ahead of the stage debut in 2013 fared slightly better. But all the signs pointed to Sting returning to his Rocker roots. The result is his new album, 57th & 9th. 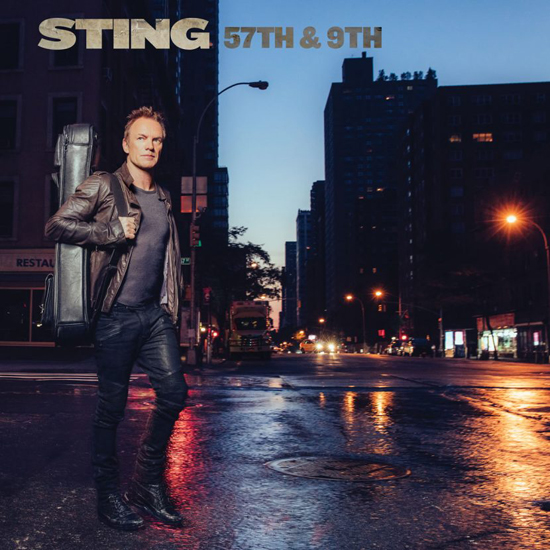 The album opens with the rollicking first single, “I Can’t Stop Thinking About You.” A bludgeoning beat and wind-milling power chords anchor this tale of obsessive love. The lyrics are weirdly cryptic, and the melody echoes older Police tracks like “Synchronicity II” and “Truth Hits Everybody.” Thankfully, this urgent rocker is devoid of any Lute solos.

When Sting is on his game, he still seems as potent and profound as he did in the late ‘80s and early ‘90s.  The buoyant melody of “One Fine Day,’ belies this dire message to climate deniers; “Today the North west passage just got found, three penguins and a  bear got drowned/The ice they lived on disappeared, seems things are worse than some had feared.”

For “Inshallah,” he effortlessly slips into the skin of a scared and tired (Syrian?) refugee shepherding his young family from country to country, hoping for a respite from war and bloodshed. The hypnotic tune is propelled by a percolating tabla rhythm and keening guitar. Sting intones the title (Arabic for “God Willing”), like a mantra, trusting his fate to a higher power.

On the aforementioned “50,000,” Sting offers a wry meditation on Rock stardom, his halcyon Police days and the  unexpected deaths of  contemporaries  like  David Bowie and Prince.  Over a kick-drum beat and tensile guitar riffs he comments on the 21st century mourning process; “We tweet our anecdotes, our commentary, or we sing our songs in a sad tribute/While the tabloids are holding a story of kiss & tell, that he’s no longer able to deny or refute.”

As good as those songs are, they are offset by a few glaring mis-steps.  Spiraling guitar figures spin clockwise and counter-clockwise on the winning melody of “Pretty Young Soldier,” but the lyrics feel half-baked.  Sting sketches out a “Yentl-esque” scenario of a young bride masquerading as a soldier in order to find her groom at the frontlines of a war. But the story abruptly ends as a commanding officer discovers her ruse. His yarn seems better suited as part of a breathless Harlequin Romance.

While “Petrol Head” offers the Punkiest melody Sting’s attempted in years, the stinging guitar, fractious arrangement and blustery vocals can’t compensate for a tedious “driving as sex” metaphor. Yes, the stick-shift as phallus imagery is employed, along with incongruous Bible references; “I’ll take you someplace you’ve never been before, a place you’ve only dreamt about once more/Like Moses driving to his promised land, left turn at the burning bush, a stick-shift, two stone tablets, God’s commandments in my hand.” (Huh?)

Finally, “Heading South On A Great North Road” feels like a leftover Lute-y song from 10 years ago.  Apparently people and dogs are travelling, maybe by wagon on a road. The verbosity of the lyrics can’t disguise the fact the story is stretched pretty thin.

Sting does better sticking to affairs of the heart.  “Down, Down, Down,” is accented by lithe and supple guitar licks, wiry bass lines and a see-saw rhythm.  The lyrics offer a bleak marital mea culpa. The best track here is the raw and intimate “If You Can’t Love Me.” A minor-key masterpiece, it presents a stark soliloquy of a marriage in shambles.

The piano-driven melody is spare, conversely, the language is dense, intricate and confrontational; “You can’t be here and someplace else if your mind is in that other place/You’re trying to convince yourself but you’re lying in my face/I’ve listened ‘til my head will spin, I don’t want half of anything.” That last line he spits out equal parts brutality and anguish.

57th & 9th closes properly with the tender benediction of “The Empty Chair.”  It’s one of those melancholy “Danny Boy”/”Green Green Grass Of Home” songs where it isn’t quite clear if the narrator is alive or dead.

The album ends there unless you pony up the extra dough for three additional tracks. A more Countrified take on “I Can’t Stop Thinking About You,” and a live version of the old Police chestnut, “Next To You.”  Here Sting is backed by the Last Bandoleros, an up-and-coming Tex-Mex four-piece. Those songs are interesting, but not essential. However a version of “Inshallah” that features the Qanun (a Turkish zither) adds a layer of ethnic verisimilitude that renders the bonus track vital.

No one expects a man of 65, an actual Kennedy Center honoree and CBE (Commander Of The Most Excellent Order Of The British Empire), to ditch his stretchy yoga togs and return to his old Punk Rock Bondage pants. That would seem desperate and kind of depressing. Like a bald man trying to recapture his youth by strapping on a toupee. 57th & 9th isn’t perfect, Sting still needs to resist  the urge to be didactic,  but it’s a step in the right direction.  One final word of advice: step away from the Lute.