There’s some interesting beer news happening around the world. Across the pond over in England, Kellogg’s cereal is turning ugly ducklings into beautiful swans by taking rejected corn flakes and turning them into tasty IPA’s.

The American company with products manufactured in 18 countries has begun a marketing campaign to show that they’re fighting food waste by turning rejected corn flakes into beer.

Kellogg’s manager, Kate Prince, states, “It is great to be involved in such a fun initiative; (we are) working hard it to eliminate food waste in our manufacturing processes and give our consumers the wholesome products they love with minimum impact on the planet.” Kate states that Kellogg’s approach to beer making has delivered a 12.5% reduction on food waste in their sites. 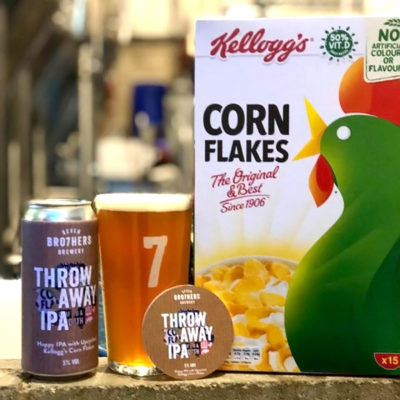 Manchester based Seven Bro7hers Brewing is collaborating with the cereal company to produce the first in a line of three planned beers using corn flakes; the first beer is a 5% ABV called “Throw Away IPA”. It’s grain bill is 30% corn flakes that didn’t pass the quality control process, either for not being the desired size or not being cooked properly, while wheat makes up the remaining 70% of the brew. The beer is said to have a rich, “corn flake golden” color and a taste that’s sweeter than a typical IPA. The use of all those flakes keeps them from ending up in a landfill, and a portion of each sale goes to UK food distribution charity, FareShare.

Throw Away IPA will be sold in bottles and cans, with roughly 13 cents from each sale going to FareShare. No news at this time if the breakfast cereal-based IPA will be shipped to the US for sale to American craft beer drinkers.

Apparently, Australia heard about the English brewing with upcycled corn and said, “hold my beer,” because over in Tasmania, beer has been successfully brewed using yeast from 220-year old bottles of ale discovered at the bottom of the ocean. Now, that is some serious upcycling. 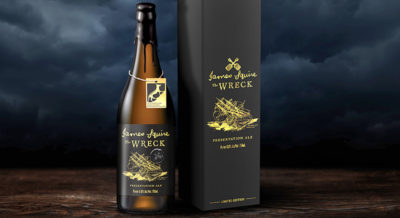 The Sydney Cove set sail from Calcutta, India, in 1796, to Port Jackson in Australia, carrying essential supplies like grain, rice, tobacco, and alcohol. The port never saw the ship, as it wrecked off the treacherous north coast of Tasmania, leaving behind most of its precious cargo. Discovered by divers in the 1970’s and salvaged by the government in the 1990’s, some of the more durable supplies were brought up from the depths, including 37 glass bottles containing wines and ales, 22 of which remained hermetically sealed. Kept at the Queen Victoria Museum & Art Gallery, the ales would sit undisturbed for almost two more decades until researchers came up with a headline-grabbing way to bring publicity to their museum.

Conservator David Thurrowgood is the man who proposed the idea of opening a bottle of the 220-year old ale and seeing if it could be reproduced. The cold depths of the oceans floor successfully kept the yeast in every bottle alive, dormant in a centuries-long  hibernation. The news spread fast, and James Squire’s Malt Shovel Brewery was given the honor of recreating the historic brew. After many test batches, a limited-edition beer, christened “The Wreck Preservation Ale,” has finally been unveiled in the winter of 2018, giving lucky fans a chance to taste a one in a lifetime beer.

According to head brewer Haydon Morgan, the yeast was temperamental to work with, throwing off spicy-phenols and clove aromas. A recipe was formulated to create a historic-style porter, a popular style of beer in the 1700’s. Said to have a rich smooth taste, with hints of blackcurrant and chocolate, the beer is a true collaboration between the Queen Victoria Museum and James Squire Brewing.

Much like Kellogg’s and Seven Bro7hers collaboration, “The Wreck Preservation Ale” shows the creativity still being brought into craft brewing, and the ideas that can come from it.