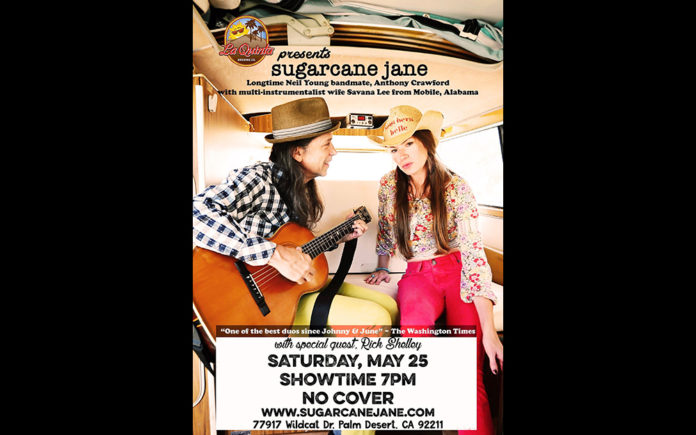 Alabama’s Americana sweethearts Sugarcane Jane released their seventh studio album, Southern State of Mind, in late 2018 on Nashville’s ArenA Recordings and remained #1 on the Alabama Top Album Chart (Roots Music Reports-2018) for weeks. The album romanticizes the beauty of living in the South while maintaining a positivity that is electrifying, stimulating, and downright infectious. It’s modern Americana.

Sugarcane Jane will be performing at La Quinta Brewing Co. at 77917 Wildcat Drive Palm, Desert, CA on Saturday, May 25th at 7 p.m. This show has NO COVER! Special guest for this show will be the CV’s own Desert Americana ambassador Rick Shelley.

The band is made up of multi-instrumentalist, songwriter, and producer Crawford, who has spent decades touring alongside Neil Young, Steve Winwood, Dwight Yoakam and his multi-instrumentalist wife Lee, who cut her teeth in Nashville co-owning and managing the vintage analog recording studio, Deepfield Studio. Both of whom are members of Americana super group, Willie Sugarcapps with Will Kimbrough, Grayson Capps, and Corky Hughes. Anthony’s songwriting credits include Steve Winwood, Dwight Yoakam, Kenny Rogers, The Nitty Gritty Dirt Band, The Oak Ridge Boys, and others.

Coachella Valley music fans who attend can expect mostly acoustic sounds, and some of the freshest-sounding vocal harmonies they will ever hear.

Coachella Valley Weekly interviewed Lee while they are in the midst of their spring tour.

Lee: “It’s very personal. We are very connected to each other which allows us to turn on a dime, change tempos, and be dynamic.”

CVW: Furthermore, as husband and wife?

Lee: “It doesn’t get much better, doing what you love most with the person you love most. Our love for each other radiates through the music. It is a total blessing.”

CVW: You both use multi-instrumentation in your music. Anthony plays acoustic guitar, mandolin, and a bass drum or stomp box and Savana Lee plays rhythm guitar, tambourine, and snare drum. What has been the biggest challenge to facilitate your live shows?

Lee: “The biggest challenge is to keep evolving. I think when you never change what you’re doing, you stop growing as an artist. I’m playing a little uke bass now and loving the bottom end it’s adding to the music. We can literally bring one guitar and my uke bass, focus on our vocals, and still put out some serious sound. That’s actually exactly what we’re doing on this tour.”

CVW: How much does living on the Alabama Gulf Coast influence your sound?

Lee: “A lot. I mean everything you’re around or listen to influences you; the slower pace, the majestic oaks, the people and their ideologies, it’s a very colorful place to live. Alabama in general has always been a hot spot for music and it’s exciting to see so many Alabama artists getting attention these days. There is tremendous talent in the gulf coast region and it’s only a matter of time before it explodes onto the scene in a much bigger way.”

CVW: Do you agree that what’s lacking in today’s music is the nostalgia and sentimentality of American Roots songs that make up Americana music?

Lee: “I think American Roots songs are alive and well, it’s getting those artists to mainstream radio and to the general public that’s always the challenge. Especially in this day and age, formats are changing and it’s a wide-open highway. We are all just trying to figure out how to get to the people. Will Kimbrough has a great new album, I Like It Down Here, that Anthony and I are on, Anthony just produced a debut album for Honeyboy and Boots, an Americana duo from Mississippi that’s great. He is also working with Arkansas-based duo Ten Penny Gypsy who is nominated for Artist of the Year by the ACMA’s. The music is out there, you just have to find it. People like Buddy Miller and Jim Lauderdale are working diligently to get artists like us heard. We had a great interview with them last year that aired on their Buddy & Jim Show on Sirius XM Outlaw Country.”

CVW: Americana continues to grow is a continued holy place for musical inspiration. How can we keep Americana’s integrity intact?

Lee: “Americana, or Folk Music, has been around forever. I don’t see it going anywhere. Now, more than ever, we are making strides to put a spotlight on it. There is now an Americana Billboard Chart; that’s huge. Jed Hilley continues to spotlight artists every year at Americana Fest in Nashville and you’ve got Russell Carter, creator of the 30A Songwriter Festival in Santa Rosa Beach, Florida continuing to bring the Americana acts to the forefront. Our own label, ArenA Recordings, and Buzz Cason has been a champion for Americana. Acts like Jason Isbell and Sturgill Simpson has proven that people like this kind of music so I think the big dogs are taking notice. There is a demand out there for something real. People are tired of the overproduced, heartless tunes that are being fed to mainstream. As Bob Dylan would say, “The times, they are a changing.’” The main thing is that people are wanting something real. And for me personally, I love to hear an artist live that actually sounds like their records; that’s honesty. That’s just being who you are. It’s simple but good. I’m in love with that sound and I think so are a lot of other people.”

CVW: What has been the response to your 2018 release, Southern State Of Mind?

Lee: “The response has been overwhelmingly positive. We have been pretty shocked that it is has been #1 or #2 on Roots Music Report for 22 weeks as the top Alabama album across all genres, especially considering the artists in our state like Jason Isbell, Chris Stapleton, Alabama Shakes, Anderson East and St Paul and the Broken Bones. That is a staggering accomplishment for us. We still have three songs in the top ten which is pretty incredible being we released this album last October. We are just really thankful for all the support and love that’s been thrown our way.”

CVW: How has your sound matured from your first release through Dirt Road’s End and most recently Southern State of Mind?

Lee: “Well, Southern State Of Mind really captures that whole Gulf Coast vibe and is a bit more personal than the previous Dirt Road’s End. Dirt Road’s End was recorded at Creative Workshop in Nashville whereas the current one was recorded at our home studio, Admiral Bean, in Loxley, Alabama. They are both products of the songwriting genius of Anthony and Buzz Cason. They had just written the songs on Southern State of Mind and we had not been performing them for years like we had the ones from Dirt Road’s End. It gave it a very fresh and pure sound.”

CVW: You’ve described your art as “Organic Music at its Finest.” Can you elaborate further?

Lee: “No GMO’s, no fillers, made with love. Our music is honest and real. We aren’t trying to do anything other than what it is we do naturally. I call that as organic as you can get.”

CVW: What’s next for Sugarcane Jane and where do you go from here?

Lee: “Who knows; more touring, more festivals. We would love to cross the pond to Europe at some point. Anthony has written over 400 songs that are so good. I just want to try to get them out to people. They should be heard. We have our work cut out for us trying to do that while raising an 8, 6, and 3 year-old is pretty challenging. We’ll see what happens. You can be sure we will be playing music somewhere, it’s just what we do.”

CVW: Is there anything else you’d like to add?

Lee: “I would love to see some people come out for our shows on this tour. We are driving across the country from Alabama to perform at The Strawberry Music Festival on May 23-24 in Grass Valley, California. We have lots of stops along the way. We’ll also be in Colorado in July with our other band, Willie Sugarcapps, with Will Kimbrough, Grayson Capps, and Corky Hughes. And then in August we are opening some shows for Dwight Yoakam in the Northeast with our full band. It’s gonna be a lot of fun.”

“Musically, I’m trying to find the footing for a new record. The mix of a band, playing a lot solo has jumbled in my ear some. So I’ve been getting in the studio whenever possible and recording just to see how things sound. I will be going back to Hi-Lonesome Recording Studio soon to continue work with The Desert Dogs. They’re the band that I’m blessed to record with and that back me up on the full band gigs. As far as my vision in bringing world-class Country and Americana music artists to the Coachella Valley, maybe it could be described as a bit of a co-op. Most artists will not make it to big tours, arenas or festivals like Stagecoach. There are tons of great bands in the region that are going it alone. I want to create a route though the area for tours to book into. I want to help others and I’ll need help from others to do it.”