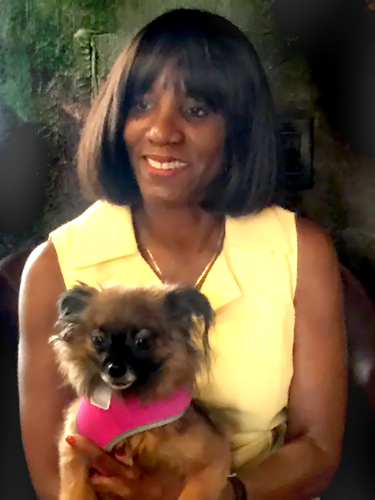 The small Pomeranian mix dog was out of time at the San Bernardino County shelter at Devore.  One of the most adorable dogs I’ve ever seen, she was on the 4th day of availability with no adopter or rescue. I wondered why she was not adopted until I noticed her head slightly shaking.  Loving All Animals, my rescue group, recently saved another dog that had a foxtail imbedded inside her ear, and I suspected this dog had the same condition.  If so, a simple surgical procedure could correct it.  I named the five pound spunky pup Delila, and we made the joyful freedom ride back to the Coachella Valley.

The vet removed a total of five foxtails from Delila’s ears.  This evidence suggests the stray dog was out in the desolate fields and tough streets of San Bernardino for quite some time.  It soon became apparent Delila was an amazing little dog, with a giant Alpha attitude that rivaled none.  She quickly established her placement as “leader of the pack” taking charge of other canines she encountered.  I believe her Alpha attitude and “tough girl” body language kept Delila alive in a community where large stray dogs and predators abound.

Delila bullied my mother’s 40 pound Cattle dog, such that Jessie cowered under the bed during our visits.  At adoption events, she took a defiant stance with the dogs of prospective adopters.  Preferring the company of humans, Delila was a precious gem who would melt lovingly into your arms.

We concluded Delila would do best in a “only dog” household. One prospective adopter was sure Delila could successfully join her home with 2 other rescue pups, only to call two days later with a desperate plea the dogs were not getting along.  Delila came back.

Milissa Meyer was grieving the loss of her precious dog Amy.  She was decidedly not in the market to adopt another one.  Ignoring her comments, I handed her Delila at the Draft Horse Ranch Yappy Hour.  Milissa recalls, “When I met Delila she looked at me as if to say ‘please take me home’ and wrapped her paws around my neck.  We are the perfect match.  When I wake up in the morning and look into her eyes, all my disappointments go away and I’m filled with joy.  I love this dog so much, and she always has her eye on me.  When I look at Delila, I feel a flutter in my heart.  It’s as if we were meant to be together.”

Milissa went on a casting call for Altura Credit Union, and named Loving All Animals as her favorite charity when she was chosen.  This gorgeous duo were featured in Altura’s televised commercials across the country promoting both Altura’s services and Loving All Animals’ rescue of homeless pets.  Delila and Milissa beam down from billboards throughout Riverside County.  Altura Credit Union presented Loving All Animals a check for $5,000 to help us save more animals like Delila.  Delila’s stardom is all the more amazing considering her survival on the streets and narrow rescue from the shelter with only minutes to go.

For more information about rescue dogs and cats contact Loving All Animals at www.lovingallanimals.org or (760) 834-7000.