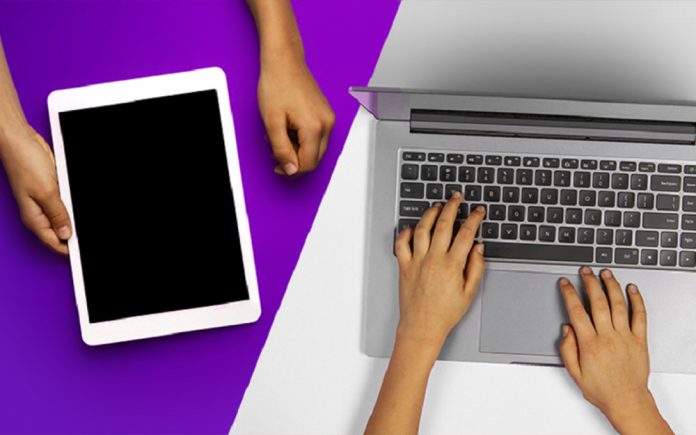 Differences and making the best choice for your needs

Tablet technology has advanced in recent years to the point that some devices can compete with laptops. In addition to a CPU, both have memory, a battery, and most of the other components that comprise a computer. However, there are distinct qualities that distinguish a tablet from a laptop. In terms of definition, a tablet is a portable computer with a touchscreen display and a mobile operating system that lacks the typical In/Out ports present in a computer. A laptop, on the other hand, is a portable computer that has a full operating system, a non-touchscreen display (in most cases), a mouse, and a keyboard. A laptop also has the standard In/Out ports seen on most desktop computers. A tablet lacks most of the I/O ports found in a laptop. Finally, tablet computers are often significantly smaller in size than laptop computers.

Trying to decide between a tablet and a laptop might be difficult, as they are generally both computers with processors. If you’re undecided about whether to buy a laptop or a tablet, consider the advantages and disadvantages of each.

The performance of a device is primarily determined by its purpose and price. In terms of performance, at lower prices, tablets are often equivalent to similarly priced laptops. However, when laptop costs rise, their performance grows accordingly. If we’re talking about a device that’s mostly used for online browsing, multimedia, and basic gaming, a tablet will almost certainly surpass a low-end laptop. Laptops can outperform tablets in the mid-to-high-end price range, enabling them to dominate in this category.

One of the most important factors to consider is the device’s portability. Tablets win most of the cases as they are smaller in size and weigh less. Tablets with 8-inch or 10-inch screens are the most popular because they strike the ideal balance of ergonomics and screen size. Laptops, on the other hand, may span a wider range. They come in a variety of sizes, from 12 inches to 21 inches.

The typical 15-inch laptop weighs about 2 kg. Although this laptop is heavier than a tablet, there is a large variety of laptop weights, just as there is a vast range of screen sizes. Notebooks generally weigh less than a kg. Gaming laptops, on the other hand, may weigh up to 8 kg. However, tablets are more portable than even the smallest laptops since they are lighter and smaller.

Resolution and display size are also the two important factors to consider. Due to their bigger frames, laptops are more likely to be able to display larger screens. However, when pixel density is considered, the smaller tablet display has a greater pixel density. As a result, the image will be crisper, and individual pixels will be less noticeable. Thus, tablets typically have superior graphics at cheaper rates than similar-priced laptops. This is because the pixel density is greater.

Storage capacity is another critical factor to consider, and laptops are usually the market leaders in this category. The most affordable laptops include either a 500GB or 2TB HDD or an SSD. These outperform most tablets. Tablets feature internal storage capacity ranging from 8 GB to 512GB. However, some higher-end tablets have storage capacities of up to 1TB. Overall, laptops have a much larger storage capacity. Most laptops’ internal storage drives may also be upgraded but tablets do not allow this.

Overall, we would give upper hand to laptops in terms of the storage capacity because SSDs can easily equal the speed and capacity of tablets. There are also low-cost alternatives for external storage, as well as the ability to update the laptop’s internal storage at any time.

Cameras are built into both laptops and tablets; however, tablets are more sophisticated in this regard. The reason for this is that tablets have both rear and front cameras. Furthermore, the cameras are of higher quality than those available in equivalent laptops. It makes sense because tablets are more portable than computers and can have many smartphone functions. Laptop cameras are not of great quality, especially for low-cost laptops. Tablets are more adaptable and feature higher-quality cameras at a lesser cost.

With or without a keyboard

Tablets have a touch screen and operate like smartphones. The touchscreen keyboard is used for typing. If you find it difficult to type on the on-screen keyboard, you may buy a wireless keyboard and a protective case with a built-in keyboard separately. A laptop’s physical keyboard enables faster typing and greater comfort. It’s probably the finest choice if you’re going to create spreadsheets or documents.

Tablets are powered by low-power components that conserve energy. In most tablets, the battery takes up most of the internal space. Many tablets can operate for up to 10 hours on a single charge due to huge batteries and power-efficient components. Laptops, on the other hand, are more powerful and need more demanding processing, storage, and functionality. Laptops are more complicated, which means there is less space for the battery. Laptop components are also more powerful and use more power than tablet components. Even with comparable-sized batteries, the typical laptop battery life is four to eight hours.

Whatever your needs are, the most important factor in deciding between a laptop and a tablet should be easy to use, and looks and feels good to you. Choose the device that is most convenient for you and will make your life and computing more convenient, and is something you’ll actually use. A laptop is your best choice if you need to do a lot of typing or operate with many software applications at the same time. If you only need a gadget for browsing the internet, keeping up with the news, or relaxing with your favorite movie, a tablet will suffice. There is no right or wrong answer here; choose the device that best suits your needs.

Have a suggestion for our next article or questions about choosing your next device or need some assistance setting it up? Please contact us by calling (760) 205-0105 or emailing at tech@eggheadit.com and our Eggsperts are happy to help you with your questions or suggestions.