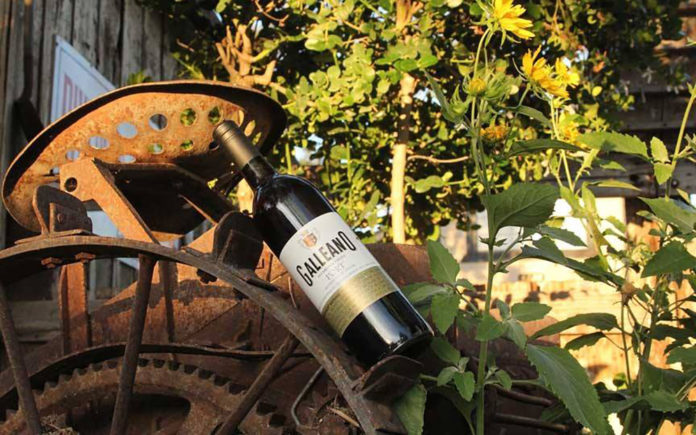 Just the other day, I heard the expression, “you can never go home.”  The context of the comment was that it’s just not the same experience going back to some old memorable surroundings.

I guess that’s sort of true; but there are some interesting dynamics played out in the game of wine where the combination of human senses—sight, smell, taste, feel, and even hearing lock some particular memories as though they just occurred recently or at least still fresh in one’s mind . For instance, when I see a picture of an old wine label, such as a Louis Martini North Coast Cabernet Sauvignon, immediately I remember enjoying that wine with spaghetti one night with my young wife over forty years ago!

Back in the late 70s and early 80s, California wine was on everyone’s lips, literally as well as figuratively. At that time, California was fast making news by winning top honors in competitions with their fine European counterparts.  But really, California vino has been in the wine history books for a long time. Indeed, California has gone through three “golden ages of wines”.

Long before the Pilgrims landed, three small ships sailed into the harbor near what would later be the town of San Diego.  In 1542, Cabrillo landed and a few months later ventured into Ventura County’s Mugu Lagoon, “a cactus-studded, rocky, sun-drenched peninsula—hot as a furnace”, as reported by the explorers.  It was Spain’s policy that their colonists in the new world, plant every year for five years, one thousand vines for every Native American living on the land. So there we go!

Interestingly, after Sir Francis Drake’s pirating antics on the coastal Spanish ships and his landing by the San Francisco harbor, the Spanish court set in motion the expedition of De Portola and Padre Junipero Serra to simultaneously plant the Cross, the sword, and the vine in San Diego. In 1769, thus began the romantic wine history of California, with the ultimate establishment of the chain of 21 missions, the presidios, and the pueblos that have become today’s cities, ranches, and farming communities.

Planting the “Mission” grapes” (UC Davis contends the grape to be a variant of the Spanish Monica) from San Diego to Sonoma certainly provided communion wine produced at the missions.  This prompted California to be a vineyard destination in the 19th and 20th centuries that would forever bring Europeans from almost every wine-producing country, over here, along with their varietals

The blue-black Mission grape, “round as a musket ball”, from abundant yielding vines “taller than a man”, kept the Spanish wine enthusiasts happy as it produced wine reminiscent of Málaga.  And the grapevine continued to be the only species in California until the 1830s when Jean Louis Vignes arrived in Los Angeles from Bordeaux bringing French vine cuttings and traditions that would improve the product of the padres.

The Mission grape is still used in wineries for both port and sherry style wines, but perhaps its finest role is in the production of a rich, sweet, golden dessert wine called Angelica, named after the city of Los Angeles.  And actually, there are just a handful of wineries still producing traditional Angelica as it was made in Vignes’ time. 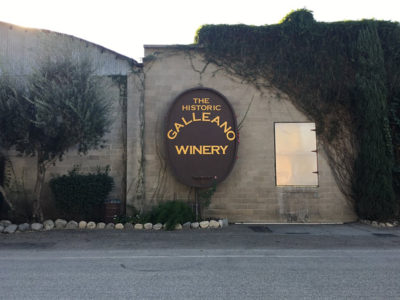 The Historical Galleano Winery in Mira Loma Ca., which is a little over an hour’s drive west of Palm Springs, is one of the last wineries making this four-star award winning dessert wine. And the reason it continues to overwhelm the wine judges is its ethereal flavor profile of dates, figs, apricots, shortbread, browned apples, spicy molasses, butterscotch, and honeysuckle along with citrus acidity to keep thing fresh and lively.

This winery has been around since the 1920s. We’ve written on this winery previously and it’s always interesting to note that just before the Prohibition era (1920-33) the Cucamonga Valley had more vineyard acreage than the combined Sonoma/Napa Valley has currently. Sadly, less than 700 acres survive.  Other wines produced at the Galleano winery include their multi-awarded port and sherry-style wines along with its famed Zinfandel from the age-old Rancho Cucamonga vines.

Galleano Zinfandel is a medium-bodied wine (not the heavy stuff that many believe all red Zin to be). It can handle a good chilling for lunch and is a great match for summer dinner fare that will keep things lively and won’t put the party to sleep.

Don Galleano is the third generation owner and winemaker whom I’ve known for close to 30 years. My family and I have represented the winery at various tastings and wine events. And if you think we are a bit biased in touting his Zin, well just check out Inland Empire Magazine, where this Zinfandel continues to be declared one of the best in the red wine category that’s produced in Southern California.

When we pour at tastings, I let those who are used to fruit-bombs and full-bodied sweet-like Zins know that “this IS your grandfather’s Zinfandel: old style with a classic aged fruit & pepper backdrop”. This wine is aged and softened in very large old redwood vats, and that’s why it scores in competitions: there’s great wood backbone here as with the higher priced Zins.

Talking about going back home, every time one enters the serene and bucolic setting of the Galleano Winery, you are taken back to a memorable time in the past.  Believe me—take a visit.  It’s a perfect week-end destination when you’re out for a drive, or wish to picnic at a winery; and, to behold a real part of California wine history.  Cheers!