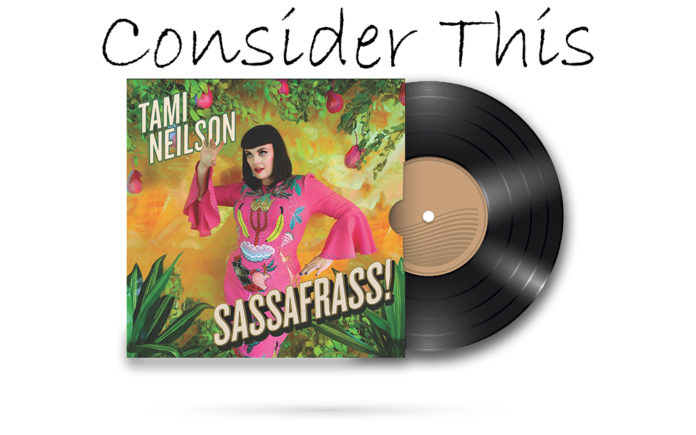 If it were possible for Shirley Bassey, Carmen Miranda and Wanda Jackson to have a musical love child, her name would be Tami Neilson.

Tami was raised in Canada and grew up in a musical clan. The Neilson Family, parents Ron and Betty, plus younger brothers Joshua (“Jay”) and Todd toured Canada and the United States in a 34-foot motor-home, performing their own hybrid of Country and Gospel music. They rubbed elbows with the likes of Roy Orbison and shared stages with Loretta Lynn and Johnny Cash.

When finances were tight, the kids busked in the streets, surviving on spare change and tips. During the ‘90s, the Neilson’s played state fairs, festivals and prisons. They also appeared regularly on radio and television. Their 1996 single, “Windows To The Past” was a Top 20 hit on Canada’s Country charts. The follow-up song, “We’ll Hold On” made it to the Top 40. That same year they released their self-titled debut album.

In her early 20s, Tami visited New Zealand and fell in love. A long-distance romance ensued, and she racked up plenty frequent flyer miles in three years. Finally, she pulled up stakes and relocated there permanently. Country music wasn’t exactly at the forefront of the Auckland scene, but her new husband Grant had already established a career in law enforcement.

Naturally she struggled for a bit, but by 2008, she had released her solo debut, Red Dirt Angel. Not only did it win a Tui (New Zealand’s equivalent to the Grammy) for Best Country Album in 2009, but she repeated that feat in 2010 and 2011 with The Kitchen Table Sessions, Volume One and Volume Two, respectively.

Her 2014 effort, Dynamite! topped the NZ charts, garnering her fourth Tui and received distribution in North America. In between juggling marriage and motherhood, she also created music with her brother Jay, scoring “The Brokenwood Mysteries,” a popular Kiwi TV series. Her next album, Don’t Be Afraid, released in 2015, debuted at #3 on the charts, and netted yet another Tui.

For the last 10 years, Tami has crafted a look, something like ‘50s Pin-Up Girl-meets-Cowboy Sweetheart, (think glamour girl Betty Page with a hint of early Loretta Lynn). But more importantly, she’s crafted a sound, wrapping her big voice around classic, yet disparate inspirations, from the holy trinity of Patsy, Loretta, and Dolly, to the Staple Singers, B.B. King, Etta James and Sun Records. With her new record, Sassafrass!, she has distilled those influences and also broadened her musical horizons.

Heeding the infamous Canadian/Kiwi saying, “Go Big Or Go Home,” (What? That isn’t a Canadian/Kiwi saying? It should be), the album opens guns blazing with “Stay Outta My Business.” Bleating horns snappy hand-claps power this swiveling Soul-Shouter. But none of crack instrumentation can compete with Tami’s brassy vocal delivery. Trenchant lyrics build off the foundation of the classic Bessie Smith cut, “Tain’t Nobody’s Biz-ness.” Defiant and no-nonsense, the final verse points up gender politic hypocrisies and the perennial double standard; “A woman stay home to raise the babies, ‘must be nice to do nothing, must be lazy’/And so she go out to make the money, ‘How can you leave your babies you’re a bad, bad mummy’” Theremin-esque guitar riffs snake through the arrangement, adding a kitschy, ‘50s Sci-Fi edge.

Tami’s protean talent allows her to hopscotch from one genre to the next with casual aplomb. “Diamond Ring” is a fat slab of sanctified Funk. Serpentine guitars connect with spatial keys and a snap-back beat. The slink and syncopation nearly distracts from this gritty tale of heartbreak. Reeling from a broken relationship, Tami vows “If there’s a table for one, then I’m going to take it, won’t hand over my heart for some fool to break it/Don’t need the pain that lovin’ brings, Ain’t gonna wear no man’s other ring.”

“Devil In A Dress” blends rippling guitar licks, pulsating horns, roiling bass guitar and a ricochet rhythm. It’s the best James Bond theme you’ve never heard. The lyrics unspool a femme fatale yarn rich with detail and some vaguely ecumenical imagery; “White smoke curling from her lips, rosary running through her fingertips/Tight skirt wiggle when she walks, blessing on the children every time she talks.”

On “Just One Thought Of You” she channels the post-WWII grandeur of Jo Stafford, Kay Starr, Dinah Washington and Keely Smith. Lazy guitar notes shang-a-lang over mournful pedal steel and the yearning in Tami’s voice is palpable. The purple emotion exhibited here; “Down the hall our shadows dance, stars uncross our star-crossed romance/One more final chance to whisper all the things I should have said this time” wouldn’t seem out of place in a Douglas Sirk film. (Think “Magnificent Obsession” or “Written On The Wind.”)

Finally, rumbling bass guitar, spitfire guitar riffs and a a rat-a-tat-tat backbeat accentuates the feline fun of “Kitty Cat.” A playful Rockabilly rave-up, it extends the whole fickle and finicky Woman-as-cat metaphor. “She may wave her tail in your direction, show you a little love and affection/Lick and purr and give you a scratch, but that don’t mean she’s your Kitty Cat.”

A couple of tracks, “Bananas” and “Smoking Gun” offer cogent commentaries the continued struggle for equality between the sexes. They also get ahead of the “#metoomovement.” The melody of the former mines the same Calypso style popularized by Harry Belafonte. The infectious Afro-Caribbean lilt, propelled by a canboulay beat, shimmery guitar, swooping pedal steel and honking baritone Sax, nearly camouflages a sharp treatise on that ever-present Glass ceiling. She notes “This is a big boys’ game,” women still have to work twice as hard and display a sweet (non-threatening) demeanor to get ahead in work and life. Of course, equating male genitalia to dangling yellow jungle fruit ensures that Tami’s sense of humor is at the forefront.

The melody of the latter feels nocturnal and foreboding tensile guitar chords slither around a tumbling rhythm. Lyrics like “Skeletons rattle inside, dark and dirty secrets ‘neath the Hollywood sign/Paid up their ransom in flesh to the piper with The power to destroy or bless” have a ripped from the headlines verisimilitude, especially in the light of Harvey Weinstein’s recent arrest.

“Sassafrass!” is packed with dazzling songs, still, three tracks stand out. “A Woman’s Pain” mines the same Southern Gothic territory as Bobbie Gentry’s “Ode To Billie Joe” without tipping over into the melodrama Of Vicki Lawrence’s “The Night The Lights Went Out In Georgia.”

It’s a classic story-song cloaked in jangly acoustic guitars, a swooping string section, stately baritone guitar and high lonesome pedal steel. With a few deft strokes she highlights the skewed power dynamic that exists between the sexes; “Partake of pleasure and reap the shame, the hand that holds the power assigns the blame/And this old world turns on a woman’s pain.”

“Manitoba Sunrise At Motel 6” is equal parts torch and twang. A homesick ode told from life on the road, the rich imagery recalls the expansive beauty and inherent sadness of Jimmy Webb’s “Wichita Lineman.” Her narrative prowess is concise, yet evocative; “8000 miles from home, I just looked it up, this ain’t my bed, my TV or my coffee cup/Silence fills my head like the snow hits the ground, a line of pillows next to me that never make a sound.” Desolate, devastating and beautiful.

Finally, “Miss Jones” is the album’s centerpiece. A Soul-Shake Boogaloo replete with rubbery bass lines, chicken-scratch guitar, flashy horns and a bongo/conga-riffic backbeat. A fiery homage to the late great soul-shouter Sharon Jones, the lyrics insist that even though she’s left this earthly plane her voice is still being heard; “Genuine real deal, girl has always kept it real, don’t you she’s still here, can’t you hear her sing/Heavens yes, hell no, this ain’t mama’s last show, teachin’ angels don’t you know to get up off their things.”

The album closes with “Good Man,” a sweet encomium to her husband. Slow as molasses, it shares some musical DNA with Dorothy Moore’s ‘70s Soul classic, “Misty Blue.” Liquid guitar licks cascade over thudding percussion and incandescent strings. Tami’s compelling vocals are front and center as she acknowledges “I know I’m not easy, but getting things easy was never your style/And I love you like nobody else baby, the good and the hard times they’re just the same, when I got you by my side.” It’s a heartfelt and elegant end to a superlative record.

The record was produced by Tami and Ben Edwards and features her Hot Rockin’ Band Of Rhythm; Joe McCallum on drums and percussion, bassist Mike Hall, guitarists Neil Watson and Brett Adams, plus Tami on acoustic guitar. The band was augmented by the string section of Dave Khan and Anita Clark, the horn section of Gwyn Reynolds, Cameron Pearce, Scott Taitoko and Reuben Derrick and the backing vocal talents of Nyree Huyser, Sarena Close and Georgie Clifford. All the songs were written by Tami, or co-written with her brother Jay.

The world is currently an angry, divisive place. Sassafrass! feels like a breath of fresh air; topical and whimsical, soulful and sarcastic, sometimes danceable and often reflective. Tami Neilson is the real deal, she’s done all the hard work, all you need to do now is sit back and listen.