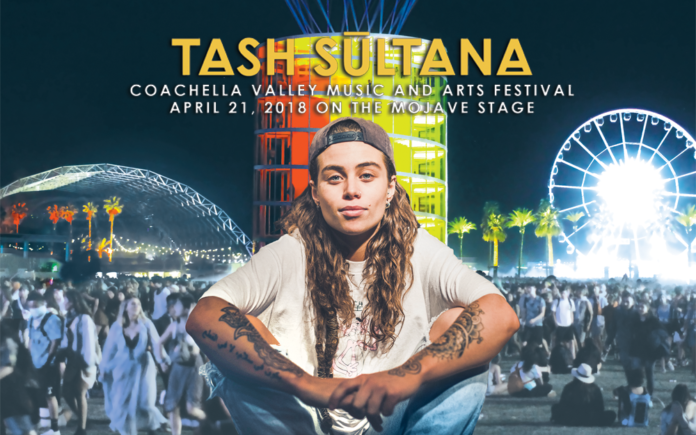 Performing at Coachella Saturday, April 21 at 7:20 on the Mojave Stage

There’s no denying that Tash Sultana’s electrifying performance at Weekend 1 of Coachella was one of the best of the weekend.

This one woman show is a phenomenal talent and a force to be reckoned with.

Sultana came out and played so many instruments it was hard to keep up: acoustic and electric guitar, drum kit, trumpet, keyboard, flute, harmonica, just to name a few. And she kicked ass with every one of them. She also has the voice of an angel with a flawless crystalline quality that is mesmerizing. But make no mistake she can sing with a sultry grit and growl as well.

Sultana made a name for herself performing on the streets of Melbourne with no promo and having homemade videos go viral online getting tens of millions of views.

She taught herself how to play guitar at age 3 with over 20 other instruments in her arsenal. She truly has a gift to be able to draw her audience in and hold them captive.

Sultana has sold out every headline theatre show booked across multiple countries and played dozens of high profile festivals around the globe. Having her on the Coachella lineup is a treat for all of us in attendance.

Her hit singles “Jungle” and “Notion” were quick to receive high rotation on triple j with “Jungle” picking up rotation on alternative stations across North America & Europe.

She re-released the Notion EP on December 19, 2016. She has also released two stand-alone tracks “Mystik” and “Murder to the Mind”.

It’s easy to see why Sultana is in high demand and why everyone attending next week’s Coachella Weekend 2 should check her out. She plays the Mojave Stage at 7:20 on Saturday night.

Here is our interview with Sultana.

You are quite amazing as a one woman show. Is there a reason you don’t include other musicians in your show? Are you willing to collaborate with other artists in your concerts?

Sultana: “It’s not about that. It’s about live looping which is what I do – I don’t need other people to fill the parts that I can do on my own. That’s the point of the performance – I’m not a band.”

What is the most difficult thing to be on your own on the stage?

Sultana: “I suppose if you fuck up it’s all on you. If you’re not having the best day you have no one to fall back on and it shows in every aspect of your performance because it’s just you on stage.”

On your recordings you play all the musical instruments. Was it a challenge to put all that in a live show?

Sultana: “Definitely. It took years of designing my busking rig and I busked every single day until I started playing my own shows.”

How has music helped you overcome difficult times?

Sultana: “Music is my only fall back when I feel like I can’t understand anything around me. I can go pretty dark sometimes – I don’t really understand why things are the way they are or how they are on the outside world. Sometimes music is the only thing I can understand during those times.”

Describe the essence of your music?

Sultana “It’s a little slice of all the music I like.”

What advice would you give to other young musicians like you that want to become professional?

Sultana: “Fuck what your teacher says.”

What was the key to your music reaching different parts of the world?

Sultana: “I just do my thing and people can see that joy and passion doesn’t need a language. It’s just a universal connection you have.”

What do you think were the key moments that marked your career in the past year and a half?

Sultana: “I think realizing I had been on tour too long. Realizing I need to go home, have a break and get myself into a better headspace – then coming back and smashing it out in different countries.”

You started singing in the streets of Melbourne and now you play in big stages, what factor remains the same even though your career has evolved?

Out of all the instruments that you play, which one was the most difficult to learn? Which one represents more who you are?

Sultana: “Guitar is just me – always has been, always will be.

And the trumpet is really fucking hard.”

It is so difficult to stand out in a platform like YouTube, why do you think you shined in the middle of so many videos?

Sultana: “I honestly think it’s up to the people who watch the videos. I can upload a video, but if no one cares about it and no one connects with the video then there is really no purpose for it. I feel people can resonate with it and it’s turned out pretty good for me.”

How is it different now that you’ve achieved some success from those days when you weren’t famous and played mostly for you and friends?

Sultana: “I still sing for me and my friends, but now I am doing for my fans too…cause I have a few of them now.”

What is the most exciting part of getting the recognition you have now?

Sultana: “I just didn’t really expect for it to go the way it did. My struggle has never been playing music or touring. My struggle has been internal, so the way that things have turned out, probably look pretty glamorous to some people on the outside, but it has been pretty fucking hard at some points – not career wise, but personal and mental well-being. You can’t associate that with outward success because if you’re mental health is shit then it is pretty hard to cope with everything else. It doesn’t make you happy if you’re not happy inside.”

Social media was the platform that helped you bring your music to the masses. How do you feel about social media in general? What pros and cons do you find?

Sultana: “Social media is the angel and the devil at the same time. Social media can create a space that is positive for people to get their music out there and get good constructive feedback. But then there are a bunch of assholes that try and fuck you up – they suck.”

What is your first memory of listening to music and actually getting caught by it? Any particular artists, a performance, a single on the radio, an album your parents played?

Sultana: “The first time I listened to Pink Floyd – Dark Side of the Moon. They had production in that album that was a world first at the time.”

Give us 5 female artists that highly influenced you?

What is your favorite album of all time?

How did you feel the first time that you played a sold out concert?

Sultana: “Everyone thinks it was fast but it wasn’t. I’ve been working my ass off every single day of my life and i’ve been playing gigs since I was 12/13 years old. Now 23 years old – that’s 10 years of really hard work that never happened over night – it took years.”

What song do you enjoy the most playing live?

How did you compose “Jungle”?

Sultana: “I was in my bedroom in a shit mood and jamming. At the end of the day I had finished a song. I didn’t think about and I wasn’t trying to write a song. It turns out that song has completely changed my whole career.”

What has been your role as BeyondBlue Foundation’s ambassador? How important is its work?

Sultana: “I talk openly about how much I have struggled with shit internally and I’m not ashamed of any of that. I am not going to stop pushing that out there because that’s what happens to some people. Some people will never understand what it’s like to not understand yourself and the world outside. It’s not just a sadness but sickness and I think that I didn’t really realize what was happening to me was a thing – I just thought I was going to die.”

What’s the most exciting part of going on tour?

Sultana: “It’s all one really long road. If I had more time I would travel more because when you are touring in a different place it’s not about the travel it’s about playing a show. When you end up in a different country with people speaking in a different language pretty much every day and they are all vibing on your music – that’s pretty cool.”

What is the most exhausting part of it?

Sultana: “Being away from my friends and family and my dog.”