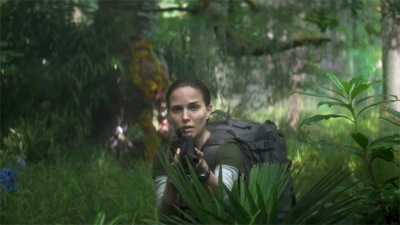 Alex Garland’s breathtaking and smart horror shocker, based on the initial tale in Jeff VanderMeer’s best-selling Southern Reach Trilogy, is filled with visual delights and challenging themes that will tickle and tease your mind, eyes and maybe dreams in ways only movies can do.  This wonderfully odd and disturbing film will linger long in the mind after final fade out.

Natalie Portman is a biologist and former soldier whose husband Kane (Oscar Isaac), assumed to be dead, suddenly appears after a year’s absence.  He’s obviously shell-shocked.  Even worse, he’s unable to explain where’s he’s been or what happened. 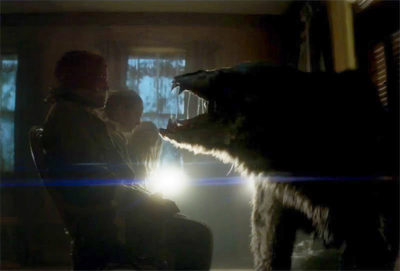 Soon, an all female team of scientists (Portman, Jennifer Jason Leigh, Gina Rodrigues, and Tessa Thompson) investigate and discover a “possessed” and lush Florida forest that is energized by a terrifying and mysterious “shimmer” that apparently enables or energizes all sorts of inexplicable terrors, including very real and dangerous monsters.  Nothing here is what you might guess and the ideas explored are as surprising as they are provocative.

There’s a lot we don’t know between creation and chaos.  And after seeing this compelling film, you’ll understand why it’s probably best left that way.  I was glued to my seat and could hardly breathe as the women moved deeper into the redolent and eerie forest to solve the mystery of what’s going on – and why.  Trust me, it’s nothing you could possibly guess. 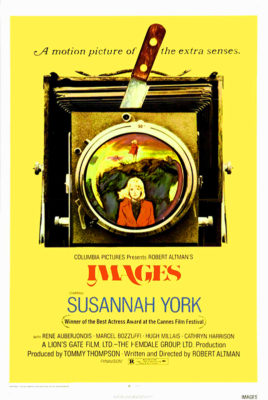 The late and lauded writer-director Robert Altman claims he once saw a couple embracing near an open door.  He looked away for a few seconds and when his gaze returned to the pair, the man stepped behind the door and when he quickly returned to continue the embrace, he appeared to be a different person.  This odd incident haunted Altman and led to the creation of “Images.”

Originally conceived in the mid-sixties, Robert Altman’s mostly forgotten film centers on a children’s author (Susannah York)) whose husband (Rene Auberjonois) may or may not be having an affair.

While holidaying in Ireland, her mental state becomes increasingly unstable resulting in extreme paranoia, hallucinations and unsettling visions of a doppelganger.  All the while her narration of the poetic and fanciful Children’s book she’s composing continues.

Altman creates a lucid vision of what a schizophrenic breakdown might feel like and lets logic and caution fall by the wayside of wondrous beauty as she attempts to excise her demons.

For her unforgettable portrayal, Susannah York won the Best Actress Award at the Cannes Film Festival. 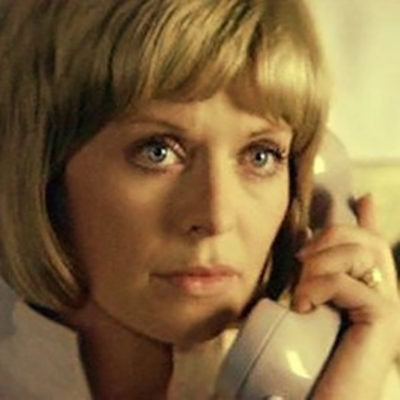 Vilmos Zsigmond’s striking cinematography is perfectly captured in this brand new High Definition 4K scan of the original camera negative.  John Williams’ score along with “sounds” created/composd by Stormu Yamash’ta (“The Man Who Fell to Earth”) add immeasurably to the crazy, and sometimes bloody dreamlike ambiance of this memorable and singular film.