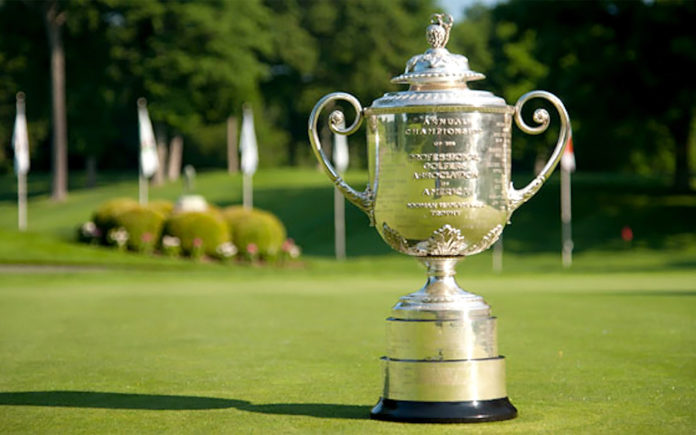 It’s the last chance to grab some major silverware in 2018, so it’s little surprise that some 110 of the world’s top 112 players will tee up at Bellerive – Europeans Joost Luiten and Bernd Wiesberger the only absentees with respective wrist injuries.

There are concerns about the back spasms which kept Justin Rose out of the WGC-Bridgestone, but he is expected to take his place in the field on Thursday.

If you think you’ve heard the name ‘Bellerive Country Club’ before then maybe you have: it has hosted prior editions of the standard and senior US Open and PGA Championship before, as well as the BMW Championship in 2008.

Based in a suburb of St Louis, Missouri, Bellerive was first designed by Robert Trent-Jones in 1960, with a large overhaul coming in 2006 from his son, Rees Jones, an architect known as the ‘Open doctor’ for his work on Winged Foot and Torrey Pines.

Built around a creek which creates a hazard on nine holes, Bellerive will play as a Par 70 this week with just two Par 5s and at a lengthy yardage of roughly 7,300 yards, depending on tee placement.

The Bentgrass greens are large, as per Trent-Jones’ original design, but have been complicated since with the introduction of ‘greens within a green’: layers and ‘transitions’ with the green complexes themselves. You can expect little tiers and shelves to complicate matters and place an emphasis on accurate approach.

The fairways are Zoysia, the strain of grass typically native to parts of Africa. Both Gary Player and Nick Price have won here, so perhaps that is an angle that the South African players will enjoy this week.

Those who have walked the course have commented on the back nine in particular which appears to feature some outstanding holes. The eleventh will be a drivable Par 4, a move which was dictated when a pot bunker was removed by Rees Jones, although the players are well served to watch out for the pond that protects the right-hand side of the green.

Holes 13-16 are on the ridgeline, which means some dramatic elevation changes and elegant visuals for players off the tee.

And the 17th is a 597-yard behemoth of a Par 5, which is lined by the creek down the right-hand side. Will the field lay-up or attack the green?

I’ll take DJ and his buddy Koepka to both finish top 5. DJ played great Sunday of last week and should take that good vibe into this week. He’s due to win at least one this year, isn’t he? G’Luck!