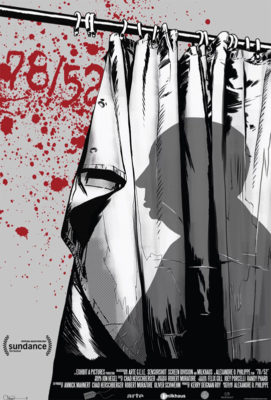 Has any other movie set piece taken on the mythic power of that disturbing sequence?  Probably not.  Hitchcock wanted to shoot on a modest budget and in black and white to imbue the film as “rough, raw and mean.”  Furthermore, it was unheard of to kill off the star a third of the way into the story.  That was what most disturbed the audience, adding a gut wrenching twist to the frenzied visuals of the stabbing in the shower.

Documentary filmmaker Philippe has built an entire feature film around this truly legendary moment, in not only movie history, but also our shared pop culture.

The title refers to 78 camera set-ups and 52 edits.  When I was taking film classes (USC), we did a count of the camera angles and cuts in the three minutes it takes for the onscreen murder “unspool”  and came up with 77 for the former and only 50 for the latter.  But that is of no matter, really.  The shower sequence was shot in 1959 between December 17 and 25. 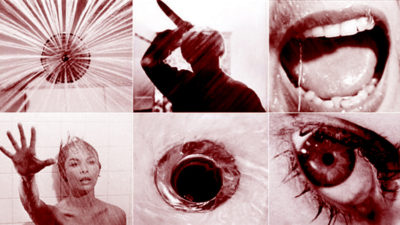 By the way, it has been pointed out numerous times that at no time is there a shot of the killer’s knife actually penetrating flesh.  But a very careful frame-by-frame examination shows otherwise.  For a fraction of a second, one brief shot shows the tip of the blade cutting Janet Leigh’s abdomen. No doubt Hitchcock wanted that subliminal shot (nice use of invisible prosthetics) to up the visceral terror of that frenzied attack.

I never met Hitchcock, but saw him once at Universal Studios.  He was standing on the front steps of his office-bungalow taking in the bright morning sun.  He looked very dapper in his beautiful tailored (Sevile Row no doubt)  black suit and crisp white shirt.  His cheeks were rosy and he looked quite handsome and surprisingly fit for a portly man.  I regret that I didn’t speak with him.  I did notice that the collar of his shirt was oddly bent like the “dog-eared” page in a book.  It was quite noticeable and out of place on a man so otherwise fastidious groomed and dressed.

Later I mentioned the bent collar to someone who knew Hitchcock and worked with him at the studio.  He said, “Hitch does that on purpose.  In fact, he has his shirts made with one collar points bent upward because he believes it’s the flaw in an otherwise perfect setting that is of special interest.”

If you love movies, this wonderful film is not to be missed.

NEW BLU FOR THE HOME THEATER 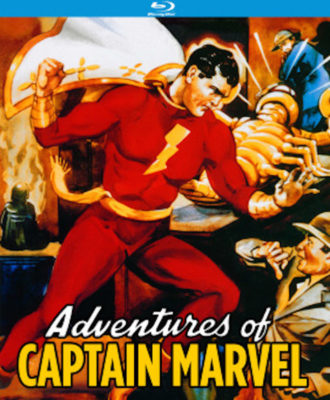 From Paramount Pictures Archives comes this newly re-mastered 4K scan of what many consider the finest serial ever made.

The 12 chapters (216 minutes) chronicle the exploits of Captain Marvel (Tom Tyler), the world’s mightiest mortal, as he combats the Scorpion, a hooded villain intent on obtaining six optical lenses that turn ordinary stones into gold! Highlighting the serial are the fabulous flying sequences created by Republic’s clever special effects team, Harold and Theodore Lydecker.  Combining a wired dummy photographed against real backgrounds in natural sunlight, with spectacular take off leaps and landings supplied by ace stuntman David Sharpe.  This was the first comic book superhero transferred to the silver screen (Max Fleischer’s animated Superman followed a short time later) and the resulting serial is still as exciting and entertaining as when it was initially released.  Directed by the great team of William Witney and John English, who were responsible for making some of the greatest serials of all time including the legendary Daredevils of the Red Circle.

The extra long Chapter One is where we meet all-American kid Billy Batson when he wanders off from an archaeological expedition in a sealed tomb and meets an ancient shaman called Shazam, who gifts Billy with the ability to acquire incredible powers merely by speaking his name.  And voila, in a puff of smoke the boy becomes the mighty, caped, Captain Marvel!  The commentary from film and comic book  (“scholars”) is thorough, dense and fascinating.  Kino-Lorber.  Blu-ray.