Certain cities are known for specific genres of music. Chicago is the home of the Blues, New York is the birthplace of Punk, Detroit, a.k.a. “Hitsville, U.S.A.” spawned the Soulful R&B of Motown and Nashville is the capital of Country music. Los Angeles, well, Los Angeles is the home of everything.

Because the City Of Angels is such a sprawling metropolis, it is a melting pot of races, ethnicities and cultures. Disparate music scenes have always managed to co-exist, sometimes even drafting off seemingly contrary styles to create unique hybrids.

This was best exemplified in the late ‘70s and early ‘80s. Punk had exploded in first in New York and then Great Britain, Los Angeles quickly followed suit. Bands like the Germs, the Plugz and X were the progenitors in Southern California.  It wasn’t long before these artists were adding different textures and colors to the Punk Rock palette.

As X incorporated more ‘50s era roots and Rockabilly into their sound it opened the door for the Blasters and Los Lobos. Rank And File cross-pollenated Country and Punk, creating Cow-Punk, Gun Club took that a step further incorporating trace elements of Blues. Chris Desjardins’ Flesh Eaters were an intoxicating Blues/Jazz/Psychobilly mash-up.

Diving head first into this sweaty musical mosh pit were four bands that became loosely known as the Paisley Underground, Dream Syndicate, Salvation Army (who, after threat of legal action from the venerable charity became the Three O’Clock), Rain Parade and the Bangles. Their inspiration went back to the ‘60s, blending Folk-Rock, Psychedelia and Garage Rock.  Each band inspired rave reviews and devoted followers, but the Bangles drew the most attention as an all-girl anomaly in a male-centric demi-monde.

The daughter of a psychoanalyst and film director, Susannah Hoffs grew up in Los Angeles loving the Beatles, and singing along with classic AM radio.  She began playing guitar in her teens, but by the time she was matriculating at UC Berkeley her primary focus was dance.

That changed when she attended what turned out to be the final shows of the Sex Pistols and Patti Smith Group. She returned home determined to start a band. Placing an ad in the Recycler she became acquainted with Vicki and Debi Peterson. The sisters grew up in the Valley and had been playing guitar and drums since they were kids. They had just finished a stint in a local band called Those Girls.

The trio got together for the first time two days after John Lennon was murdered. They redirected their grief and jammed on Jefferson Airplane’s “White Rabbit.” There was immediate musical symbiosis. They were all equally influenced by the primitive D.I.Y. spirit of Punk and the sunshiny Psychedelia and Garage Rock of the ‘60s.

Originally a three-piece, they were the Colours, and then the Supersonic Bangs.  When bassist Annette Zilinskas joined the fold their name was shortened to the Bangs. They began gigging around L.A. and recorded their debut single “Getting Out Of Hand” in late 1981.

The band released the 7” vinyl on theirown label, DownKiddie Records. It landed in the hands of influential DJ (and unofficial Mayor Of The Sunset Strip), Rodney Bingenheimer. He began playing the song on his KROQ radio show. By April 1982, the Bangs were signed to the Faulty Products label, an offshoot of IRS Records, (home to Oingo Boingo, the Cramps and Wall Of Voodoo).

Two months later, on the eve of releasing their five song EP, they were threatened with a law suit by a New Jersey band also named the Bangs. So they elongated their moniker to the Bangles. By the end of the year they were touring as an opening act for the English Beat.

Between Rodney On The ‘Roq and college radio, the Bangles were making a name for themselves. In March 1983, they appeared on American Bandstand. Apparently, Columbia Records liked what they saw, and they promptly signed the band.

Unfortunately, Annette quit the Bangles, joining the ragged CowPunk collective, Blood On The Saddle.  Michael Steele (ne’ Susan Nancy Thomas), who had been in the original line-up of the Runaways, stepped in and assumed bass duties.

Their full-length, major label debut, All Over The Place arrived in 1984. It received rave reviews, garnered airplay on MTV and peaked at #80 on the charts. It also brought them to the attention of Prince, who was actually in the audience when the band headlined a show at the Palace in Hollywood.

Two years later when they released their sophomore long-player, Different Light, they were armed with a secret weapon. “Manic Monday,” the first track and lead-off single, was penned by “Christopher,” a not-so-secret pseudonym of his Royal Purple Majesty, Prince. It was a great song, and it skyrocketed up the charts, peaking at #2. The album was a huge success.

Unfortunately, the record company succeeded in sanding away the quartet’s rough edges, turning them into reluctant sex symbols.  Chafing at their new glamorous image, and the media’s myopic fixation on Hoffs, there was some dissention in the ranks. They recorded one more album, the sleek and streamlined Everything in 1988. It included the execrable “Eternal Flame” ballad, which actually made it to #1. But the Bangles came apart at the seams in the early ‘90s, and soon called it quits.

Everyone still continued making music; Vicki played with the Continental Drifters and teamed with Susan Cowsill as the Psycho Sisters. Debi formed Kindred Spirit, Michael played in several bands including Crash Wisdom and Eyesore. Of course, Columbia Records launched a high profile solo career for Susannah Hoffs, but the two records she made in 1991 and 1996 sank without a trace.

At the turn of the 21st century the four-piece was persuaded to reunite and record a song for the second Austin Powers movie Susannah’s husband, Jay Roach, directed all three Psychedelic spoofs). In 2003 they released their fourth full-length, Doll Revolution. The title track was a trenchant re-working of the Elvis Costello song.  A tour followed.

Eight years later they returned with Sweetheart Of The Sun, produced by Matthew Sweet. Having recently collaborated with Susannah on a couple Under The Covers records (the pair covered favorite hits from the ‘60s in volume one and the ‘70s in volume two), he seemed like an excellent choice.

Sweetheart… actually was kind of perfect, exactly what the Bangles might have sounded like after All Over The Place. If only their label hadn’t been hell bent on turning them into New Wave sex kittens. Unfortunately, Michael Steele wasn’t satisfied with the limited touring schedule and quit the band.

These days the Bangles survive as a trio, playing, recording and touring when it suits them. They recently raided their archives and with the help of Omnivore Recordings (fast becoming the go-to label for all things cool), curated an album filled with early recordings, demos, live tracks and essential ephemera. 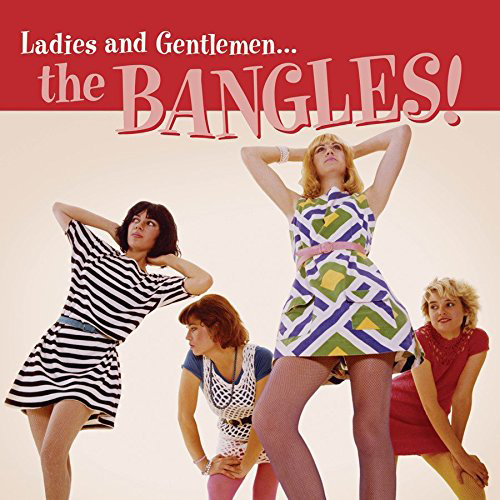 Ladies and Gentlemen…The Bangles! kicks into gear with a surprisingly muscular instrumental, “Bitchen Summer/Speedway.”  Ambient noise and a whispery intro (“ladies and gentlemen the Bangs”), is followed by a cartoon explosion.  The track is propelled by a pummeling “Hawaii 5-0” backbeat, thrumming bass lines and rippling guitar licks that fuzz, buzz and yowl.  It’s a loving surf/spy pastiche that wouldn’t be out of place in one of those teen exploitation movies that played exclusively at the drive-in.

The album presents the band’s self-titled five song EP in its entirety on CD for the very first time. Even now, it’s hard to believe the Bangles had been together just a year when they recorded these epochal songs.

Honeyed harmonies belie the helplessly hoping tone of   “I’m In Line.”  Debbi takes the lead, asserting her independence; “I don’t want to waste my time waiting on some guy to change his mind/ You don’t even notice standing in the shadows, and I can’t tell you why.”  The melody is buoyed by elastic bass lines, an insistent Tom-Tom beat and guitars that are sharp, stinging and shagadelic.

“Want You” is the Bangles at their Punkiest. The melody is a sun-kissed kissin’ cousin to the “Batman” theme, powered by a frenetic back-beat, scorching guitars and Vicki’s exigent vocals.  Conversely, “Mary Street” feels like the musical love child of the Byrds and the Left Banke. It opens with pinwheeling guitar riffs that jingle and jangle in the morning, while their vocal alchemy goes for baroque.

The EP closes out with a rollicking cover of “How Is The Air Up There.” Written by Steve Duboff and Artie Kornfeld, (best known as the music promoter for Woodstock), for their band Changing Times, it was also recorded by New Zealand’s La-De-Das.

A fairly obscure Garage Rock nugget, both ‘60s versions are shambolic and slightly Dylanesque. The Bangles’ rendition is gritty, but concise. The drums pound out a tribal tattoo, bass and guitar follow suit and Annette Zilinskas adds some high lonesome harmonica. Vicki vocals are out in front. Her sardonic tone magnifies the lyrics’ sharp, ruling class rebuke.

If the album ended there, that would certainly be satisfactory, but Ladies and Gentlemen… offers up so much more. First up is the Bangs’ double-sided debut single, “Getting Out Of Hand” backed with “Call On Me.” The original 7” vinyl fetches as much as $400.00 on record collector sites and it’s easy to see why.

The former is anchored by walking bass lines and a tick-tock beat. Over shimmery harmonies, Susannah’s sunshiny mien camouflages suspicions of infidelity. For their nascent effort song is ridiculously self-assured.

The latter was co-written by Dave Roback (the Rain Parade front man who went on to create Opal and Mazzy Star). It’s accented by a triple time handclap rhythm, roiling bass and fleet fretwork. It’s an infectious workout that might inspire the listener to revisit ‘60s dance crazes like the Frug and the Hully Gully.

The demos are made up of slightly less polished takes on the aforementioned “The Real World” and “Call On Me.” The Bangs also add their effervescent imprimatur to a couple of ‘60s classics. First up is “Outside Chance,” a Warren Zevon song made famous by the Turtles. It’s followed by Paul Revere And The Raiders’ “Steppin’ Out.” Here it’s recalibrated as a growly Garage-Psych freak-out.

The live tracks are the only songs from Michael Steele’s tenure in the band. They include a scorching take on “Tell Me,” from the All Over The Place album, along with a wicked version of the feral Love classic, “7&7 Is.” (This was actually recorded at the 1984 show Prince attended.)

The album closes with a couple of throwaways, which are actually surprisingly potent. “No Mag Commercial” is a winsome homage to the underground Hollywood music fanzine. Tongue firmly in cheek, it recalls the halcyon days when the Rolling Stones did Rice Krispies jingles. The final track is “Rock & Roll Alternative Program Theme Song,” a raucous rave-up created especially for the legendary Post-Punk radio show on KZEW in Dallas-Fort Worth.

Although these songs were recorded back in the early ‘80s, in a blind Pepsi challenge they fit hand in glove with current tracks by L.A. tastemakers like Bleached and Best Coast.  35 years ago three musicians cast a backward glance toward a sound that the world had rendered anachronistic. Giving it their own spin, they managed reach the top of the charts and make history. Sure, this collection was created for Bangles super-fans and completists, but these songs truly stand the test of time.