The Beatles are such a ubiquitous presence in music that it’s easy to kind of take them for granted. People tend to forget that (along with Elvis Presley and Bob Dylan), these four lads from Liverpool forever altered the course of Rock N’ Roll.

John Lennon, Paul McCartney, George Harrison and Ringo Starr were born during World War II and grew up in modest circumstances in the sea port town of Liverpool. Separately, each had become electrified by the primitive sounds of Rock N’ Roll emanating from America. Of course, Elvis Presley was their gateway drug, but pretty soon each boy was digging deeper into their shared Rock N’ Roll addictions, discovering Buddy Holly, Eddie Cochran and Gene Vincent.

In turn, that exploration led them to true progenitors like Chuck Berry, Little Richard, Bo Diddley and Fats Domino. Then it was on to Blues pioneers like Big Bill Broonzy and Elmore James. In 1958, 15 year-old Paul met 17 year-old John when the latter was performing with his first band, the Quarrymen. Rather quickly, Paul joined the band.

Not long after, Paul introduced John to 14 year-old George, who basically auditioned as John’s friend and band-mate by playing a note-perfect rendition of the tricky guitar instrumental, “Raunchy.” He was only 14, but he was invited to join the band. By 1960, the trio became the Beatles, their line-up made complete by Stu Sutcliffe on bass and Pete Best on drums.

The band really began honing their chops during a three month residency at a nightclub in Hamburg, Germany. Situated in the heart of the city’s Red Light district, the boys would play eight hours at a time, their sets fueled by alcohol and amphetamines. Not only were they perfecting versions of their favorite American Rock and R&B songs, they also began writing their own songs. All told, on and off, they spent two years in Germany, returning to Liverpool, (sans Stuart Sutcliffe), as seasoned performers.

By 1962, Paul took over bass duties and the Beatles began playing at Liverpool’s Cavern Club, building a local following. Soon they were being managed by Brian Epstein and finally signed a record deal with Parlophone/EMI.

As they met with producer, George Martin, he determined that Pete Best wasn’t up to snuff, so the lads recruited old pal Ringo Starr (ne’ Richard Starkey), who had been behind the kit with Rory Storm And The Hurricanes. The four-piece went into Abbey Road Studios in London to record the Lennon-McCartney composition, “Love Me Do” and made history.

It took more than a year for America to catch on, but the Beatles literally saved Rock N’ Roll. Long considered a noisy fad, it seemed to fade a bit when Elvis entered the Army in 1960. Attempting to take his place, a surfeit of safe, (i.e. wholesome, bland and boring), Teen Idols started climbing the charts. Their vanilla appeal began to neuter the dangerous energy of real Rock N’ Roll. Even when Elvis returned from the Army his manager restricted his musical output to insipid songs from his movie soundtracks.

In early 1964 America was collectively reeling from the shocking assassination of President Kennedy. The British Invasion, spearheaded by the Beatles, represented a breath of fresh air. Beatlemania swept the nation. Some of that excitement is captured in Ron Howard’s new Beatles documentary, “Eight Days A Week.” It offers a snapshot of the band during their touring years, from 1964 to 1966.

The Fab Four famously quit touring in 1966 because it seemed like an exercise in futility. Even with the latest 1960s technology, their music could hardly be heard over the hysterical screams of their passionate fans. Playing live became a frustrating exercise in futility. 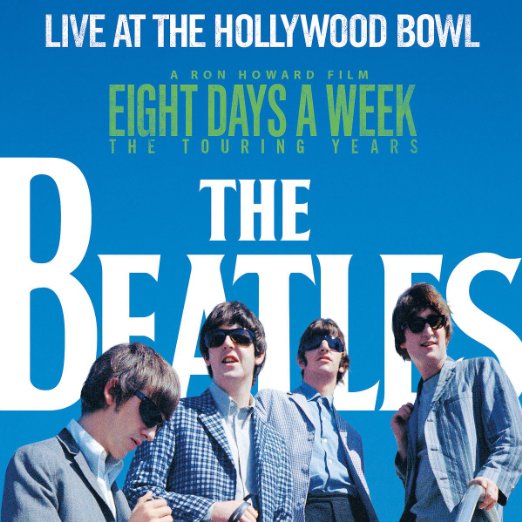 To accompany the film, Apple Records is re-issued the only authorized live Beatles album, Live At The Hollywood Bowl. Originally released on LP, cassette and 8-track in 1977, this is the first time it’s been available on Compact Disc, (the 180 gram vinyl version arrives in November).

The album opens with the one-two punch of “Twist And Shout” and “She’s A Woman.” Their rollicking take on the Isley Brothers’ soulful cha-cha-cha is powered by chugging guitars and a sturdy backbeat. John’s exuberant lead vocals are countered by Paul, George and Ringo’s patented head-shaking “woos.” From there, they deftly segue into “She’s A Woman,” the B-side from the “I Feel Fine” single. Over a four-on-the-floor rock steady beat, George’s finger-picking lead guitar snakes around Paul’s yelping, Little Richard-style vocals.

The Beatles played at the Hollywood Bowl for one night in August 1964 and for two August nights in ’65. Cuts from all three shows are seamlessly interwoven. A number of songs were culled from the phenomenal soundtrack to their film debut, A Hard Day’s Night.

First up is “Can’t Buy Me Love.” Brash and buoyant, it’s one of the few songs where the hooky chorus is front and center, opening the song. Paul’s flippant assertion, “I don’t care too much for money, money can’t buy me love” is backed up by George’s blistering lead guitar break.

The dreamy “Things We Said Today” begins tentatively with quiet verses accented by descending guitar chords. On the bridge it accelerates wildly, as the pensive nostalgia of the lyrics give way to this passionate declaration; “Me, I’m just the lucky kind, love to hear you say that love is luck/And though we may be blind, love is here to stay and that’s enough.”

The effervescent guitar licks that power “You Can’t Do That” nearly camouflage John’s inherent machismo and casual misogyny. Jealousy became an ongoing theme in his lyrics and the green-eyed monster rears ugly head in couplets like “I got something to say that might ‘cause you pain, if I catch you talking to that boy again I’m going to let you down and leave you flat/Because I told you before, no, you can’t do that.”

Even at this relatively early point in their career, the Beatles had already released four albums and had amassed nearly 50 original songs, but their live sets were still peppered with the classic songs that continued to inspire them. From Larry Williams’ wailing rave-up, “Dizzy Miss Lizzy,” to Chuck Berry’s prickly anthem “Roll Over Beethoven,” to the incendiary 12-bar blues of Little Richard’s “Long Tall Sally,” it’s obvious that these songs remain a blast to perform live. Additionally, tracks like the Shirelles hit, “Boys” and the Rockabilly stomp of Carl Perkins’ “Everybody’s Trying To Be My Baby” were tailored to cede the lead vocal spotlight to Ringo and George, respectively.

The band also manages to reach waaaaay back into their early catalog, (roughly 18 months earlier), for caffeinated takes of “All My Loving,” and their first #1 hit in America, “I Want To Hold Your Hand.” John’s slightly sardonic wit is in evidence with this introduction: “the next song we’re going to sing is an oldie, some of you older people might remember, from last year,” before launching into “She Loves You.”

Live At The Hollywood Bowl also includes two tracks from the soundtrack from Help, (their recently released technicolor spy-spoof). “Ticket To Ride” is anchored by Ringo’s fluttery meter and George’s jangly 12 string Rickenbacker guitar. The movie’s title track is a frenetic plea for some emotional rescue. The album closes with a surprising deep cut. The sputtery waltz in 6/8 time, “Baby’s In Black.”

Of course once the Beatles got off the road, they channeled all their creative energy in the studio and in the process, created a brilliant series of records. In roughly five years, over another nine albums, their music encompassed nearly every genre, from Country Rock and Folk, to Baroque Pop, Power Pop and acid-drenched Psychedelia. Hallucinogens simultaneously expanded their minds and their sonic palette.

By 1970, the four were all feeling much less fab and quietly called it quits. A seemingly impromptu rooftop concert at their Apple Records headquarters was their final live public performance. The fresh-faced mop-tops had morphed into beardy intellectuals each chomping at the bit to begin their own solo careers. It was truly the end of an era.
Live At The Hollywood Bowl captures that last gasp of collective innocence. From the squeals of mass hysteria that accompany each song to the exhilarating performances contained herein. Despite the fact that live, they could never really hear themselves or each other, their music was crisp, their harmonies beatific and their humor was always droll. It’s safe to say there will never be another band as great as the Beatles.

Full disclosure: the decrepit (yet nubile) wench that crafts this weekly column was an already-talking-but-still-not-walking nine month old baby when Beatlemania hit America in 1964. Surrounded by obsessed pre-teen and teen cousins, (as the youngest of 25 first cousins), is it such a surprise to know when people would say “I love you” said cherub would respond by singing “yeah, yeah, yeah?” Walking came at 18 months and the talking has never stopped and yes, the Beatles are forever.