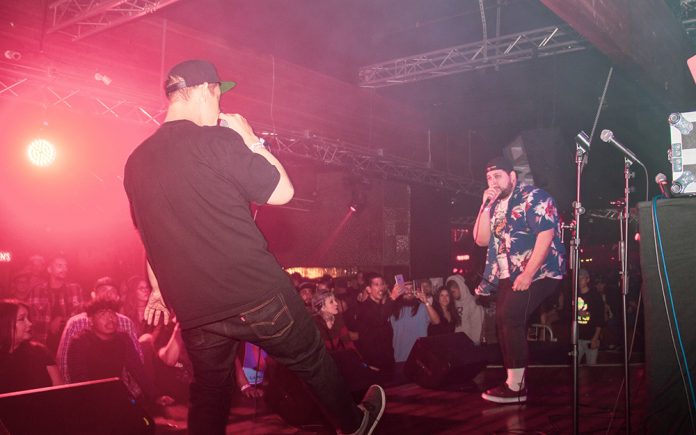 The colossal new EP from The Bermuda, THE MADD GIANTS, will be released on Saturday 11/16/2019. Friends since middle school, IvytheGiant and MaddHatter are prepared to drop their first new music in over three years and declare that it’s their best to date. Always focused on the “big picture,” the duo’s first two releases, The Chronicles and Backyard Hooligans, have compelled them to the release of THE MADD GIANTS. 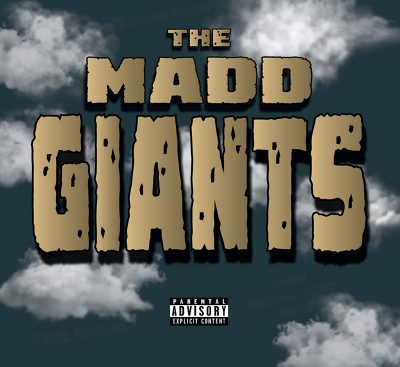 The album features performances from desert natives Porsia Camille, Razor J, and King Serrano of Irie Junctions. The EP was recorded at The Index Room in Palm Desert, CA and mixed and mastered by Crooks.

Production on the album came from all over the world. The Bermuda used producers from Kansas City, Canada and the United Kingdom as well. The artwork and all direction of the project was facilitated by the MADD GIANTS themselves.

Below is the Coachella Valley Weekly review of THE MADD GIANTS.

The intro goes POW! with muted trumpet and a swank drum beat. If Beastie Boys were to release an album now, this is how I would also imagine their intro. Lyrics: “if you ain’t fucking with us, don’t tell us what to do”. This is a punch in the mouth for the naysayers and a notice to supporters to stick around.

The cruising feel-good song on the album; put the top down and blast this song. Lyrics: “Everything’s gonna be okay, everything’s gonna be alright. Everything’s gonna go my way, especially when it’s my life”. King Serrano’s smooth Roots Reggae vibe makes this song the ‘dealing with everyday life’ jam and a great mix of Reggae/R&B and Rap/Hip-Hop. It’s an ‘arch over’ hit and radio ready.

Slower tempo that seems to share about trials and challenges of life and the desire to “go back home” after a series of unfortunate happenings. The truth is there is no going back home. Bad things happen to all people. Although the song appears to seek self-pity, I believe the opposite is true. Home is what you make it no matter the circumstances.

Lyrics: “We rugged, we rugged, we bring the fuckin’ ruckus”. It’s in your face and aggro with a ‘doomy’ bass line. Similar to how Naughty By Nature pulled off the balancing act of releasing big, instantly catchy anthems while maintaining their street-level credibility among the Rap and Hip-Hop faithful, The Bermuda do that with this song and others on the album. The flow is on point.

Jaunty guitar intro sets the coloration of Luminous. All the right lyrics to uplift are here and show the mindfulness of the duo and the place in their career that they currently inhabit. Lyrics: “For me it’s what I feel inside ‘cause I feel fine and now I think that it is time ‘cause it feels right”. There’s a realization that The Bermuda generate their own light to lead the way. A great lyrical run in Spanish shows off some of their diversity and is welcomed.

With a lead-in sample from the Bobby Caldwell hit What You Won’t Do For Love, the song takes that snippet to build a potential R&B-laced hit. Featured here is the sultry inflection of CV songbird Porsia Camille, who is seductively notorious for her enrichment of the Hip-Hop and Rap scene. Guitarist and magician Razor J closes out the last 45 seconds with his blazing fretwork.

THE MADD GIANTS is a triumphant return for The Bermuda. The production and thoughtfulness of the chapter and verse of each song easily surpasses their previous work and matches recently released music from Provoked, Willdabeast and Thoughts Contained. It rigorously touches on every aspect of Hip-Hop and Rap and connects bridges to their not-so-distant cousins Jazz and Rhythm & Blues. If you’re looking to get lost in the next imminent sound, look no further than The Bermuda. Let’s hope the pair use this EP as a springboard to more frequent releases.