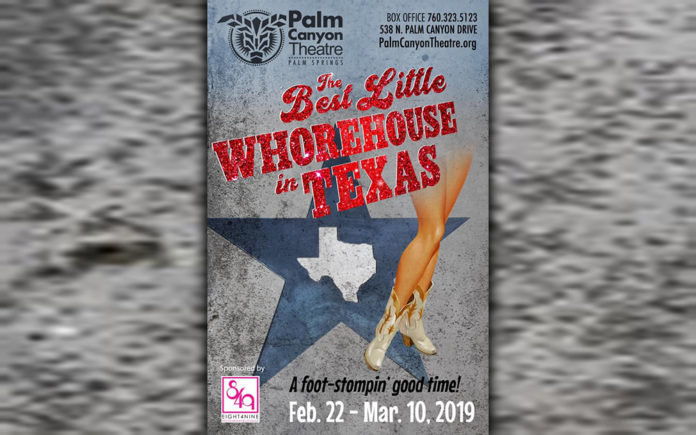 Being the ardent women’s advocate that I am, it isn’t often that I will admit to thoroughly enjoying a show that included whorehouse, in the title.  But Palm Canyon Theatre’s current production of “The Best Little Whorehouse in Texas,” is about as much fun as you can have as a spectator.  Music and lyrics by Carol Hall, Book by Larry L. King and Peter Masterson, ‘Whorehouse’ was inspired by a real life brothel in La Grange Texas, called, ‘The Chicken Ranch,’ which had been in business for more than a century before being closed down in 1973 due to an expose’ by an over zealous TV reporter.

The Best Little Whorehouse in Texas, opened on Broadway in June 1978, just five years after the closure of the original Chicken Ranch. It went on to win multiple Tony’s and Drama Desk Awards.   From all accounts, the musical seemed to hold close to the real story and history of this long-standing establishment.

Miss Mona Stangley, (Jaci Davis,) is the proprietor of the Chicken Ranch, after inheriting it from the previous owner.  She runs a respectable place and all the girls know Miss Mona’s ‘No No Rules.’

Keep your language clean girls, keep your bedrooms neat
And don’t hang around the town cafe and say hi on the street
Mind your P’s and Q’s and manners, and you don’t need no other tools
Cause every girl that lives here knows my special no-no rules
And please don’t show us no tattoos
No hearts and flowers on your thigh

Miss Mona pays her taxes, contributes to the local charities and doesn’t allow her business practices to cause any problems for the locals.  She even maintains a favorable relationship with the town Sheriff, Ed Earl Dodd (Don Kelley.)  But when television watchdog reporter, Melvin P. Thorpe, (Ron Coronado,) catches wind that ‘Texas has a whorehouse in it,’ all hell breaks loose, as he makes it his mission to get the Chicken Ranch closed down.  Laughter, sorrow and a whole lot of singing and dancing ensue while the whole Texas saga is brilliantly played out on the stage.

Davis is such a shining gem in her performance as Miss Mona.  Her vocal abilities are  equaled by few.  Starting with  ‘A lil’ Ole Bitty Pissant Country Place,’ through the ‘Hard Candy Christmas,’ finale, Davis leads this show on an emotional journey that will make you wish she would come and take up business in your home town.

Ron Coronado, as the righteous villain, Melvin P. Thorpe is hysterical with his pompadour hairdo and stylish country boots.  Kelly, gives a wonderful performance as the Sheriff who is used to having his word of law being accepted as the gospel and blows a gasket when faced with opposition.

Jana Gibbony as Angel and Grace Wallace as Shy, two new arrivals at the Chicken Ranch, provide wonderful insight to the circumstances that could bring women into the working girl profession.  Both perform their roles with such empathy and likability that it’s easy to believe they could be someone you know.  Kimberly Cole as Jewel, Miss Mona’s faithful friend and Chicken Ranch domestic staff, gives a rocking performance with her rendition of “Twenty Four Hours of Lovin’.”  This cast ensemble is truly some of the best around.

SE Layne, directs this high-spirited musical and I have to say that I absolutely love her use of the entire auditorium space.  Layne breaks the fourth wall as she stages some of the actor’s entrances from the back of the theatre, rushing past the audience and towards the stage, keeping pace with the excitement and high energy of the production.  If you watch closely you will even see the subtle action going on in the upstairs rooms.

The Best Little Whorehouse in Texas, runs through March 10th.