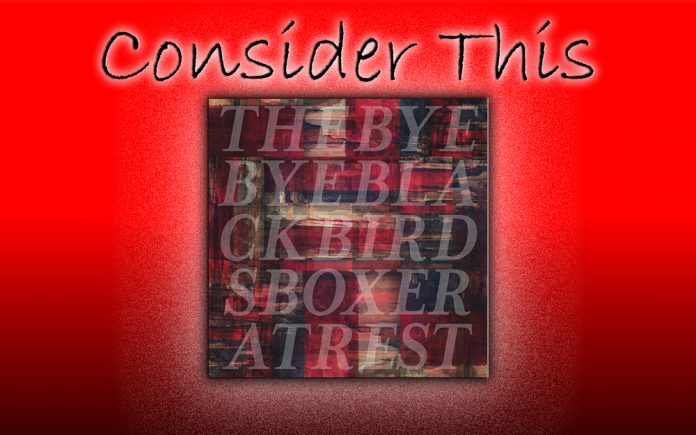 “It’s true, sometimes all our plans fall through, sometimes we play out of tune, nursing our drinks and our wounds”

That’s The Bye Bye Blackbirds waxing philosophical on “You Were All Light,” the opening track from their newest album, “Boxer At Rest.” The Bay Area six-piece, fronted by Bradley Skaught, has been around since the early aughts, having risen from the ashes of his previous band, Belle De Gama.

Originally from Tacoma, Washington, Bradley began taking drum lessons as a kid, inspired by his dad, a talented singer and guitarist. Initially, his tastes were shaped by his parents’ his parents’ music collection. Consequently, original influences included singer-songwriters like Jim Croce, Gordon Lightfoot, and John Denver. Soon enough he discovered the Beach Boys, along with British Invasion bands and the typical Top 40 hits. By the time he was 13, he knew that playing and making music would always be a priority in his life. He had already performed live and had begun deconstructing Pop songs, trying to figure out what made them tick. His older sister sort of introduced him to ‘80s underground and Indie music. Pretty quickly he was soaking up the sounds of R.E.M., the Velvet Underground and everything in between. His family had relocated to Oakland a few years earlier and he cut his teeth as a drummer for Yuji Oniki. Soon after he was fronting Belle De Gamma.

The Bye Bye Blackbirds’ hit the ground running in 2006 with two EPs, Apology Accepted and Honeymoon, and they haven’t looked back. Their official long-player, Houses And Homes arrived in 2008 and was followed in quick succession by Fixed Hearts (2011), We Need Rain (2013) and Take Out The Poison (2017). Their sound was a potent combo-platter of Power Pop, Country Rock, New Wave and Indie Rock. Critical acclaim was nearly unanimous and the band built up a loyal and passionate following. There have been a few line-up changes over the years, but the band currently includes Bradley on guitar and vocals, Aaron Rubin on bass, Lenny Gill on lead guitar, Jozef Becker on drums and KC Bowman and Kelly Atkins on harmony vocals. Now they’ve returned with their most adept collection yet, Boxer At Rest.

The record kicks into gear with “You Were All Light.” Gritty guitars attack and retreat over serpentine bass lines and an insistent beat. Warm lead vocals land somewhere between John Lennon’s playful tenor, Tom Petty’s nasal drawl and Marshall Crenshaw’s Soulful croon. Flickering electric riffs are supplanted by Glam-tastic rhythm guitar as the momentum revs and resolves, salted in the mix is a peppery horn section. The sanguine arrangement and instrumentation belie introspective lyrics like “A chill caught us deep inside, our bones grew fragile, still the roads we haunt will rise up to meet us.”

Every track here leapfrogs effortlessly through a plethora of styles. If the Sweet had collaborated with Burt Bacharach, Lynyrd Skynyrd and 20/20, it might have sounded like “Baby It’s Still You.” The song opens deceptively as fingers slide across the frets of an acoustic guitar, rather quickly, braided electric guitars slip into a Southern Boogie groove, adding wily bass lines and a rattle-trap rhythm. With a mix of encouragement and resentment, the lyrics address an old crush; “Hey girl, when your phone stopped ringing off the hook, did you take a little time just to give us a second look? We’ve been cut loose from somewhere, till we’re no one from nowhere/Who’s that chasing the days? Who’s that pulling the reins, when the world’s not slowing down, Baby, it’s still you.” A hip-hugging horn section shadows the chorus as a sugar rush of guitars ring and chime on the break. On “How Do We Stay,” slashing power chords ride roughshod over bramble-thick rhythm guitars, angular bass lines and a galloping gait. Mournful lyrics like “All we do is love you, and sing your names out, we pulled the anchor and kissed you out to sea,” seem like an oblique reference the Ghost Ship tragedy. But their gravitas is neatly camouflaged by the spiky New Wave arrangement.

Meanwhile, the sparkly “Watch Them Chime” lands somewhere between the Cowsills and the Cosmic Rough Riders. Honeyed harmonies lattice over jangly guitars, nimble bass lines and a walloping backbeat. There’s an inherent melancholia to lyrics like “I know we’ll cry it out forever, we’ll tip the whole town into the sea, and watch it rise, we will, I know we will.” But the effervescent melody keeps the sadness at bay. Two tracks, “So True” and “War Is Still Hell,” find The Bye Bye Blackbirds adding some new colors to their sonic palette. On the former, crisp harmonies wash over reverb-drenched guitars, whispery bass and a snapback beat. As Surf Rock collides with hillbilly twang, reflective lyrics seems to touch on the ephemeral nature of life; “Woke up late in the summertime, speakers sputtered to life/Something caught between stations now, gone, let me quick write it down, gone, feel the flames coming down.”

The latter is an infectious Rockabilly Rave-up replete with walking bass lines, swaggering guitars, Beatlesque harmonies and a staccato handclap rhythm. Apparently, love is war and war is hell, as is evidenced by this incendiary couplet; “Hearts are worn when hearts are open, stitch them up after they’re open/Light ‘em up when healed and whole, but do they ever burn?” Once again, elastic instrumentation and a buoyant arrangement rescue the song from (to paraphrase Mr. Mojo Risin) wallowing in the mire.

The true outliers on the record are “Words & Signs” and “If It Gets Light.” On “Words..” the achingly sad lyrics; “All the lonely souls that bow like autumn leaves, whiskey glows in dusty rooms I could stand the light without the clouds,” are cocooned in sun-dappled acoustic guitars.

As much as “Words…” is stripped-down, sincere and succinct, “If…” is equally sprawling. This cut takes its cues from bands like the Velvet Underground, Crazy Horse, Gang Of Four and The Dream Syndicate. A pounding backbeat collides with throbbing bass lines, and tensile, rawboned guitars. Locking into a hypnotic groove, guitars stack up, churning one minute, jagged and corrosive the next. Skronky lead riffs and sinewy rhythm notes intertwine, hugging the melody’s hairpin turns. The vocals and lyrics feel almost incidental as the track kicks into interstellar overdrive. Clocking in at nearly eight minutes, it’s an ambitious tour de force and the album’s centerpiece. The record closes with “All Our Friends.” Powered by jingle-jangle guitars, ringing harmonies and a tick-tock beat, the lyrics offer a tender encomium to friends who are gone, but not forgotten; “We’re warm in the winter sun and sad in the spring rain, we watch all the flowers bloom, we name them all after you/Days, we love you all our days.” It’s a wistful end to an elegant album.

The band was aided by a wolfpack of players including Travis Harrison on vibraslap, Bill Swan on trumpet, Tom Greisser and Paul Flum on saxophone. Chris von Sneidern provided additional harmonies and producer Doug Gillard added harmonies, keys, plus acoustic and electric guitars.

The Bye Bye Blackbirds just keep getting better and better. Boxer At Rest exudes a quiet confidence that is simply magical. 2020 will be remembered for a surfeit of sad and depressing facts and statistics. But something fantastic happened, The Bye Bye Blackbirds made one of the best albums of the year.