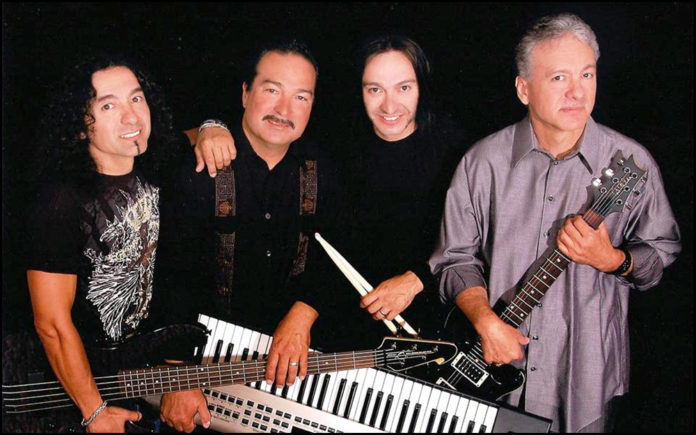 This year’s recipients of the 2018 Coachella Valley Music Award’s Pioneer Award are the Cancino family. Jacinto ‘Chad’ Cancino shared the collective expression of gratitude from the entire Cancino family, “On behalf of my family, it is a true honor to receive the Pioneer Award from the Coachella Valley Music Awards. We feel extremely lucky and blessed to have this recognition.” The Cancino family continues to permeate the world with their music. This legacy and tradition will no doubt carry on for future generations to come.

“Every family attempts to express love for each other and fill the necessary roles to function properly. Every family must also experience conflict and cope with loss. The Cancino family is no different than our families in those capacities. One unique difference is the omnipresence of music within the family. With several generations immersed in the progression of music, the Cancino family continues to make music that shines a beaming light on its members and the Coachella Valley.”

Ruben Cancino, Sr. first taught his children Pancho, Carlos, Benny, Maria, Jorge, Connie, Ruben, Chad and Mike how to play guitar and sing. “Dad taught us what he knew, guitar and voice,” Chad remembers. The elder Cancino performed with his group Trio Arco Iris and as a mariachi. “The music came from my dad. He was poor and had no means of making money. I recall hearing him talk about shining shoes to buy a guitar. He grew up during the Mexican version of the ‘Great Depression’. He had a passion for music because he taught himself how to play. He also sang, played the bass and accordion,” Mike reminisces. “Then we could choose any instrument we wanted. It’s like teaching your kid Spanish first. Because they knew we would learn English anyway.” The Cancino’s mother Julia was a vocalist in the church.

With their parents departed for several years now the Cancinos have continued to blaze the trail their parents started in the early 1900’s. In speaking with the family, their love for each other is big as life. They appreciate that without the strong encouragement by their father they would not enjoy the enthusiasm they have for music today. Mike Cancino is a multiple 2018 CVMA nominee for Best Band, Best Metal Band, Best Live Performance Band and Best Drummer. As drummer for House of Broken Promises, Mike has toured the world and brought the deserved attention to his family and his community.

Chad may be the second youngest but he is treasured by his siblings for his musical virtuosity. “I played bass first at 7 years old and then gravitated to drums at 9 where I for the most part stayed. I sang while I played drums with encouragement from Benny, my older brother.” Chad has played in Unplugged the Band with John Stanley King, Ray Camacho, Mister Moto with Ruben and Benny, who had a recording deal with Warner Brothers Records, and Los Traviesos, who toured Korea three separate times. According to Mike, Chad was worth a king’s ransom to a band. “He would always play in different bands. He was always the lead singer. Having a great voice and being a great drummer made him invaluable.”

In continuing the tradition, Chad’s son Pedro plays the drums and is a vocalist. He has also performed as a member of desert reggae powerhouse Soul Opus.

Ruben began playing the accordion and later switched to keyboards. Jorge never stopped playing the guitar and Benny Sr. kept up his bass playing abilities. Carlos has played mariachi music all his life. He plays guitar, guitarron and also the Bihuela, a five-string guitar. With regards to their children, Jorge has his son Jacob on guitar, Benny Sr. has Benny Jr. and Andrew on drums and Danny plays guitar and bass.

Mike’s first memories of music in the home are at 3 years old. He lived with his mother in a four bedroom apartment in Mecca Vineyards (now Summer Field Apartments) in the mid-70’s. He recollects drums, amplifiers, guitars, bass guitars, accordions and keyboards scattered around the apartment. “My brother Carlos played mariachi. He had credit at the long defunct Dean’s Music in Indio. He financed all the instruments and gear for everyone. At eight years old I was taught how to play drums by Benny (Sr.).” At ten years old Mike was asked by his stepfather Hilario if he wanted to play drums or guitar. Mike had recently listened to Rush’s Moving Pictures and rightfully chose the drums. His stepfather promptly purchased him a four piece Ludwig drum kit at Dean’s Music. Mike listened and played along to music from AC/DC to Billy Squier. He also gives credit where credit is due. “I learned by watching Chad play. I was and am still inspired by him. Chad was the forerunner.”

Mike started playing alto sax in 4th grade. He played marching quads and snare drum in the high school drum line. He was also involved in symphonic and concert bands. He and his high school drum line were one of the first groups to implement a full drum set into a show. He first met HOBP guitarist Arthur Seay at Westside Elementary School in Thermal when he was approximately ten years old

Benny Jr. was only three when he first picked up a set of drum sticks. He was introduced to the drums with a Junior Pro Tune series set that was yellow. “I remember taking it apart and not playing it very much. I wanted to learn how it worked. My parents were frustrated. Little did they know I was mastering the drums.” Benny Jr. has rightfully introduced his own child to the drums. “My son Austin is doing everything I used to do. He plays his set like a Cancino.”

Benny Jr. looks back on his musical upbringing and the impact his father and uncles made. “We lived in Indio behind Roosevelt Elementary. I would come home after school every day and Mister Moto would be in the garage rehearsing. I would come home every day and there would be two drums sets, Mike’s and Chad’s. What does a kid do? He puts his homework in the closet and stomps the drum sets.”

Benny Jr. currently performs with Kelly Derrickson and has played drums in the Kyle Turley Band. He has also plays in The Whizards, who had a hugely successful return at The Hood earlier this year. And let’s not forget the ambitiously peculiar band InVitro, which included Mike Pygmie and Mikey Doling. “I always knew I had to do something. The drums did something for me. Early in 2003, I stopped messing around with little sets. Mike Pygmie called me to see if I wanted to check out his band The Whizards. When I started jamming with them it was definitely an introduction to musicians that made the music matter. I played with them for two years.”

Music is both nature and nurture for the Cancino family. There are obvious examples to follow and there is also a heredity factor. Benny Jr. identifies the propensities. “When they say it’s in the blood it’s no joke. My father remarried and had three children. They live in Oklahoma and they love to sing and dance. Music is innate for us, it doesn’t go away. I feel empathetic for people who don’t have an outlet. If I go too long without any musical experimentation there’s something missing. I find balance in music.”

Andrew is Benny Jr.’s younger paternal half-brother. Although Andrew began utilizing music later in the game, he has demonstrated that the proverbial apple does not fall far from the tree. “I didn’t grow up with that side of the family. My lineage gave me an advantage and having the genetic predisposition to music.” Andrew is fluent in guitar, bass and drums. I asked him, Why drums? His answer: “Fun!” Benny Jr. and Andrew have established a bond despite their prior estrangement. Benny speaks proudly of Andrew’s musicianship. “Andrew is a talented individual. He was playing guitar in a rock band for church. He was only 20 years old. I have seen Andrew perform several times and he crushes it”. Andrew displays veracity and bashes his drums with utter precision. He currently works full-time as an insurance agent and attends college part-time pursuing his Bachelor of Arts in economics. “I keep rudiments up by using my practice pad. I play when I go to my Uncle Mike’s house. It will never leave me. Once you get bit you are stuck with the virus.”

The Cancinos are part of my family. I have known them since I was about 5 years old and as with any family there is strife…struggle…peace…understanding…and patience. This family has developed a purpose. That purpose is to bring other families closer together through the music they create. It’s a wonderful thing when we can stop and acknowledge a heritage as rich as the Cancino’s. From my family to yours, congratulations, thank you and we love you!