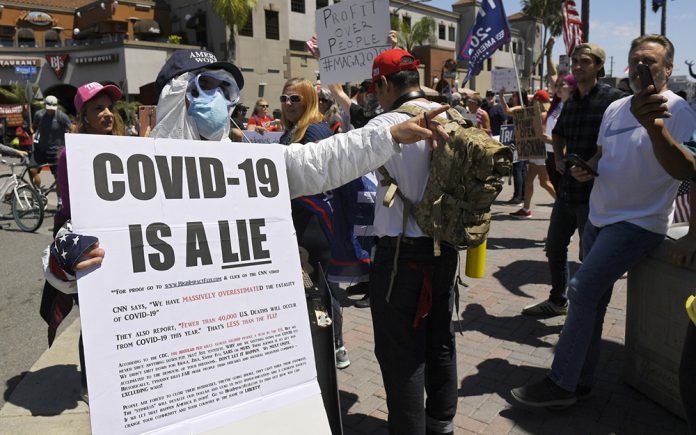 Winston Churchill once said that Americans would always do the right thing after everything else has been tried.  If the pandemic has proven anything, it is that Winston Churchill words of 75 years ago are truer today than during World War II.

Surveys suggest that as many as one in four people doubt the severity of the impact of COVID-19 on health and society as shared with us by health experts and public officials.  Younger adults and the healthy were the more likely to doubt the warnings of dire health consequences.

Social media postings have belittled the dangers of COVID-19.  ‘If you must be tested to know that you have the disease, it must not be something to worry about, right?’  Many question ‘convenient’ inconsistencies like allowing people to fly or keeping Walmart open while the mall is closed.  Others have mentioned the pandemic as Nature’s way of thinning the herd.

While ignorance or selfishness is alarming in its prevalence, the more concerning folks are those using the pandemic to advance political agendas.  People on the left and right, Democrats and Republicans alike have injected politics into a time when the nation should unite in a war against a virus that is effective at killing at-risk groups like seniors, those with diabetes or a compromised immune system.

Because people are too selfish or stupid, the economy is being shut down for a second time.  Hard working folks who were willing to take their risks with the disease over the economic consequences are having that option taken from them.  With cases rising and hospitals at capacity, governors of Republican and Democratic controlled states both had to restart business shutdowns.  More people will die from untreated diseases because of fear or hospital overcrowding.

The economic and mental consequences are going to be severe and felt for a long time to come by a large percentage of Americans.  Because some people could not follow the advice of health experts, more businesses will fail, more people will be out of work and economic times for large segments of our population will be forever ruined.  All because people were too selfish or stupid and could not look out for the greater good of all.

While there is a small minority who believe this is an international conspiracy to keep President Trump from a second term, most psychiatrists consider these people to be amongst those in need of assistance.

While you and I may consider the use of a mask and social distancing to be a courtesy to others, there is a sizable group who think this is some effort by the government to take away our civil rights.  These undoubtedly patriotic folks should focus on more important rights that have been taken from us.  Things like mandatory seatbelts, child restraints in cars, the bankruptcy code without debtor’s prison and the use of metadata from your phone and internet by business and government alike.  The use of a mask to get the economic going again and protect those at risk just doesn’t sound like an issue worth fighting for when hospitals are overwhelmed.

How Did South Korea Beat the Virus?

The economies of the world that are doing the best have one trait in common – they were united in their approach to eradicating the disease.  In South Korea, the public was united in the wearing of facemasks and gloves, social distancing and mandatory quarantines of the infected.  When someone was found to be infected, they were housed in business centers until the disease passed or they required medical assistance.  After past respiratory outbreaks, the South Koreans as well as the Taiwanese and Vietnamese were exceptionally well prepared and united in doing what was best for all.

In 1941, Winston Churchill spoke the infamous words that speak to the United States in 2020: “United we stand, divided we fall.”

Wear a mask and be hygienic to save lives, jobs and the economy.