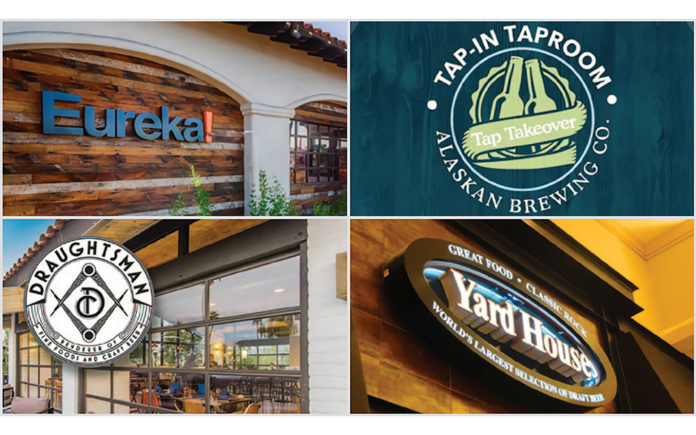 After last week’s article on the Coachella Valley’s new beer scene was published, friend and fellow beer writer Andrew Smith informed me that the valley has even more beer being produced in 2019. Las Palmas is a small 2-barrel brewery and lounge that’s set to open in August if all goes to plan. Boucher Cafe and Deli serve up “European style gourmet cuisine” and even brews its own beer under the St. Arnulf’s brand. With 7 breweries possibly cohabiting in the California desert, there are now more choices than ever for craft beer lovers.

Supplementing breweries in any scene are the additions of beer bars and beer bodegas, here are some of the best the Coachella Valley has to offer.

Eureka: More so than any other casual dining chain restaurant in the valley, Eureka always has a consistently great craft beer selection on tap. With a Nice selection of seasonal offerings and rotating taps, Eureka’s happy hour will not leave you disappointed. Although they tend to favor California breweries, this isn’t a bad thing, as you’re always going to find fresh kegs of bright and lively IPAs.  For the longest time they ran a special for $4 pints of anchor steam, and I was there weekly to take advantage of it.

Tap-In Taproom: Located inside of the Palm Desert Whole Foods, the Tap-In Taproom has a small but nicely varied selection of draft choices. Usually heavy on the more ubiquitous So Cal brands like Ballast point, Stone, and Belching Beaver, there’s still something for every mood, and they don’t shy away from adding stouts and porters to their lineup. Modern Times Black House, and Belching Beaver on nitro were two of several dark ales to choose from when I visited this location last week.

Draughtsman: Beer bars seem to get harder to find outside of the Rancho Mirage and Palm Desert areas, but Draughtsman has Palm Springs beer lovers covered. As the name would suggest, this place is all about draft beer, and offers great prices during their happy hour.

Yard House: This chain is popular amongst casual beer lovers for a reason; their extensive selection of taps that simply can’t be rivaled by any other establishment out here. With a wide variety of imports and domestics, macro and craft, there is literally something for everyone’s beer palate here. I find myself at the Yard House very infrequently, mostly because it’s usually so busy and loud with multiple sports games going on at once. But I’ve never once looked at their tap selection and thought, “welp, there just isn’t anything here I’m in the mood for.” Yard House always has something you’re in the mood for.

Total Wine and More: With an equal emphasis on craft beer, wine, and spirits, this place makes me feel like a kid in a toy store every time I visit. An addled, bloated, mildly-alcoholic kid in a toy store. Known to carry even coveted bottles like Pliny the Elder from time to time, their craft beer isles have been classified by style and import, with California beers having their very own section. The staff is filled with knowledgeable and passionate lovers of beer and wine, and I kind of wouldn’t mind volunteering there just to be close to all that sweet, sweet fire water.

Whole Foods: Although they may have downsized their craft beer selections in recent months, Whole Foods still carries a carefully chosen selection of imported and domestic craft beers. There are bottles of Belgian ales there that I haven’t seen anywhere else, and the fact that they keep all their product refrigerated does me a proud. No dusty old bottles sitting on shelves forever at Whole Foods, they keep their stock rotated.

BevMo: While I do find their selection to be smaller and less varied than Total Wine, BevMo has a solid enough offering of popular craft beer to keep east-end valley residents satisfied. Aside from the usual stock that can now be found in most grocery stores, BevMo has a nice variety of imports that makes them the go-to when shopping for new beers to try.