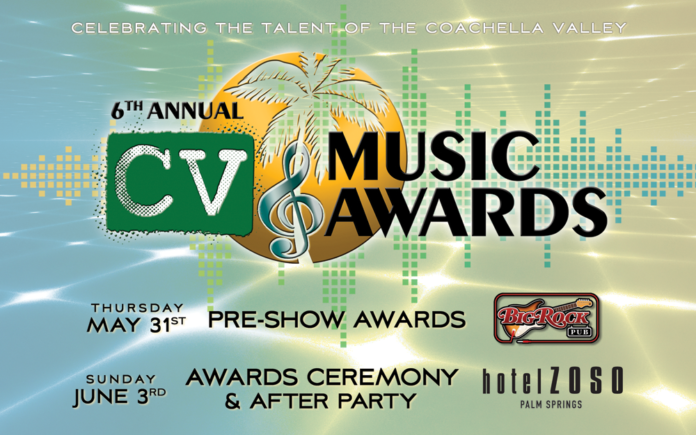 STILL TIME TO GET YOUR TICKETS

The CV Music Awards have continued to grow over the last 6 years warranting a Pre Awards Show to be added last year. We started with just a few categories six years ago and kept growing: in 2015 we had 28 categories in 2016 we had 32, last year we had 37 and now this year we have increased to 41.

Our gracious sponsor, Big Rock Pub, will be hosting the Pre-Party Awards Ceremony on Thursday, May 31 from 6-10pm, where we will announce winners in 16 of the 41 nominated categories.

There will also be a very special VIP after party for the main awards at Hotel Zoso from 9:15 to midnight, which will feature Long Duk Dong, Sleazy Cortez and DJ Guy Worden.

For those who have attended this in the past you know it’s an event not to be missed. So get your tickets now as the VIP party will have limited tickets this year. VIP tickets are $25.00 in advance and $35.00 at the door (if there are tickets still available).

For tickets to all 3 events go to www.coachellavalleyweekly.com and click on the ticket link.

2018 CVMAs Band and Awards Line Up

5:00 – Welcome everybody to the 6th Annual CV Music Awards

5:25 – Announce Awards that were already given out on May 31 at Big Rock

In the Name of the Dead performs

The After Lashes perform

6:50 – Introduce TK from 93.7 KCLB and Morgan James as hosts of second half of awards

7:15 – Present the Trailblazer Award to The Whizards (Presented by Jason Hall)

8:15 – “In Memory” to honor the local musicians we lost this past year: Alex Antonio Perez, Scotty Stone and Phil Franklin

8:40 – Pioneer Award to The Cancino Family

VIP after party to follow at 9:15 with DJ Guy Worden, Long Duk Dong and Sleazy Cortez