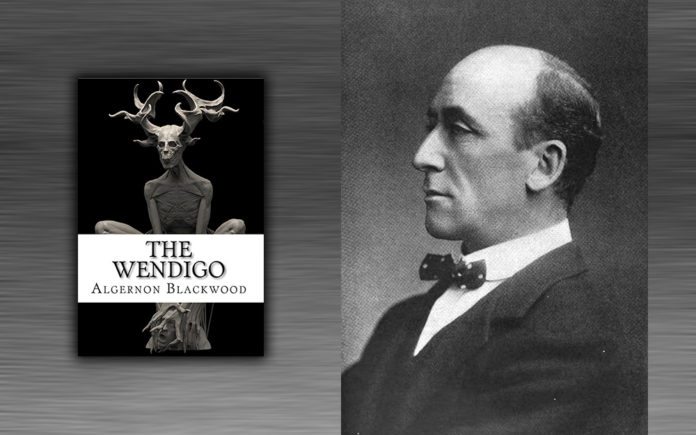 —–
The Wendigo
by Algernon Blackwood – Fiction
—–

Nature can be terrifying.  Fires, hurricanes, and earthquakes have a way of making human beings feel small and vulnerable.  Our gigantic oceans are filled with man-eating monsters.  The forests are a vast territory with great beasts.  In Algernon Blackwood’s The Wendigo (Anodos Books, 49 pages), man faces nature and the unknown.

The story takes place in the immense Canadian forests of Northwestern Ontario. Dr. Cathcart and his young nephew, Simpson, a divinity student, are on a hunting expedition for moose.  Traveling with the men are their guides Hank Davis and Joseph Défago.  A Native American named Punk, serves as the hunting party’s cook.

After a week in the backwoods, the men have no luck finding a single moose.  Strangely, they haven’t even seen a shred of evidence that moose are present in the woods.  So, the men decide to break up the party and go their separate ways in search of the elusive animal.  It is late October, and already there is snow on the ground.

Young Simpson and Défago go east canoeing over the Fifty Island Water.  It’s a tough trip, and Simpson feels tiny and alone in the quiet wilderness. Défago is superstitious and prone to melancholy, but won’t let fear get in the way of his job.

Back on shore, the men pitch a tent and start a fire.  That night, a strange odor fills the air and Défago share the legend of the Wendigo – an ancient monster bigger than any other creature in the forest.

When Simpson wakes the next morning, Défago is missing.  Only a strange scent lingers.  A smell that is both foul and sweet.  Young Simpson sets out to find his companion only to discover inexplicable deep tracks in the snow like nothing he has seen before.  A creature so big the stride is eighteen feet, and it appears he or it is carrying prey – Défago?

The Wendigo was first published in 1910.  Author Blackwood takes the reader deep into the forest where time stands still and the unknown prevails.  He wrote this short story during North America’s era of adventure and exploration.  The dark, the cold, the sounds and smells of the deep woods were so frightening, it could kill a man.

What makes this story so terrifying is Défago’s mysterious return to camp.  The other guide quickly recognizes it is not actually Défago but maybe a devil inside him.  Of course, Dr. Cathcart, a man of science disagrees.  Défago is only traumatized.  But shortly, everyone wonders whether it is Défago or the Wendigo.  Simpson cannot be sure and fears telling his uncle the terrifying truth of what actually happened in the backwoods.

This is a psychological thriller.  The Wendigo is a fantastical roaming beast whose prey is the human mind.  He is fucking with these hunters like Bigfoot never could.

I love the idea of a super predator who patrols the wilderness assuring the forests continue to thrive.  These spirits and legends keep the mystery and mystique of the deep, dark woods very much alive.

It’s important that human beings are reminded we are frail, not the top of the food chain, and nature rules.  Perhaps that’s why there are those in power who are hell-bent to deny climate change.  It’s the only way they can dominate nature – by destroying it.  They had better watch out, the Wendigo might be headed their way.

Have a happy Halloween!