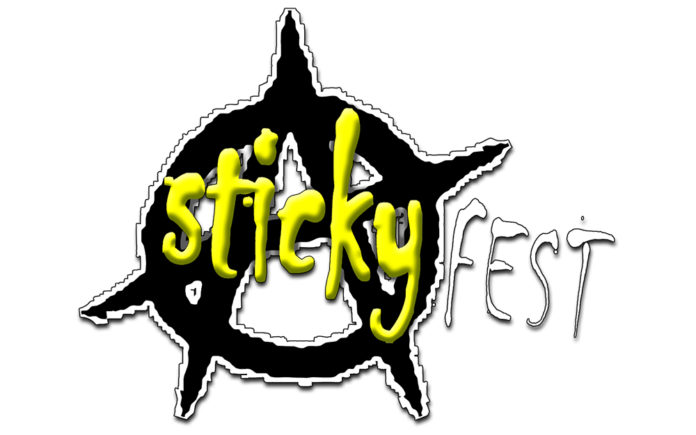 The first annual Stickyfest presented by Greg Gendron and Sticky Doll has come and gone. It’s safe to say it was a success, especially when you think about it being a DIY punk and metal fest. The line-up was stacked and the location and crowd were perfect.

Early in the day, pre doors, there were a few hiccups which were promptly addressed and resolved by the time 29 Palms band Dirt Boys hit the stage at 2pm. Dirt Boys were a perfect opener for the fest. They were very inviting. They let everybody in attendance know they were there to have fun and invited everyone to join them.

Next came the youth band, UU. These kids have talent. They just lost their bassist/singer 2 weeks prior and found perfect replacements. They launched into a set of what I would assume is classic rock to them, but music that the majority of attendees grew up on. They covered Nirvana, Rage Against The Machine, Marilyn Manson, and Radiohead, just to name a few and did it with ease.

The Wastedeads were next. They are a couple of zombie punk rockers who got the energy flowing in a bit of a different direction. They started the rowdy, high energy segment of Stickyfest. Ormus helped build that high intensity momentum. The sun was going down, and they proved it was time for the next level.

It was a few hours into the fest when Instigator started that the beer truly began to take effect. Instigator is a young band that seems to be heavily influenced by 80’s LA thrash. These guys were a highlight to me and obviously to most that were there. The crowd was moshing and falling all over the place and Instigator gave them the proper music to let their energy out. Puke (Throw the Goat) and I jokingly argued about me trying to steal them from his label Regurgitation Records. He scored when he signed this band.

The last few bands of the night solidified the awesomeness of Stickyfest. Throw the Goat came out and did their usual face melting set of high energy music. These guys are on their way up on a national level and it shows in how tight and polished their performance was.

Mega Sun is another top notch new band who is on a steady rise. Mega Sun and Instigator are easily my favorite newer bands in the desert. Mega Sun is a powerhouse trio who deliver every time. Look for them to be an integral part of the scene.

Defacto house band and namesake to Stickyfest, Sticky Doll, are creating sounds out of a three piece you would only expect out of a 5 piece. These guys and gal put on a true show. Makeup and all! The sound Greg gets out of his bass sounds like 2 guitars and a bass. It’s incredible. Their energy is phenomenal.

Sleazy Cortez closed the night. Typically, you would want somebody to bring the crowd down at the end of the night. Stickyfest was anything but typical. Sleazy Cortez destroyed the stage and made sure everyone who was camping would be up a long time. I hope this was the first of many Stickyfests to come!