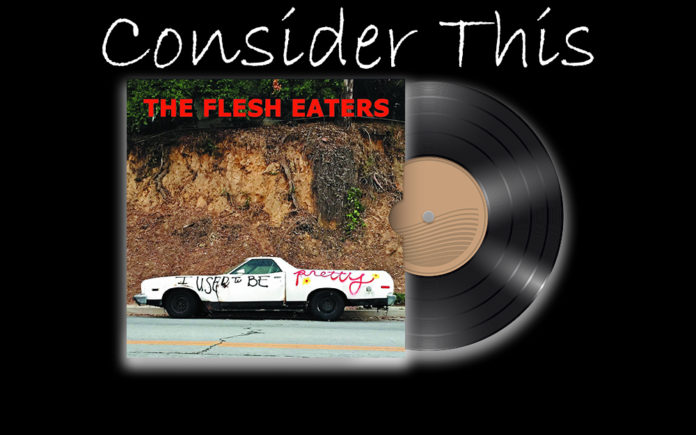 “I’m so sick of all you angry people, killing each other for the sake of your god, You just can’t seem to understand, your enemy is a god-made man/So get off your goddamn cross, and let go your fetish of loss, you better get busy being grateful for every precious breath you take.” That’s Chris D. unspooling a bit of righteous indignation on the song “Miss Muerte.”

Chris Desjardins has excelled at so many careers, it might be simpler to list what he hasn’t done. He has been a writer, a music journalist a film critic/historian, a record producer, a poet and an actor, but he is probably best known as a musician.

Chris grew up in Riverside and following college, he relocated to Los Angeles in the mid ‘70s. An aspiring filmmaker, he was making ends meet as a high school English teacher. While attending a poetry workshop in Venice, he met John Doe and Exene Cervenka. Concurrently, the Los Angeles Punk scene was taking shape as John and Exene formed the band X, with guitarist Billy Zoom and drummer, D.J. Bonebrake.

As X was getting off the ground, Chris began contributing to Slash, a Punk fanzine that spotlighted the primitive sounds that spilled out of unconventional clubs like the Masque and Madame Wong’s. By 1978, Slash released a 7” single from the Germs. Suddenly, they became a full-fledged label, issuing the Germs’ first long-player a year later and X’s seminal debut, Los Angeles, in 1980. By this time, Chris began performing around town as Chris D., fronting the first incarnation of his band The Flesh Eaters.  The band recorded a single and a follow-up record, released through his own Upsetter label.

Not long after, Slash tapped him to be their de facto A&R guy. Rather quickly, he also became a sought-after producer, making iconic records with bands like The Dream Syndicate, Green On Red and The Gun Club. In 1981 he assembled the most acclaimed line-up of The Flesh Eaters, recruiting Dave Alvin (guitar) and Bill Bateman (drums) and Steve Berlin (saxophone) from the Blasters plus John Doe (bass) and DJ Bonebrake (percussion) from X.

Their album, A Minute To Pray, A Second To Die incorporated a plethora of styles, from Punk to Stax/Volt to Blues, Country and Rockabilly, still they managed to sound like nothing else in L.A. It was lightning in a bottle, they played a few incendiary shows before each musician returned to their day jobs in their own bands. Chris led other versions of the band recording an additional four albums between 1982 and 1991.

In 1983 he began a new band, Divine Horsemen with then-wife, Julie Christensen. Their sound is best described as literary Roots Rock, they were active from 1984 to 1987, releasing four records. In between musical activity, Chris carved out an interesting acting career, starring in Alison Anders’ debut film, “Border Radio,” as well as playing integral parts in the Kevin Costner thriller, “No Way Out,” and the original “Lethal Weapon.” In the mid ‘90s he released a solo album.

For the last several years, music has been sidelined, as Chris pursued more literary and cinematic paths. He’s written poetry, along with several novels. He published “Gun And Sword,” an exhaustive encyclopedia on Japanese gangster cinema, and directed his first feature film, “I Pass For Human” in 2004.

A year later fellow Punk compatriots Mudhoney were curating the All Tomorrow’s Parties music festival and managed to corral The Flesh Eaters’ storied ’81 line-up to participate. It went well enough to foster talks of a real tour. At this point, Dave Alvin had become a critically acclaimed solo artist, John Doe toggled between a solo career, playing with DJ Bonebrake in the reconstituted X and acting in films. Bill Bateman continued to pound a kit for The Blasters and Steve Berlin had been Los Lobos’ sax man since 1984. Coordinating a Flesh Eaters tour between commitments proved Impossible.

But then in early 2018, the impossible became possible, Dave, John, D.J., Bill and Steve became available and the band booked their first honest-to-goodness tour. The energy onstage was so electric, Chris suggested they collaborate on a new album. They hit the studio in April and the result is a scorching, 11-song set epigrammatically entitled I Used To Be Pretty.

The record gets off to a suitably sinister start with “Black Temptation,” A joint effort between Chris and Dave. It unfurls slowly with foreboding percussion and mournful sax cloaking the track in a Film Noir patina. Chris doesn’t so much sing as growl out a time worn tale of unrequited love and romantic confusion. The band barrels in full-bore on the chorus, along with Julie Christensen (who adds her sultry talents to four other songs). Dave’s guitar see-saws over ricochet bass lines and a tick-tock rhythm. Steve’s saxophone provides a sympathetic Greek chorus to labyrinthine lyrics like “Knockdown drag-out animal machine, I need to separate myself from the dream, stop surrendering up minutes in a whirlpool of false confidence/Death smell under the scent of roses, a stampede of fear-maddened horses dream of the sun in eternal light after all the time we’ve had.” The instrumental break feels cavernous yet compact.

Chris has cherry-picked six songs from the Flesh Eaters’ oeuvre that felt ripe for reinterpretation. The oldest, “Pony Dress,” dates back to 1979. Whiplash guitar riffs ride roughshod over searing sax notes, corrosive bass lines and a hell-for-leather backbeat. Chris’ frenzied method of seduction leaves a little to be desired; “Stick a mirror between the bars, see what’s happening to me, you and your pony express, looking up into my face/There’s a nasty little tear before the sheets hit the floor, a sticky gleam of sweat like the firemen get, I’m going to trip my holster, draw the bell spur, blur with the ringing in the pony dress.” Predictably, it’s over in a little more than two minutes.

Both “My Life To Live” and “The Wedding Dice” were written in 1982. On the former, throbbing bass gives way to blitzkrieg guitar, stentorian sax, a driving rhythm and propulsive percussion. The anthemic melody is surprisingly catchy even with Chris’ strangulated vocal delivery and cryptic declarations; “We can’t live without talking, sometimes pleasure’s no fun/When friendly conversation puts you under the branding iron!” The band’s muscular attack offers a welcome distraction.

The latter opens with blowzy sax before the band roars in, accelerating the staccato tempo. Love, lust, matrimony and murder is sketched out in an economic fashion; “They buried her embraces in a white coffin, gave me two bits of lead, a jealous father’s souvenir/That’s when I took a gun into the liquor store, the cops to this day say ‘it’s no heartwarming story’.” As the calibrated cacophony reaches a fever pitch, the saxophone wails, over raspy guitar and a pounding beat, and then, just as suddenly, it stops on a dime.

A martial cadence and shards of squally guitar anchor “The Youngest Profession,” which dates back to 1991. Swampy and sepulchral, lyrics only hint at the title’s seedy vocation, but every time Chris utters the simple command “get crazy” the band obliges, synchronizing into an explosive Free Jazz freek-out. The arrangement and instrumentation bear passing resemblance to the tripwire Psychedelia of “When The Music’s Over” by The Doors.

Meanwhile, the syncopated swing of 1999’s “House Amid The Thickets” features strafing power chords over a chunky backbeat, rippling percussion, bramble-thick bass lines and sinewy sax. Chris rants and raves about a fiery femme fatale; “Then she starts going back to bars, before you know it she wrecks all her cars/How does she stay so beautiful, why am I such a goddamn fool?” His fervid prose recalls the telegrammatic style of authors like Jim Thompson and James Ellroy. Dave’s scorching solo doubles down on the angst.

The Flesh Eaters salt three telling covers into the mix. First up is a menacing take of Fleetwood Mac’s “Green Manalishi.” A tribal tattoo connects with rev’d up guitars as a serpentine sax slithers behind each verse. The lyrics split the difference between hallucinatory fever dream and cogent commentary on the root of all evil: money. Marimba and saxophone intertwine on the break, sending the song down the rabbit hole.

The band acquits themselves mightily on the Sonics’ Garage Rock classic, “Cinderella.” Although they increase the beat slightly, the song is a sweat-soaked workout accentuated by incendiary guitar and shadowy saxophone. They also offer up a ferocious rendition of the Gun Club’s “She’s Like Heroin To Me.” Locomotive rhythms collide with sandblasted guitar, caffeinated percussion, roiling bass and honking baritone saxophone. Chris’ vocal gymnastics completely convey the power of carnal addiction.

The album closes with another new number. “Ghost Cave Lament” was inspired by the Flamenco classic “Moritas Moras.” The guitar is lithe and lethal and the swirly sax notes, rumbling bass, click-clack percussion and rock-steady beat provide ballast for Chris’ shamanistic fervor. Clocking in at more than 13 minutes, this track doesn’t fuck around.

Although the term Punk Rock Super Group seems like an oxymoron, that’s exactly what The Flesh Eaters are. Coincidently, I Used To Be Pretty will be released just ahead of the Super Blood Wolf Moon eclipse. That feels wildly apropos. Perhaps this will pave the way for more albums to come. As Chris succinctly states in the song “My Life To Live,” Honey, masterpieces can be coaxed. (The Flesh Eaters will play a sold-out show with special guests Mudhoney at Pappy & Harriet’s Pioneertown Palace on Friday January 18th).