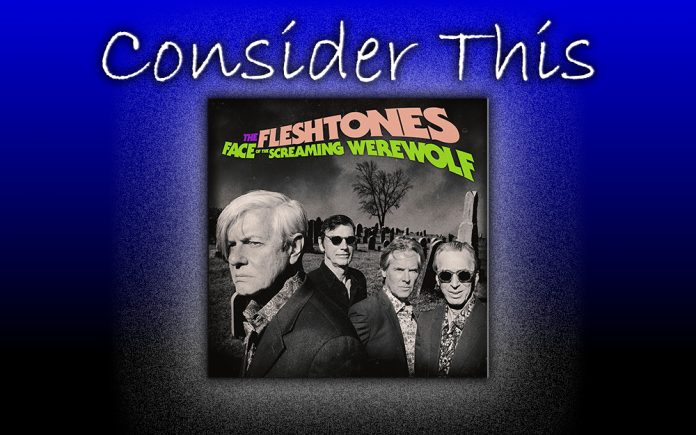 That’s the Fleshtones, quoting one of the 20th century’s biggest literary lions, F. Scott Fitzgerald. But “The Great Gatsby” author was alluding to America’s capricious nature, not the venerable Queens quartet. Fact is, the band has been enjoying a resurgence since the dawn of the 21st century.

A quintessential New York band, their story began in 1976 when roommates Keith Streng and Jan Marek Pakulski discovered the previous tenants had left behind some musical equipment. Keith strapped on a guitar and Jan picked up the bass. Pretty quickly, neighborhood pals Peter Zaremba and Lenny Caulderon joined in on vocals, harmonica, keys and drums, respectively.

Soon enough the four-piece was sharing stages with up-and-coming Punk progenitors like the Ramones, Blondie, Television and Talking Heads. All of these bands made their bones playing scuzzy dives (ahem, soon-to-be legendary venues) like CBGB’s and Max’s Kansas City. Later they cultivated a passionate fan base performing at Club 57, Danceteria, Irving Plaza in NYC and supportive clubs like Maxwell’s in Hoboken and the original 9:30 Club in Washington, D.C.

Although their contemporaries were using the Punk Rock paradigm to mine slightly more commercial sounds, The Fleshtones’ sound was a scabrous mash-up of Garage, Surf-Rock, early ‘60s Psych with a hint of R&B. For a while, they even added a horn section, The Action Combo, to their live shows. They dubbed their style Super Rock. The band hooked up with the indie label Red Star Records and recorded their debut, Blast Off. Unfortunately, Red Star was experiencing financial problems and the album remained unreleased. The band nearly called it quits, in fact, Lenny left and Bill Milhizer stepped behind the drum kit.

Their luck began to change at the start of the new decade when they signed with I.R.S. Records. The indie(ish) label was distributed by A&M Records and helmed by Police manager Miles Copeland. The label would soon achieve massive success with The Go-Go’s and throughout the ‘80s, they would break new artists like The English Beat, Wall Of Voodoo, Oingo Boingo, R.E.M. and Concrete Blonde.

An appearance in the British Punk/New Wave concert film, URGH! A Music War alongside O.M.D., Wall Of Voodoo, X, English Beat, Surf Punks, The Police, XTC (to name a few) raised their profile. Their inaugural I.R.S. release, was an EP, Up Front, followed by four long-players, 1981’s Roman Gods, 1983’s Hexbreaker! along with Speed Connection, and Speed Connection II-The Final Chapter. Both these efforts found the band in their element in a live setting.

The Roman Gods album included their breakthrough hit, “American Beat,” which the band performed on Dick Clark’s “American Bandstand.” Later the song gained a wider audience when it was included to the soundtrack of Tom Hanks’ raucous and raunchy 1984 movie, “Bachelor Party.”

That same year, Peter was tapped to host “I.R.S.’s Cutting Edge,” which aired the last Sunday of the month, on MTV. The program gave plenty of exposure to under-the-radar artists like Minutemen, Red Hot Chili Peppers and Klark Kent. In late 1986 Jan left the band, before a permanent replacement was found, both Fred Smith (Television) and Andy Shernoff (The Dictators) took turns holding down the low end . By the end of the decade, Ken Fox was recruited for bass duties.

Throughout the ‘90s, The Fleshtones hopscotched from indie labels like Emergo, Ichiban, Telstar, Epitaph Red Star and Wagram. Despite the tsuris, they continued to crank out consistently entertaining albums like Fleshtones Vs. Reality, Soul Madrid, Powerstance, Beautiful Light, More Than Skin Deep, and of course, Hitsburg, Hitsburg Revisited and Return To Hitsburg. Through it all, they managed to maintain their loyal and exuberant fanbase.

Along the way, they circled the globe, winning over passionate followers in Spain, Italy, Scandinavia and France. Back in NYC, they were on hand for the creation of “Wigstock!” and they were last band to play at The World Trade Center’s Windows Of The World, before the terror of 9/11 dimmed those lights forever. They also managed to influence a plethora of bands, including the Hoodoo Gurus, The BellRays and The White Stripes.

By 2003, they finally found a simpatico home at the Yep Roc label. In the ensuing years they have released a clutch of superlative albums like Do You Swing, Beachhead, Take A Good Look, the yuletide themed Stocking Stuffer, Brooklyn Sound Solution, Wheel Of Talent and The Band Drinks For Free. 2007 saw the publication of Sweat: The Story Of The Fleshtones, America’s Garage Band. Two years later, a feature-length documentary, Pardon Us For Living, But The Graveyard’s Full, was released.

Now, the band has released their 22nd(!) album, Face Of The Werewolf. Initially available on vinyl for the 2020 Black Friday edition of Record Store Day, it is now available on myriad formats.

The opening track hurtles out of the speakers at warp speed. Twangy, reverb-drenched guitars collide with spooky harmonica, growly bass lines and ooky Farfisa over a rampaging backbeat. Fright-fest lyrics depict a nocturnal snog-session on a moonlit night. Things quickly get out of hand, becoming positively Lycanthropic; “The light was low, the time was right, I saw the full moon glowing in the night, if I’m going to make my move this is it, when she turned to me to kiss her lips, it was the face of the screaming werewolf, fill my heart with terror and fright.” Yowly vocals are matched by fuzz-crusted guitars that blur on the instrumental break.

The locomotive rush continues on “Spilling Blood,” which recalls a Who concert that turns deadly. Rippling keys wrap around loose-limbed bass, crunchy guitars and a walloping backbeat. The opening verse sets the scene; “The sixties were over, malaise swept the nation, I was looking for fun, but got alienation my boss Ron said ‘we got work to do, we’re going to Forrest Hills because I booked the Who.’” Tensile and urgent, windmilling riffs underscore this sharp realization; “Love was out of reach as the stage was tall, I realized I didn’t like Arena Rock at all/And high on the stage like they didn’t know a thing, The Who went through the motions to play and sing.”

Meanwhile, “The Show Is Over” is a manic hoedown, powered by a pounding, triple-time tattoo, clattery handclaps, boomerang bass and scattershot guitar licks. A broken romance is compared to a two-car collision, a fatal hit and run; “Was it you that I saw there, staring at the mangled body of what we used to share, did you ever care, or did I see you smile?” Rather than wallow or pout, Peter insists it’s time to “move along, move along, move along, move along now.” The calibrated chaos of the instrumentation culminates in a frenetic harmonica freakout.

Just ahead of the album’s official release, …Werewolf’s first two singles went into heavy rotation on the Sirius radio channel, Little Steven’s Underground Garage. “You Gotta love, Love” stacks scuzz-tastic guitars and barbed bass atop a stompy beat. The lyrics attempt to summon the spirit of the Summer Of Love; “Can you believe in a power called love? Love power, even the hippie kind?” But Peter can’t completely marshal the requisite enthusiasm for that sort of dippy Flower Power. As guttural guitars search and destroy on the break, it’s clear that you can take the boys out of NYC, but you can’t take NYC out of the boys.

Menacing bass runs, gritty guitars and a crashing backbeat propel “Violet Crumble, Cherry Ripe.” No chasing the dragon for these guys, their addictions are limited to Australian candy confections; “Wrappers scattered all over my bed, I’m not myself, so you’ve been warned, I’ve been transformed.” Squally guitars and a jittery rhythm underscore the Jekyll and Hyde metamorphosis that occurs following one too many treacly treats.

The best songs here find The Fleshtones deep in their comfort zone on one cut and expanding their horizons on the other. “Manpower Debut” is a Shagadelic groover replete with shang-a-lang guitars, under-slung bass, squishy, Bazooka Joe bubblegum keys and a rattle-trap rhythm. Darting harmonica fills punctuate each tongue and cheek verse. Lyrics filter testosterone-fueled angst through a cartoony lens; “You don’t need some little boy, I’m no Little Lord Fauntleroy, I got the itch, so flippa my switch/Hey man can you share a bit of your manpower debut, I’m reading Shelley, Byron and Keats, manpower for you, gimme extra cheese on my slice of pizza, Oh, I got toxic masculinity.” Shards of staccato guitar unspool on the break, duckwalking with Chuck Berry-fied economy.

Conversely, “Alex Trebek” executes a stylistic 180. A surprisingly sweet encomium to the (gone too soon) late “Jeopardy!” legend and all-around mensch. Jangly guitars brush up against wily bass shimmery Farfisa notes and a cantilevered beat. Presenting general knowledge clues like “Thirty Four years on TV, born in Sudbury, Ontario, he got our friend Fran Fried on the show, who made history on Jeopardy,” in the form of answers, the response, “Who is Alex? Who is Alex,” must be phrased in the form of questions. It’s pretty irresistible.

Two tracks time-travel to more evocative eras. The spectre of Spector and Springsteen haunt “Waiting On A Girl,” from the Wall Of Sound production, to the Doo-Wop flavored vocals and the swoony violin. Bassist Ken Fox’s vocals are out in front and he channels some operatic E. Street imagery with lyrics like “My friends all tell me I’m crazy, I’ll raise a glass cheers to you all, but my place is right here on Lonely Street, waiting for my true love to call.”

The band tackle a deeeep cut from the Rolling Stones’ late ‘60s canon. “Child Of The Moon” was originally found on the flipside of the band’s “Jumpin’ Jack Flash” single, a bit of throwaway, that has gained stature over the years. The Fleshtones hew pretty closely to the Stones’ blueprint, but manage to make it their own by slightly accelerating the tempo, jettisoning the Psychedelic drone, and inserting slashing power chords, smoky harmonica, buzzy bass, space-age keys. Few can touch Mick Jagger’s sybaritic sneer, but Peter Zaremba comes close.

A couple of instrumentals dot the record. “Swinging Planet X” is a sure-footed stomp that builds off a primordial Bo Diddley beat, Hang 10 Surf guitar, Bluesy harmonica, and prickly bass lines. Next time you create an instrumental mixtape (or curate a Spotify -whatever the fuck- playlist) this one will sandwich nicely between the Surfaris’ “Wipe Out” and the Stones’ “2120 South Michigan Avenue.”

The album closes with the other instrumental, “Somerset Morning.” Here, hazy harmonica notes wash over rumbling bass lines, Spaghetti Western guitars, whirly keys, a hint of finger-poppin’ cool and a hop-a-long beat. It’s a sweet and shambolic end to another great Fleshtones effort.

Some 45 years in, The Fleshtones continue evince the same elastic urgency, crackling caustic wit and frenetic fun they displayed onstage at CBGB’s. Their Super Rock sound may not hit the top of the charts, but really, who gives a shit? Face Of The Screaming Werewolf is a rollicking rave-up from start to finish.