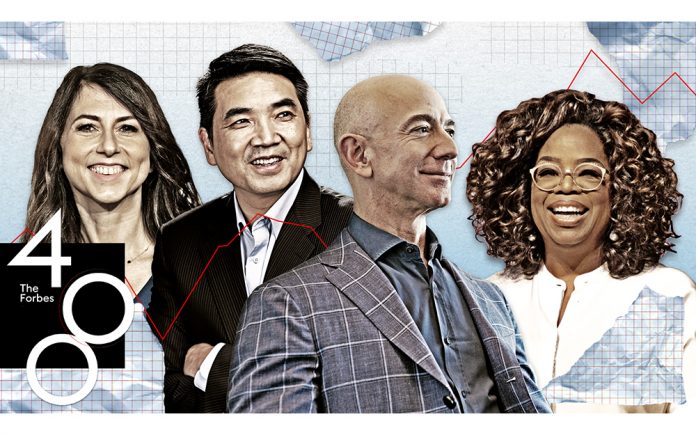 Fortune Magazine recently released their list of the 400 wealthiest Americans for 2020.

These 400 people are collectively worth $3.2 trillion, up one-quarter trillion from last year.  To put this level of wealth into perspective, it equates to nearly $10,000 per American or $10 million for every full-time resident of the Coachella Valley.

Despite the most expensive divorce of all-time, Jeff Bezos (56) remained the wealthiest America worth $179 billion. His ex-wife, MacKenzie Scott (50) became the 13th wealthiest person and second wealthiest woman.  Alice Walton (70), is the richest woman and 10th wealthiest person at $62 billion thanks to an inheritance from her father, Wal-Mart founder, Sam Walton.

Bill Gates (64), the retired co-founder of Microsoft is the second wealthiest American at $111 billion.  Gates’ long-time friend and founder of Berkshire Hathaway, Warren Buffett (90), is fourth on the list at $74 billion.

California serves as the home residence to half of ten wealthiest Americans.  If we include Los Angeles Clippers owner and retired Microsoft CEO, Steve Ballmer (64) who is sixth on the list at $69 billion and spends a lot of time with his basketball team, the state serves as home to the majority of the top ten. That said, there is a good chance that the enigmatic founder of Tesla, Elon Musk (49) who is sixth on the list may relocate from Bel-Air to Austin soon.  By relocating along with new Tesla facilities near Austin, Musk will save billions in state taxes related to Tesla stock options coming his way soon.

The wealthiest person in the Media and Entertainment field is a person who could be listed in the financial services field as well – Michael Bloomberg (78).  Coming in 14th, Bloomberg is estimated to be worth $55 billion.  The Rupert Murdoch family, worth $17 billion, are listed as 28th and 2nd in the media field.  Of note, Netflix’ founder, Reed Hastings (59) is in 132nd at a ‘mere’ $5 billion.

The greatest philanthropist of the wealthy is Warren Buffett.  To date, Buffett has donated more than $40 billion with 99% of the rest of his wealth accounted for following his and his wife’s lives.  Forbes lists seven other billionaires as America’s most giving including Intel co-founder Gordon Moore (91), financier George Soros (90), California developer, Eli Broad (87), oil man George Kaiser (78) and cable TV pioneer, Ted Turner (81).

The richest woman in California with $16 billion is Laurene Powell Jobs (56), widow of Apple founder Steve Jobs.  Marjike Mars (56), one of three heirs to the Mars candy fortune is second at $7 billion.  Meg Whitman (64) is third at $5 billion.

The youngest billionaires are Evan Spiegel (30) and Bobby Murphy (32), co-founders of Snapchat, worth about $4.5 billion each.  Next on the list is Lukas Walton (33) at $15.5 billion, the grandson of Sam Walton.  The youngest woman on the list is Lynsi Snyder (38), heir to the In-N-Out Burger chain.

The oldest person on the list is not Warren Buffett or George Soros.  These 90 year-olds are each a year less old than Bernard Marcus, co-founder of Home Depot and Red Emmerson, a California timber magnate who owns more than 2 million acres.  The oldest woman on the list is Doris Fisher (89), the co-founder of clothier The Gap.

Who is the richest person in sports?  Jerry Jones (77), owner of the Dallas Cowboys at $8.6 billion.  Close on his heels is Stan Kroenke (73), owner of the Los Angeles Rams.

The entire Fortune 400 list can be found at www.Forbes.com.