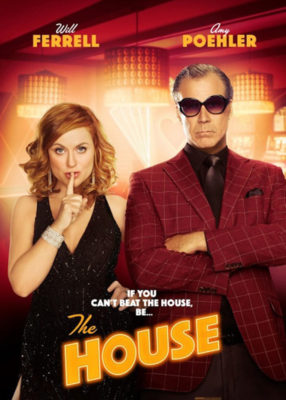 Considering how much we need laughter in our lives right now, it’s indeed sad to have to say just how bland this attempt at a comedy is, considering the OK premise, fast pace and talented leads who have rightfully earned the good will of an adult audience but cannot save this hollow shell of a film. It’s hard to know just where this painfully flat enterprise jumped the tracks and lost its comic mojo. Was it the direction (Andrew Jay Cohen) or screenplay (Andrew Jay Cohen again and Brendan O’Brien) that betrayed the potential? I say “both of the above.”

The simple premise has mom Kate (Amy Poehler) and dad Scott (Will Farrell) repurposing their daughter Alex’s college fund to the admittedly lame idea – “what could possibly go wrong?” — of backing and operating an illegal casino in the half-empty mini-mansion of their gambler-addicted, divorced neighbor’s home.

There is an accurate emphasis on the feeling of middle-class bitterness and despair that permeates our still great country. Kate and Scott may lament the system that exploits them, but they have no problem doing the same to their friends and neighbors. They never have a moment of self-realization that they are the system. Besides the lack of laughs, what’s equally surprising is the gratuitously inserted bloody violence in this failed moral fable that’s really about more hypocrisy and greed than generating laughter. 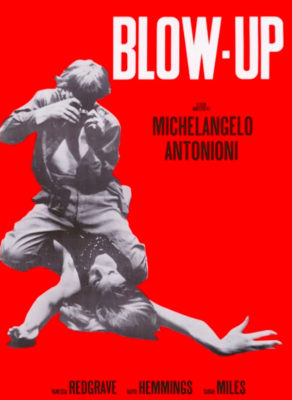 In 1968, Michelangelo Antonioni’s first English language film stunned global audiences with its existential tropes, color palette and meticulous design. Much more than a look at London’s counterculture at a specific time and place, this film played with notions of what is real and what is seen in art and life. Is there meaning in the random dots of enlarged film emulsion? Remember all the enlarged photos of the Grassy Knoll at the moment of JFK’s assassination? Did we find a shooter hiding behind the trees? Maybe, but is there a way to know for certain?

The simple plot follows part of day in the life of a successful London fashion photographer (David Hemmings) who, during a random walk in a verdant park takes snaps of two lovers, and unknowingly photographs what may be a murder.

Many questions regarding this incident remain unanswered. The ambiguity of the narrative is part of the great allure of this extraordinary film that was life changing for so many of who experienced it on its initial releases.

Not so much a murder mystery as it is a psychological one. How will the photographer cope with his new understanding that what one sees may not in fact be real? Even after enlarging film frames multiple times, he is not certain he sees a dead body, that is, until he goes back to the park, finds the body and touches the man’s face. For reasons never made clear, he never calls the police. But when he goes again to the park, the body is gone.

When a mime troupe enters the park and pretends to play tennis, the “ball” sails over the fence and the mime players and audience all stare at the photographer to retrieve and toss back the imaginary ball. He does, and then eventually walks away to the sound of the tennis game. He and we hear the smack of a ball on a racket and the patter of running feet. The final shot before end credits is of the photographer standing alone in the middle of the park’s green expanse and then fading out.

The movie is best remembered by many not for the remarkable series of black and white stills during enlarging process – (almost a stand-alone movie itself) — but for the silly romp the photographer has with two teenage girls on a roll of background paper in his studio. At the time, this was the first, albeit very brief inclusion of pubic hair in an internationally distributed feature film.

Generous extras round out this superb 4K digital transfer of perhaps the most important and influential film of the 1960s. I liked Blow Up of “Blow-Up”, a 2016 documentary on the making of the film. Also included are vintage interviews with Antonioni, David Hemmings and Jane Birkin (one of the teen girls). There’s a fascinating 2016 conversation between photo curator Philippe Garner and actor Vanessa Redgrave.

A must have title for the home library. Criterion. Blu-ray. 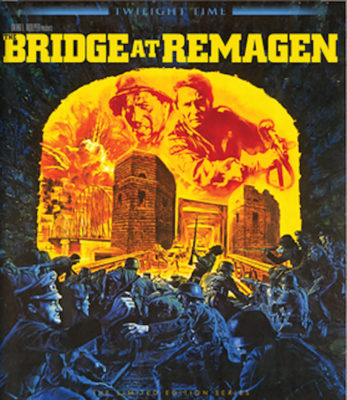 In this stirring, action-filled tale of a desperate battle in the waning days of World War II, George Segal is a war-weary combat team leader charged with taking a bridge over the Rhine during the Allies’ final push into Germany; Robert Vaughn is his German opposite number, who’d rather blow up the bridge than have the Americans capture it, thus ending the last great German stand in the West.

The following photo of the real Remagen Bridge was taken by my father (a combat surgeon in Patton’s 94th Infantry Division) shortly after the bridge was destroyed. 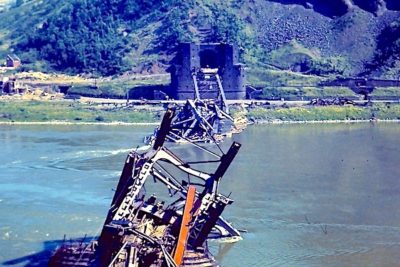 The solid direction by John Guillermin (The Towering Inferno) is greatly enhanced by Stanley Cortez’s masterful cinematography. The one and only Elmer Bernstein composed and conducted the rousing score. Besides George Segal and Robert Vaughn, co-stars include the always reliable Ben Gazzara, Bradford Dillman and E.G. Marshall. Twilight Time Movies (Limited Edition). Blu-ray.