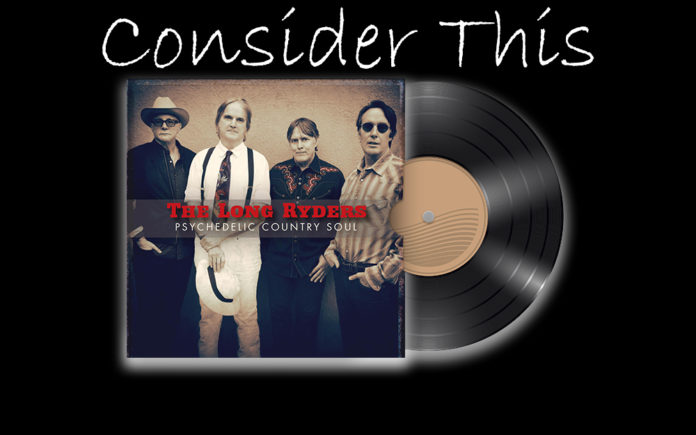 Sid Griffin showed up in Los Angeles in the late ‘70s, inspired by the burgeoning Punk Rock scene and harboring affection for bands like the Byrds, Buffalo Springfield and The Flying Burrito Brothers. The Kentucky native had graduated the University Of South Carolina with a Bachelor’s Degree in Journalism, before heading west.

Although he attended law school to appease his parents, he dove head first into L.A.’s musical melting pot, cycling through a couple of bands, Death Wish and The Unclaimed, before forming The Long Ryders in 1981. The original line-up included Sid on vocals, guitar, autoharp and bugle, Steven McCarthy on guitar, pedal steel, mandolin and banjo, Des Brewer on bass and Greg Sowders on drums.

The four-piece took their musical cues from Country Rock progenitors like former Monkee, Mike Nesmith, ex-teen idol Rick Nelson and Georgia/Florida transplant Gram Parsons. The band fell in with other ‘60s music aficionados like the Bangles, The Dream Syndicate, Green on Red, Rain Parade and the Three O’Clock. This loose collective was known as the Paisley Underground.

Wearing their influences plainly on the sleeves of fringed suede jackets, they came out swinging on their debut EP 10-5-60. Using that as a calling card they gigged around town consistently, initially signing with Lisa Fancher’s ground breaking indie label, Frontier. At this point, Des Brewer left and was replaced by Tom Stevens.

Their first long-player, Native Sons ” arrived a year later. Not only did the band recreate the cover of an unreleased Buffalo Springfield album, they also enlisted Flying Burrito Brothers producer Henry Lewy and even convinced ex-Byrd Gene Clark to sing on a track.

It might have seemed as though the band had a sincere case of copycat-itis, if the guys didn’t have the musical goods to back up their predictions. The album did well enough to get them a deal with Island Records.  The iconic label boasted an eclectic roster that featured everyone from Bob Marley, Fairport Convention and Nick Drake to Roxy Music, King Crimson and U2.

Their next two albums, 1985’s State Of Our Union” and 1987’s Two-Fisted Tales sharpened their songcraft. Although The Long Ryders’ sound still revolved around the Country Rock blueprint that was minted in the ‘60s, their lyrics mirrored more contemporary concerns. Along with L.A. bands like X, the Blasters and Los Lobos, their songs reflected the growing divide between the haves and the have-nots in the era of Reganomics. The band had established a passionate fan base and won new fans after opening a string of shows for U2. Unfortunately, they never really broke through commercially. Frustrated, Steven McCarthy and Tom Stevens left the band. Not long after that, Sid Griffin and Greg Sowders quietly called it quits.

In the ensuing years Sid continued to make music with The Coal Porters, Western Electric and as a solo artist. He also carved out a niche as a well-respected music writer, penning a definitive Gram Parsons biography, as well as critical studies on Bluegrass and Bob Dylan. Steven McCarthy hopscotched to bands like House of Freaks and Gutterball. Meanwhile, Greg Sowders left the performing side of business to work in music publishing and Tom Stevens moved back home to Indiana and got a degree in computer science.

As it turns out, the Long Ryders kind of presaged the alt.country/Americana music movement that took hold in the ‘90s. Bands like Uncle Tupelo, (which consequently splintered and became Wilco and Son Volt), Whiskeytown, Jayhawks and I See Hawks in L.A. picked up the torch that Long Ryders originally lit in the early ‘80s. In fact, Steven McCarthy briefly joined the Jayhawks in the early aughts.

Despite everyone’s hectic schedules, the band has managed to reunite periodically over the last few years in 2004, 2009 and 2014, respectively. A live album, The State Of Our Reunion, came out of the the 2004 tour. Three years ago, Cherry Red Records released a definitive box set entitled Final Wild Years.

In 2017 the band received an offer from Larry Chatman, who began his career as part of the Long Ryders’ road crew. These days Larry works with iconic Hip-Hop producer Dr. Dre, and he was able to secure a week’s worth of recording time in Dre’s state-of-the-art recording studio gratis, as a thank you to the band who gave him his start. Naturally, the guys leapt at the opportunity to make new music. They managed to corral producer Ed Stasium, (Ramones, Living Colour, Smithereens, Marshall Crenshaw, among many), who was behind the boards for Two-Fisted Tales, and decamped to Record One studio for a week. Despite the fact that the band members live in four separate cities stretched over two continents, they were able to come together and record their fourth official long-player, aptly entitled Psychedelic Country Soul.

The opening two tracks set the tone for the record. “Greenville” blasts out of the speakers anchored by a walloping backbeat, tensile bass and swaying Guitar. The propulsive jangle is aided by infectious harmonies and a spiraling guitar solo. The enthusiasm is palpable. Even as the lyrics plot a great escape, it’s clear these guys know they’re “heading out to the great unknown” and they’re up for the challenge.

Conversely, there’s an autumnal ache to “Let It Fly.” Rippling mandolin, weepy pedal steel and sawing violin give the tune a rustic patina. The guys get some vocal assist from Paisley compatriots Debi and Vicky Peterson of the Bangles. Their soral harmonies soften pensive lyrics like “Sun is going down inside my head, what’s wrong I thought, something that I said/The tears they started falling like feathers from a tree, bird song is silent now, it’s only you and me.” Pedal steel and violin intertwine for a sweet do-si-do on the break that undercuts the song’s inherent melancholy.

Other than the offer of free studio time, the impetus for this record came out of the boredom of playing the same (old) songs on tour. The new stuff they’ve written for this album mine their original influences, but also reflect the decades they’ve spent apart creating music with other musicians. The best cuts here bridge the eras between the ‘60s and the 21st century.

Tom and Sid collaborate on “What The Eagle Sees” which blends a pile-driving beat and sinewy guitar, giving the song a Punk-y edge. Sandblasted riffs ricochet off cascading percussion and angular bass lines. The lyrics examine the ruination of the planet through the eyes of the Eagle; “Her burning eyes from dirty skies, now drawing breath, yet nothing’s left, her lungs now sting, she pumps her wings/See-see what the Eagle sees, a burning sky from sea to sea.”

“The Sound” is a sunny shout-out to the power of music and the adventure it brings. Shimmery guitars ring and chime over a whip-crack rhythm, a wash of keys and rubbery bass. Smoky harmonica notes bookend each revelation. “I followed where it led me and got further from my home, but the sound it never let me down and it gave me room to roam.” As the tempo accelerates on the instrumental break, each guitar solo adds a new color to the kaleidoscope of sound.

“Molly Somebody” is sleek yet wistful. Arching guitars connect with rumbling bass and a sturdy rhythm. The lyrics quietly consider the fate of people who lost in the shuffle and feel left behind; “She fell on me like a star, when all the colors were gone, I knew her face in the dark, before the light of dawn/Molly, somebody’s calling out your name, I think it’s me.”

The action slows for on a couple tracks, “If You Want To See Me Cry” and “California State Line.” The former is a high-lonesome weeper accented by filigreed acoustic guitar, mournful pedal steel and keening violin. There’s an ache in Sid’s voice that matches lyrics like “If you want to hear me cry, just say her name, if you want to hear me weep, or go insane/Nighttime to sunrise, if you hear a sobbing sound, here comes tomorrow, so I must be feeling down.”

The latter is a dusty travelogue, a slow-burning lament propelled by yearning pedal steel, swooping violin and liquid guitars over a clip-clop beat. A weary wayfarer recalls a peripatetic existence as he crosses state lines; “Rolling up Flagstaff the chariot shifts to low gears, I look in the mirror and I’m going back 30 years.”

Other interesting tracks include the Countrypolitan heft of “Gonna Make It Real” and “Bells Of August,” which shares some musical DNA with Bob Dylan’s “I Shall Be Released.” The Ryders also offer a heartfelt version of Tom Petty’s “Walls,” which features Debi and Vicki Peterson’s warm backing vocals.

The record closes with the expansive title track. Guitars pivot from jangly to cyclonic to sitar-riffic, recalling The Beatles’ “Tomorrow Never Knows” and Tom Petty’s “Don’t Come Around Here No More.” Despite the song’s hypnotic vibe,  the lyrics rather pointedly insist we wake up to the destruction and havoc wreaked upon the planet; “Can you still breathe the air and drink the crystal waters/Is that what you want to leave for your sons and daughters?” The melody becomes positively modal on the instrumental outro, adding a tambura beat, silvery harmonica, plinky piano, snake charmer melodica and latticed guitars, before quietly drifting off into the sunset.

More than 35 years ago, Sid and Greg placed an ad in a local L.A. paper searching for a “singer and guitarist wanted for ‘60s influenced group: folk-rock, Tex-Mex, soul, surf, psychedelic. Two ex-Unclaimed members want the Byrds, Standells and Seeds to ride again.” During their initial run, The Long Ryders achieved all that and more. Although they never experienced the commercial success they deserved, their artistic accomplishments continue to resonate with 21st century acolytes like Avett Brothers, Lumineers and Mumford & Sons. Psychedelic Country Soul succeeds in burnishing The Long Ryders’ legacy.