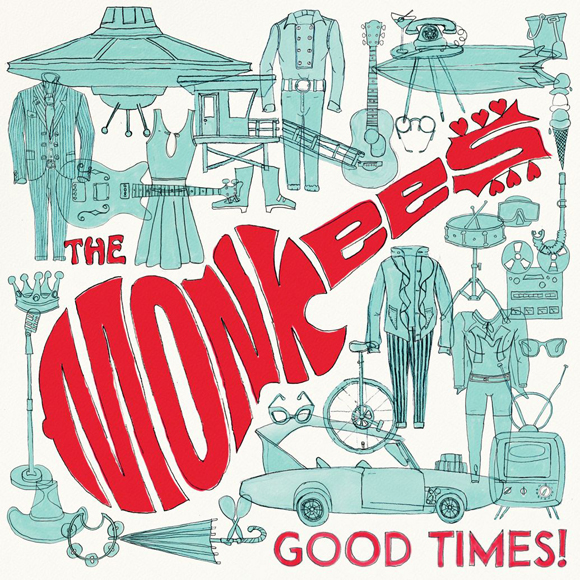 50 years after their debut, the Monkees’ new album, Good Times hit the Billboard charts at #8. Pretty good for a band that has been written off as pre-packaged and manufactured when they first arrived on the scene in 1966.

Inspired by the success of the Beatles, budding filmmakers Bob Rafelson and Burt Schneider (who went on to helm seminal movies like “Easy Rider” and “Five Easy Pieces”), pitched a television series that centered on the mis-adventures of a struggling young Rock group.  Screen Gems greenlit production and the duo began casting the band.

They settled pretty quickly on Davy Jones, a British actor-singer who had already made a splash on Broadway playing the Artful Dodger in the musical “Oliver.”  Placing an ad in Daily Variety, the producers saw 437 hopefuls, (including future Buffalo Springfield and Crosby, Stills & Nash member, Stephen Stills). In the end, they cast another actor-musician, Micky Dolenz and two musician-actors, Michael Nesmith and Peter Tork.

Micky Dolenz had grown up in a showbiz family, appearing as a kid in his own television show, “Circus Boy.” After high school, he fronted a garage band, the Missing Links. Texas native Mike Nesmith had moved to L.A. to make it as a musician. He had already written and recorded music as Michael Blessing and played in a trio called Mike & John & Bill. Peter Tork had grown up on the East Coast and was a part of the thriving Greenwich Village Folk scene. Ironically, he heard about the auditions from Stephen Stills.

“The Monkees” inaugural episode aired on CBS in September, 1966. The show was preceded by their first single, “Last Train To Clarksville,” which was already climbing the charts.  Screen Gems had cannily hired producer Don Kirshner to supervise the music. In turn, he surrounded the band with sharp songwriters like Boyce & Hart, Neil Diamond and Goffin & King.

Although they sang on the self-titled album that arrived a month after the series debut, the guys weren’t allowed to play on any of the songs. Mike managed to get one of his own songs, “Papa Gene’s Blues,” included alongside hits like “I Wanna Be Free” and “Take A Giant Step.”

The show was an immediate hit, combining the whimsy of the Beatles with slapstick and a hint of Marx Brothers-style subversive humor.  Micky, Davy, Mike and Peter grudgingly went along with Screen Gems’ dictatorial mandates. Monkeemania was in full swing and the guys were ushered back into the studio for More Monkees which arrived in January 1967.

Their second effort spent an astonishing 18 weeks at #1 and went on to sell 70 million records. But the guys were starting to resent their limited roles in the studio.  In addition to filming the show, recording music and endorsement deals, the band had actually begun to tour, proving that the four-piece were all proficient and credible musicians.

Luckily, Bob Rafelson and Burt Schneider took the band’s grievances seriously. After a particularly fractious meeting (wherein Mike Nesmith punched a wall and told Kirshner “that could have been your face”), the Monkees were given creative control. Their next two albums, Headquarters, and Pisces, Aquarius, Capricorn & Jones Ltd (both released in 1967),  were pretty great. Not only did they play their own instruments, Mike, Peter and Micky each contributed memorable original songs like “Sunny Girlfriend,” “For Pete’s Sake” and “Randy Scouse Git.”

The critics refused to pay attention, still snottily referring to the Monkees as the “Pre-fab Four.” They willfully ignored the fact that bands like the Byrds and the Beach Boys also relied on studio musicians at the beginning of their careers. But the little girls understood, so did the Beatles, who praised the Monkees’ music and befriended the band.

The Monkees continued to tour, (hand-picking one opener, Jimi Hendrix, who made his American concert debut under their aegis).  They recorded more albums and the TV show remained popular, allowing the band a platform to champion new music by Frank Zappa, Tim Buckley and Charlie Smalls. They even made a feature film, “Head.” Trippy and vaguely anti-war, it was co-written by future acting superstar Jack Nicholson.

But by the end of the ‘60s, the party was over. Each of the Monkees managed to make their mark in the ensuing decades. Davy continued to sing and act, recording solo albums and appearing on television in live theatre.  Micky did the same, but he truly began to thrive behind the camera, producing and directing programs in Great Britain.

Peter actually contributed to Beatle George Harrison’s Wonderwall album, he also wrote and recorded with a series of bands, acting occasionally and even teaching school. Mike was not only a progenitor (along with Rick Nelson and Gram Parsons) of the Country Rock style popularized by the Eagles, he also wrote classic songs like Linda Ronstadt’s first hit, “Different Drum.” He is probably best known

In 1986 MTV began playing blocks of Monkees reruns and a whole new generation discovered the timeless qualities of the Monkees’ music and their meta-comedy. Micky, Davy and Peter took advantage of their newfound popularity and toured as a trio.  They also recorded a new album, Pool It, unfortunately, the songs hewed closer to the shiny, synthesized sounds of the day, rather than the jangly ‘60s style that made them famous.

They continued to tour sporadically, sans Mike coming together for milestone years. They recorded Justus in 1996 and Mike acted as producer. It wasn’t unpleasant, but it didn’t match their ‘60s classics. They embarked on a massive concert tour in 2011 to commemorate their 45th anniversary.

Sadly, Davy Jones suffered a heart attack and died rather suddenly in early 2012. As a tribute to their fallen comrade, Mike joined Micky and Peter for the first time, playing a series of concerts later that year. In 2013, Micky released Remember, a rueful solo album that paid homage to Davy, as well as the late Harry Nilsson. It was a droll trip down memory lane, revisiting Monkees classics and recasting tracks by the Beatles, Bread and even the Archies.

To mark their 50th anniversary the band and their label, Rhino Records, wanted to do something special. So they recruited Fountains Of Wayne bassist, Adam Schlesinger, and set about crafting an album that stayed true to their ‘60s roots, but wouldn’t feel anachronistic.

Aside from creating indelible Power Pop hits like “Radiation Vibe” and “Stacy’s Mom,” Schlesinger was responsible for creating the title track for Tom Hanks’ “That Thing You Do” movie.  An affectionate paean to one-hit-wonder bands from the ‘60s, the song felt like an authentic (albeit obscure), relic from that era.

The Monkees’ 12th album gets off to a rollicking start with the title track,   a Harry Nilsson song the band considered recording in 1968. Here, they actually use Harry’s original demo featuring his vocals and piano. The tune is anchored by rickety percussion, stinging guitar notes from Mike and Adam, and choogling bass lines.  Micky’s voice winds around Harry’s blustery tenor, perfectly complimenting the late songwriter’s playful, off-the-cuff performance.

Even though critics quibbled about the Monkees’ authenticity, musicians who came of age in the ‘60s and ‘70s appreciated the band on a more visceral level. When Adam asked a few famous fans to contribute songs to this project the results were electric.

First up is XTC architect Andy Partridge’s “You Bring The Summer.”  An effervescent Power-Pop jangle, it’s the aural equivalent of a Charms Blow-Pop. Candy coated guitar riffs yield to a sugary bubblegum center. Micky’s lead vocals are appropriately starstruck as he catalogues his sweetheart’s attributes; “The birds and the bees will fly around me, even though we’re deep in January/When you come around you bring the summer.”  Suitably Psychedelic sitar-y guitar snakes through the instrumental break.

Another contribution from across the pond is “Birth Of An Accidental Hipster.” A collaboration between the Modfather, Paul Weller and Oasis leader Noel Gallagher, it’s an acidic pastiche that feels like “Lucy In The Sky With Diamonds”-meets-“Glass Onion.” Mike handles lead vocal duties over a thumping beat, drony piano and modal guitar.  Trippy lyrics like “I’m heading out in the sunshine baby, feeling to your knees, nobody else but my own sweet self” are positively lysergic. Micky pipes up with a vaudevillian verse that is pure whimsy.

The biggest surprise comes from Death Cab For Cutie’s Ben Gibbard. “Me & Magdalena” is a soulful Country charmer perfectly suited to Mike’s tender croon. The arrangement is a delicate wash of burnished piano notes, dusty guitar and trap-kit drums. All the elements coalesce along with Micky’s understated harmony vocal, cloaking the song in a lovely Laurel Canyon patina.

Digging deep in the Monkees music vault the band came up with a few old tracks that fell by the wayside back in the ‘60s.  The instrumental track for Jeff Barry’s “Gotta Give It Time” is old enough to qualify for its own AARP card, yet, it sounds surprisingly fresh and urgent. Fuzz-tastic guitars and a swirly organ glide over a rubbery backbeat. Micky’s 21st century vocals send the song into interstellar overdrive.

They also revisit the Goffin and King classic, “Wasn’t Born To Follow.” Originally a Countrified hit for the Byrds in 1968, the Monkees took a pass at it a couple of months later. Here, the Wrecking Crew’s Folk-flavored   instrumentation is vintage ’68 but Peter’s strong lead vocals were recorded just a couple months ago.

The sweetest revelation is “Love To Love,” a Neil Diamond tune that the boys toyed with in 1967 and 1969, but abandoned. (Perhaps intent on proving their Rock bona fides with their own compositions). In any case, it’s the perfect blend of Spaghetti Western guitar, sly organ colors and rattling tambourine. The lead vocals come from Davy Jones, adding an unexpected note of poignancy to the proceedings.

Always the consummate singer-songwriters, Peter and Mike each contribute a track. Peter’s “Little Girl” is a summery Country waltz originally wrote for Davy. In his absence Peter is front and center, the song’s gauzy tone is momentarily eclipsed by a spiky guitar solo.

Mike’s “I Know What I Know” is an aching piano ballad. His vocals are as delicate as gossamer over a lattice of piano, bass chamberlain and guitar. It’s an unambiguous love song, simple and succinct; “I know what I know, and what I know is- I know nothing without you.”

The album closes with the Psychedelic-Funk of “I Was There (And I’m Told I Had A Good Time), co-written by Micky and Adam Schlesinger. Propelled by Micky’s tribal beat and off-the-cuff lyrics, the title recalibrates the Paul Kantner quip, “if you remember the ‘60s, you probably weren’t there.” Sardonic and irreverent, the track is quintessential Micky.

Sure, the Monkees started as a way to cash in on the Beatles success. Pre-packaged as a television show, they somehow evolved into a real band.  Half a century later, they are still here, and Good Times! is the best album of their career. Somewhere Davy Jones is smiling.