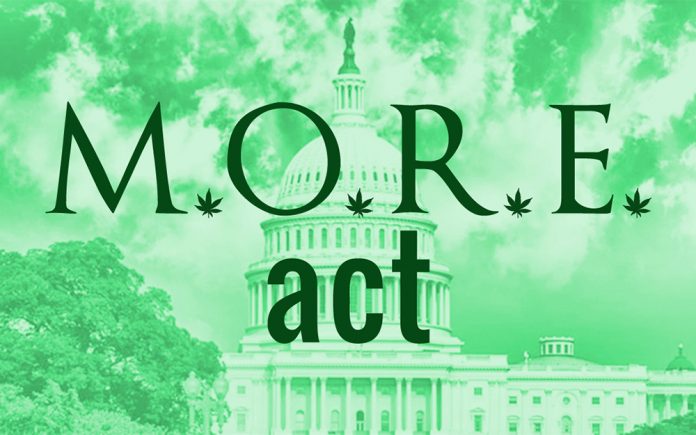 On December 4th, 2020, the U.S. House of Representatives passed the Marijuana Opportunity Reinvestment and Expungement (MORE) Act, H.R. 3884, to remove cannabis from the U.S. Controlled Substances Act. What does this mean for cannabis consumers, pot convicts, and the ever-expanding gray-market industry? The law changes make marijuana [possession, cultivation, sales] no longer a crime. Thus we no longer discriminate against our citizens who are burdened by the criminal records they received under prohibition.

The MORE Act is the most revolutionary and socially conscious federal marijuana reform bill ever passed. It reflects the views of 62 percent of Americans who favor legalizing the adult use of marijuana, while over 90 percent want access to medical cannabis. It completely removes marijuana from the Controlled Substances Act. Schedule I is the most restrictive category, reserved for the most deadly and addictive drugs that have no accepted medical use.

Additionally the Act creates a new federal office, the Cannabis Justice Office whose mission is to establish social equity programs prioritizing weed business licenses and business loans to pot entrepreneurs who were convicted of cannabis crimes. Convicts currently serving time in federal prisons for cannabis violations would receive reductions to their sentences.

A recent U.S. House amendment changed the MORE Act to include limiting cannabis expungement to people who have been charged with nonviolent federal offenses and to those who have not been sentenced with an “aggravating role adjustment” for directing or overseeing federal criminal activity. It also directs the U.S. Comptroller General to include, as part of broader research on cannabis, the “uses of marijuana and its byproducts for purposes relating to the health, including the mental health, of veterans.” A jaundiced eye needs to dissect this down to the weeds (pardon the pun).

The Act does not make it federally legal or federally regulated either. It just opens the gate and allows states to do what they want without any federal issues. For example, the FDA still sees this as a drug that needs approval before being put into a product. They will write regulations when they want to, unless stopped by statute. Will we be able to say cannabis can treat seizures or will the FDA prohibit that label or statement? This should be clarified in the Senate version.

Removing marijuana from the Controlled Substances Act does not legalize marijuana in every corner of this country. It simply ends the federal prohibition of marijuana and allows states and localities to set their own [marijuana] policies as they see fit. It is a choose-your-own-adventure for conservatives or liberals or anyone at any point of the political spectrum to be able to come to that determination — that under our federalist society, cannabis should be locally controlled.

While it would no longer be a federal offense, the violation of local law is something that is still taken under consideration through federal administration, and that includes immigration. Can we deport someone if they are convicted of possessing marijuana?

In removing marijuana from the Controlled substances Act structural barriers that stemmed from federal prohibition: lack of access to bank accounts, and small businesses’ inability to receive standard tax treatments as every other sector of the economy are no longer in place.

On the business end, the MORE Act also sets a 5 percent federal tax on all cannabis sales. It will then increase by 1% each year and cap at 8%. And yes there is no overly-complex, tiered taxation system that unfairly gouges cannabis consumers and companies, like those seen in California or Colorado. The excise taxes collected would go toward regulatory oversight, funding expungements and resentencing procedures, and researching how legal cannabis will affect the population at large.

It will be necessary to ensure the Senate does not muddy the ACT with more amendments damaging to the original spirit of the MORE Act: removing cannabis from the Schedule I category.

info@ruthahillrn.com for questions or comments.