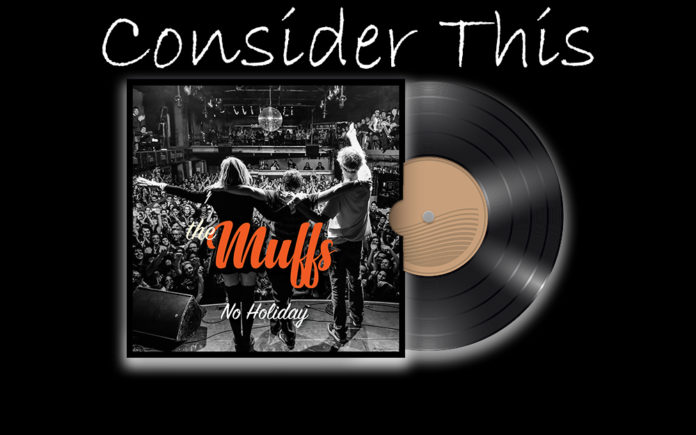 Kim Shattuck took no prisoners. Kim Shattuck possessed one of the most distinctive howls in Rock N’ Roll. Kim Shattuck a gift for sarcasm and a biting wit. Kim Shattuck’s songwriting was cutting and sublime. Kim Shattuck passed away two weeks ago at age 56, following a two-year battle with Amyotrophic Lateral Sclerosis (ALS). But Kim Shattuck left us a parting gift in the form of No Holiday the brand new Muffs album.

Born in 1963, Kim grew up in Orange County and later moved to Los Angeles. Although her exposure to Pop music was minimal as a kid, by her teen years she gravitated toward L.A.’s thriving Punk scene. She cut her musical teeth in the Pandoras. Formed in 1982 by Paula Pierce, the all-female quartet’s sound hinged on an obsessive knowledge of ‘60s Psychedelia and Garage Rock.

Although Paula remained the only original member, they existed on the fringes of the Paisley Underground movement. Their debut, It’s About Time, arrived in 1984, and was embraced by influential KROQ DJ Rodney Bingenheimer. Soon the band was touring with the likes of the Fuzztones, Iggy Pop, the Cramps and Nina Hagen

Kim bluffed her way into the band the following year, by pretending to know how to play the bass, (she played guitar). She learned on the job, and the Pandoras’ sophomore effort, Stop Pretending, displayed a sharp melodic edge without sacrificing their Garage influences. She left the band in 1990, following the dismissal of keyboard player Melanie Vammen, and Paula’s sudden stylistic shift toward Hard Rock and Metal. (Sadly, Paula Pierce died rather suddenly in 1991. Only 32, she suffered from a brain aneurysm).

Kim had already begun stockpiling a trove of original songs, so she joined forces with Melanie, who had been learning guitar, and recruited bassist Ronnie Burnett and drummer Criss Crass to become The Muffs. The four-piece created considerable buzz playing around town and released a couple of singles through indie labels like Sub Pop and Sympathy for the Record Industry. They were quickly snatched up by Warner Brothers Records.

Their self-titled debut was released in 1993, a perfect distillation of Jaggy Punk riffs and fizzy Pop accents. It was immediately embraced by the cognoscenti, and the band cultivated an intensely loyal fan base. The general public was slower to catch on. At the time, Grunge was in its ascendance, grotty-looking latch-key boys swathed in flannel had the floor. Ironically, a year later, label-mates Green Day adopted the same formula, and producer, Rob Cavallo and achieved commercial lift-off. Some might say that Courtney Love and her band Hole also appropriated some of Kim’s fashion sense, vocal style and melodic skills.

So, yeah, The Muffs weren’t featured on the cover of Rolling Stone, but they didn’t dwell, nose to the grindstone, they went back to work. Melanie Vammen and Criss Crass left after the first album and local legend Jim Laspesa subbed behind the kit on tour. Pared down to a three-piece, they began recording their sophomore effort, Blonder And Blonder just as ex-Redd Kross drummer, Roy McDonald joined the fold. A brightly colored blast of fuzz, shag and sunshine, it arrived in the Spring of 1995. A few months later, the band’s profile was raised exponentially, when they covered Kim Wilde’s ‘80s hit, “Kids In America” for the “Clueless” soundtrack.

The band made one more album for Warner Brothers, 1997’s Happy Birthday To Me, before they cycled through a series on indie labels for Alert Today, Alive Tomorrow from 1999 and Really, Really Happy from 2004, as well as two compilations, Hamburger and Kaboodle. In between Muffs commitments, Kim found time to play in The Beards and The Coolies. In 2013, she was asked to join the Pixies on bass, following the departure of Kim Deal. Less than six months later, she had been dismissed. The consensus was Kim’s exuberant stage demeanor had clashed with the Pixies’ more taciturn (tight-assed) vibe. Apparently, stage diving and crowd surfing is frowned upon. Oh well.

Kim didn’t skip a beat, reconvening The Muffs and recording their sixth long-player, Whoop De Doo, reportedly titled after her reaction to getting axed from the Pixies. Not only did the album garner excellent reviews, but it hit #32 on Billboard’s Heatseeker chart. The following year she participated in a Pandoras reunion, this time handling lead vocal chores, in Paula Pierce’s absence. The Muffs toured on and off, their final show was in May 2017.

Kim never made her ALS diagnosis public, she and the band soldiered on, creating No Holiday over 18 months. The record came together in piecemeal fashion, but feels completely cohesive. The album kicks into gear with “That’s For Me.” Terse and compact, it sounds like the perfect theme song for the greatest TV show there never was.

The next three tracks perfectly showcase the band’s sui generis appeal. “Down, Down, Down” is built for speed, all thrashy guitars, and wiry bass lines, cradled by a punishing beat. Kim unleashes her trademark yowl as guitars attack like an angry swarm of bees. The title track opens on a more pensive note, strummy guitar chords pair with croon-y vocals, but they’re quickly supplanted by sidewinding bass and pile-driving drums. Her mien feels casual, but lyrically, Kim pulls no punches as her bon mots detonate like conversational smart bombs. She calls out artistic conceits; mocking a guy “So pretentiously drinking with your pinky out…. You are not the guy who can’t resist another piece of pie,” then concludes “And I wish you’d well, go to hell.”  She switches gears on “Earth Below Me,” as shuddery guitar and a rock steady beat cocoon sweet/tart Girl Group harmonies. Somehow, modal guitars on the break replicate the exotic keen of the qanun (an ancient Greek zither), as Kim soothingly promises “I’ll be nice to you.”

18 tracks unspool in just under 45 minutes and run the gamut. From the sharp and swirly Punk of “Pollyanna,” to the insanely catchy “Sick Of This Old World” which blends winsome backing vocals, ringing guitars, thrumming bass and a crackling back-beat. Conversely, “The Kids Have Gone Away,” opens with a frenzy of feedback, accompanied by Kim’s deadpan “1-2-3-4” count off before locking into a taut and angular groove. “The Best” executes even more of a stylistic 180, offering a Folk-flavored waltz. A stripped-down affair, it’s just Kim’s arch vocals and rippling acoustic arpeggios, sincerely celebrating a pretty swell guy; “You’re the best that I’ve seen, completely awesome and sweet/Maybe you can tell me what you do, to make me head over heels for you.”

Back in the early ‘80s, Kim connected with her Pandoras pals over an affection that bordered on obsession for ‘60s Garage and Psych music. Clearly, that has never diminished as evidenced by three tracks here. “A Lovely Day Boo Hoo” is charmingly Baroque, blending chiming guitars, rock-ribbed bass and a fluttery rhythm. Kim’s vocals are both steely and pliable, while the melody echo Velvet Underground’s Loaded era.

“To That Funny Place” weds anthemic guitar chords to slithery bass lines and a loose-limbed rhythm. The cheerful arrangement belies cryptic lyrics that sort of allude to Kim’s diagnosis and her daily struggle. But it’s quickly subsumed by pummeling drums on the bridge, a whiplash guitar solo and Beatlesque finish.

Finally, “Happier Just Being With You” harnesses brisk acoustic guitars to tensile bass as pounding drums advance and retreat. Kim’s seems content to slightly obscure her lyrics behind the instrumentation. Maybe she’s adhering to that old Joe Perry adage, “Let the music do the talking.”

The best tracks here, (please forgive the Eagles paraphrase) fully take it to the limit. “Late And Sorry” is anchored by a stomping Big Foot beat, ricocheting bass and staccato guitars. The vocals are gravel-y and primordial. One could misinterpret lyrics like “I am clearly ill… I just want it to be easy,” as a veiled reference to her ALS, but all of the songs here were written pre-diagnosis. Still, her trademark howls before the break, as well as the feedback-drenched guitar solo, feel more than cathartic.

The mood is more whimsical on “Lucky Charm.” Shards of splintery guitars connect with boomerang bass lines and a blitzkrieg beat; the melody shapeshifts from Glam-tastic to a loping, Music Hall feel, before accelerating through the final verse. “On My Own” revs like a souped-up muscle car. Smashing power chords collide with bludgeoning bass and a walloping beat, Kim’s defiant vocals charge ahead. The guitar solo is stuttery and cyclonic as the drums pound a triple time tattoo. A final note of warbly feedback finishes this thick slab of Punk-Pop perfection.

Other interesting tracks include the scratchy tilt-a-whirl of “You Talk And You Talk,” the tumbling “Too Awake” and the primitive to and fro of “Insane.” The album closes on an ingenuous note with “Sky.” Sparkly electric riffs lattice over sweet acoustic filigrees, but Kim’s vocals are front and center. The lyrics convey a kind of innocence and wonder, like a kid, lazing on her back, watching the clouds go by; “I am laying on the nice cool grass and now I’m thinking, wonder if the birds can fly straight up and there’s no ceiling.” There’s a purity and ache to this song that feels so bittersweet. If you don’t choke up at the end of this track, well, you’re probably made of stone. It’s a delicate denouement to an amazing album.

No Holiday is a fitting (albeit, unwitting) elegy to Kim Shattuck. The rough edges remain intact, as well as her scabrous humor, her sharp sense of songcraft and her unerring ability to leave her listeners wanting more. Goodnight sweet Kim, in some ways, we hardly knew ye. Still, you gave us everything.