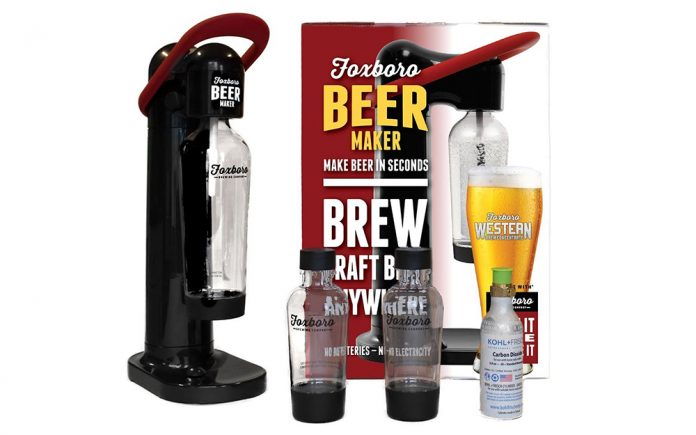 July, 2016 seems like a very different time than right now, some would say a better time. If you were a venture capitalist looking to make a profit through the Foxboro Brewing Co in 2016, the world was looking especially bright. The Foxboro Brewing System was just released to a market that had hit peak craft beer saturation, as independent brewing was finally mainstream after years of fighting for cultural relevance. Not only were new styles of beer being explored by a public thirsty for variety, brewing technology was being innovated at an accelerated rate, with homebrewing being no exception. Companies like Picobrew had been around for several years, simplifying homebrew to a process similar to using a coffee machine. The Foxboro company looked to simplify that concept further. If Picobrew was the Mr. Coffee of the beer world, their system was going to be the Sanka. For a while there, it looked like instant beer was the next evolution of homebrewing.

And suddenly, the Foxboro Brewing Company disappeared as quickly as it arrived.

Novel approaches to making homemade beer were nothing new, the Mr. Beer homebrewing kit had been around since 1993. Employing a plastic, barrel shaped vessel to ferment your beer in, the Mr. Beer employed extract brewing, a simplified way of making beer at home that uses pre-made, concentrated wort solutions. It took almost twenty years for another new homebrewing method to emerge, this time in the form of 2010’s Pico brewer. Using drop-in pods, Pico’s brew machines offered a Keurig-style approach to brewing suds, but it still took 7-14 days for you to enjoy the beer it made. There was plenty of room in the homebrew market for someone who could offer the public a truly instant beer product that they could enjoy in the moment without wait, and that’s where Foxboro’s ideas came in.

Hype for Foxboro Brewing’s instant beer began summer 2016, as the startup company created a YouTube channel and uploaded four promo videos, all featuring a trio of middle-aged men demonstrating the versatility of the Foxboro brewing concentrate. An article in “Plastics Today” raved about the innovative packaging of the Foxboro beer concentrate, how the Snapsil flexible stick packaging allowed the packets of concentrate to resemble bottles of beer. Regional entertainment publication Dayton.com teased the arrival of “powdered beer” that Foxboro was set to debut, and if you paid attention to any of this initial marketing that was going on, something already seemed terribly, terribly wrong.

You know the feeling you get when you see a movie trailer for an upcoming summer blockbuster, and it only takes you a minute to know that the movie is going to be terrible? That’s the feeling you got from seeing the promotion for Foxboro’s brewing products. You wonder how people can invest so much time, money, and resource into creating something, but then allow it to be promoted like an afterthought. The official Foxboro YouTube promos feature some of the cringiest acting you’ve ever seen, by guys with no beer etiquette whatsoever. They repeat Foxboro Brewing’s catchphrase, “make it like you like it” while talking over each other, putting ice cubes and lemon slices into their glasses of carbonated water and concentrate mix. Dayton.com called Foxboro’s line of liquid concentrates, “powdered beer,” illustrating the failure in effectively communicating what the product is the media. Never the less, Foxboro touted their brewing machine, simply a CO2 home soda maker, and four styles of beer to choose from, as the ability to “brew craft beer anywhere.”

After a short promotional period to build hype, Foxboro Brewing debuted “Western Brew Concentrate,” an American lager, to the American drinking public. While official reviews may not exist, there are 9 user reviews for the concentrate on Untapped, all of them overwhelmingly negative. Apparently, people hated it. Described as watery, malty and rough, tasters slammed Western Brew Concentrate after trying it at beer festivals where it was being promoted. One Untapped reviewer even seemed to be reviewing from home, as his review consists simply of a picture of his kitchen sink drain, and a 0-star rating.

None of the other styles originally promoted were ever produced. The Foxboro Beer Maker, essentially just a water carbonating appliance, can now be found in department store clearance sections at a fraction of its original selling price. As of today, the maligned Western Brew Concentrate is impossible to find, seemingly pulled from shelves and scrubbed from existence. Foxboro’s website is just a landing page with no links, their Instagram deleted. Foxboro brewing’s Facebook hasn’t been updated since January of 2018.

Which begs the question, why?

While researching this article, I found that Foxboro wasn’t the first company to come up with creating instant brewing concentrates. Pat’s Backcountry Beverages had been making beer concentrate since 2008, but by 2018 were looking for new investors to continue operations. As of 2020, both Foxboro and PBB are seemingly defunct and out of business.

Did legal action spell the end for the Foxboro brewing company? Did they infringe on any copyrights that ordered a legal cease and desist? Or was it just a case of a start-up business with big ideas, terrible execution, and not enough funding?

Instant beer concentrate may have been an idea ahead of its time, and for fans of the Foxboro brewing system, the demise of their homebrewing method will remain a mystery.