Back in the early ‘80s, a funny thing was happening in Hollywood, the movie industry began making clever movies that chronicled the teen age experience. They were by turns, funny and smart, sometimes even poignant. Refreshingly, they weren’t condescending. Plus, they got the music right.

“Fast Times At Ridgemont High” and “Valley Girl” fired the first salvos in 1982. The former featured au courant music by Oingo Boingo and the Go-Go’s, the latter upped the ante with a killer soundtrack and live performances by the Plimsouls.

By the middle of the decade, thirtysomething writer-director John Hughes emerged as the unlikely avatar of teen angst. His muse was the young actress Molly Ringwald. Together, they unwittingly ushered in the Brat Pack era. On their third and final film together, “Pretty In Pink,” they introduced the world to a band called the Rave-Ups.

Pittsburgh native Jimmer Podrasky started the Rave-Ups in his hometown in 1979. After a couple of false starts, some back and forth-ing to Los Angeles and line-up changes, the four piece coalesced in 1984. As front-man and lead guitarist, Jimmer was joined by drummer Tim Jimenez, guitarist Terry Wilson and bassist Tommy Blatnik.

An earlier incarnation of the band had secured a deal with the indie label Fun Stuff Records and recorded an EP that had sold out the initial pressing of 3,000 copies. All four guys had gotten jobs in the mail room of A&M Records. After business hours, when everyone else had gone home, the quartet would woodshed on the historic Hollywood lot that originally housed Charlie Chaplin’s Film Studios.

Their sound was cutting and sublime, a smorgasbord of Country, Rock, Punk, Folk and Pop. The band was beginning to make a name for themselves in the L.A. club scene, also, Jimmer had begun dating Beth Ringwald, Molly’s sister. An ardent fan, Molly managed to convince John Hughes to use the band in the new movie they were filming.

For a nominal fee, (basically, whatever they could afford), the Rave-Ups were allowed to record at the A&M studios, using snatches of time in between superstar recording sessions. Fun Stuff had hooked them up with producer Stephen Barncard, (Grateful Dead and Crosby, Stills & Nash). There was a bit of disconnect between the band and their hippie-fied producer, but he did manage to corral legendary pedal-steel player Sneaky Pete Kleinow add his trademark sound to a couple of tracks. 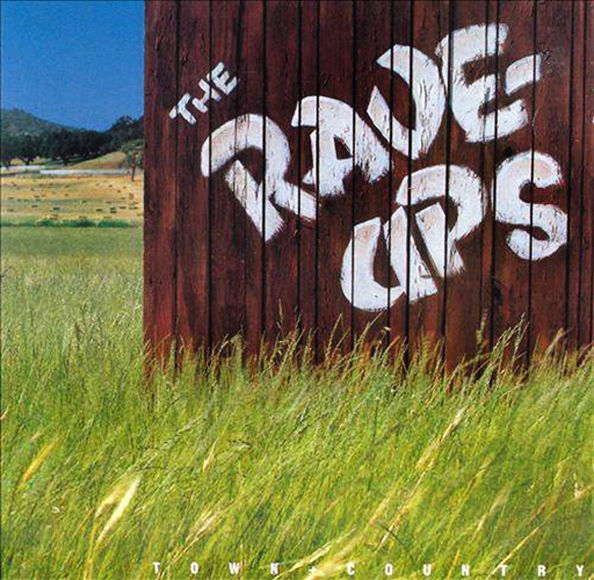 The Rave-Ups first full-length album, Town + Country arrived in late 1985. It immediately garnered airplay on KROQ, as well as college and alternative radio stations across the country. It was critically acclaimed and sold 40,000 copies, a remarkable feat for an indie release. A few months later, MTV filmed the band performing at the “Pretty In Pink” premiere party.

The band was taking off, but the guys still held onto their day jobs. Ironically, A&M had released the Pretty In Pink soundtrack. Aside from the Psychedelic Furs title track and interesting contributions from Orchestral Manoeuvres In The Dark, Suzanne Vega, Joe Jackson and the Smiths, most of the music included was toothless Synth-Pop from New Order, Belouis Some and Danny Hutton Hitters. (Who? Exactly).

The movie had showcased two great Rave-Ups performances; “Positively Lost Me” and “Rave-Up/Shut-Up.” But A&M had neglected to include those songs on the record. The irony wasn’t lost on the band, (as they rolled up posters, flats and other promotional material for the soundtrack in the mailroom), or the general public, or the local music critics who championed the Rave-Ups’ cause.

Luckily, other labels took notice and a bidding war ensued. Unfortunately, it took a while for the band to extricate themselves from Fun Stuff. Throughout 1986 and most of 1987 the band recorded an album produced by Los Lobos sax man, Steve Berlin and Mark Linnett. Sadly, legal obligations kept it in limbo. Only a 12” single ever saw the light of day.

Finally, they signed a deal with Epic Records and their second full-length, “The Book Of Your Regrets” arrived in late 1988. Muscular and even more hook-driven, it was a worthy successor to Town + Country. It should have been a huge record, but the label really didn’t know how to promote it, consequently, sales were disappointing.

In 1990, the Rave-Ups released their third album, Chance. Named after Jimmer and Beth’s infant son, (he is pictured on the cover), it also featured a low-key marriage proposal in the liner notes. Chance delivered on the promise made on the band’s earlier records. It not only doubled-down on their patented Roots-Rock sound, it also added jangly flourishes of ‘60s Psychedelia.

Although it hit #12 on Billboard’s Modern Rock Chart, (hey, remember Modern Rock? What exactly was that?), and received universal critical acclaim, commercially it was a let down. The band called it quits not long after, Terry, Tommy and Tim moved on to other bands. Even Jimmer struck up a musical partnership with ex-Concrete Blonde drummer, Harry Rushakoff and former Agent Orange bassist Sam Bowles. As the Lovin’ Miserys they recorded an album that remains unreleased.

Jimmer ended up a single parent to Chance, although songwriting was his life’s blood, it didn’t pay the bills. He took a job in the movie industry and concentrated on raising his son. Throughout the years the Rave-Ups have reunited occasionally for live shows. Meanwhile, Jimmer never stopped writing music, and in 2013 he recorded his first solo album, The Would-Be Plans.

Although Town + Country has been long out of print, the cool kids at Omnivore Records have reissued the album just in time to commemorate its 30th anniversary. The album kicks into gear with the single, “Positively Lost Me.”

Opening with a tick-tock rhythm and circuitous guitar notes that spiral and shimmer, the instrumentation slowly builds, gathering speed as Jimmer steps up to the mic. Initially, the lyrics feel like a laundry list of community property halved during a contentious break-up; “You lost a lot when you lost me, six paperback books and a dying tree…” But as the tune accelerates it becomes clear that the losses are more intangible.

“You lost my face, you lost my laugh/And then you lost my confidence.” Suddenly a coruscated guitar solo lurches out of the speakers, underscoring the bitterness and regret. The pugnacious mood echoes the song’s obvious musical antecedent, Bob Dylan’s “Positively 4th Street.”

It’s kind of remarkable that this record was written and recorded during the day-glo, New Wave ‘80s era. It somehow manages to harken back to the Band’s Big Pink period as well as foreshadow the music created today by artists like Dawes, Avett Brothers and Jonathan Wilson.
On tracks like “Remember (Newman’s Lovesong),” “By The Way” and “Not Where You’re At (But Where You Will Be),” rollicking Rock & Roll rhythms collide with chicken-fried twang and the results are electric. “Remember..” is propelled by a locomotive back-beat and searching guitar chords that split the difference between stripped-down, Stonesy riffs and blitzkrieg Buckaroo licks. The infectious melody nearly camouflages somber revelations like “the things we love most in life must sometimes leave us.”

Over pile-driving rhythms, guitars that sparkle and chime and high lonesome harmonica, “By The Way” offers a sideways tribute to “the only daughter of a corporation father.” Meanwhile, “Not Where You’re At…” layers finger-picked arpeggios over a hook-filled melody and a hiccough-y beat. It starts off as an arch appreciation of the shallow charms of Los Angeles, as Jimmer drawls “Movies, TV, beauty on every goddamn street.” But grudgingly concludes, “I don’t care what people say, I kinda like this place.”

Jimmer was barely halfway through his second decade when this album was written, but his songs display a level of perspicacity that belied his age. Cascading guitar riffs intertwine with Sneaky Pete’s wistful pedal steel, giddyup bass lines and a click-clack rhythm on “Better World.” With a few neatly turned phrases the lyrics wax nostalgic for simpler times, pay homage to the Greatest Generation and wonder what the future holds.

On “Class Tramp” roiling bass lines and stuttery power chords emphasize the disdain displayed for tribal rituals, social codes and the “uniforms” that define us. “Now there’s you with your thrift-shop shoes, you look as old and your thoughts are new/You want to be decadent, you think that might be fun you’re in the middle class and you’re a class tramp.”

Sneaky Pete adds more weepy pedal steel to the reverb-drenched “Radio.” The lyrics pivot between cryptic testimonials to the power of music; “When you get up, doesn’t mean that much, so you move a little closer to the radio,” and dour observations like “love is just a wrong number that you will answer anyway.”

Other interesting tracks include “In My Gremlin,” a snarly, tongue-in-cheek pastiche of classic Hot Rod songs like Chuck Berry’s “Maybellene” and the Beach Boys “409,” with just a hint of Bobby Fuller Four’s “I Fought The Law.” The Rave-Ups also offer a souped-up take on Bob Dylan’s “You Ain’t Goin’ Nowhere.”

The album originally closed with the band’s swaggering theme song “Rave-Up/Shut Up” but Omnivore has upped the ante by adding 11 previously unreleased tracks. First up is a wry rendition of the Folk favorite, “If I Had A Hammer.” There have been myriad interpretations of the Pete Seeger standard, this one not only leans in the Latin, Trini Lopez direction, it also incorporates verses from Woody Guthrie’s populist anthem, “This Land Is Your Land.”

Four songs here were initially recorded between Town + Country and The Book Of Your Regrets. Each tune is pretty wonderful. “Square Hole” is a jangly Rocker that offers a tart commentary on conformity. Even though “The Rumor” is more of a sketch than a complete song, it’s a still winner; a ringing Folk-Pop roundelay anchored by propulsive percussion and chiming acoustic guitar.

“No No No” is the biggest surprise. Opening with phased, backwards guitar, the track locks into a kinetic rhythm and pinballs between muscular Heartland Rock and swirly Psychedelia. Finally, “See You” is shot through with a Punky, pogo-ing intensity. Guitar hero riff-age washes over this snotty kiss-off.

Polished versions of “Please Take Her (She’s Mine)” and “Mickey Of Alphabet City” appeared on “Book Of Your Regrets.” Here the former adds a wailing, (and somewhat incongruous) sax solo from Steve Berlin. The latter is a sweeter, more easygoing take, blending supple piano notes and acoustic guitar. The reissue closes with another Book song, the wily and philosophical “Blue Carrot.”

Fame and Fortune eluded the Rave-Ups, but maybe that’s okay. Jimmer, Tommy, Terry an Tim created three nearly perfect records. Thanks to Omnivore Records, everyone has an opportunity to discover, (or rediscover) this protean band.