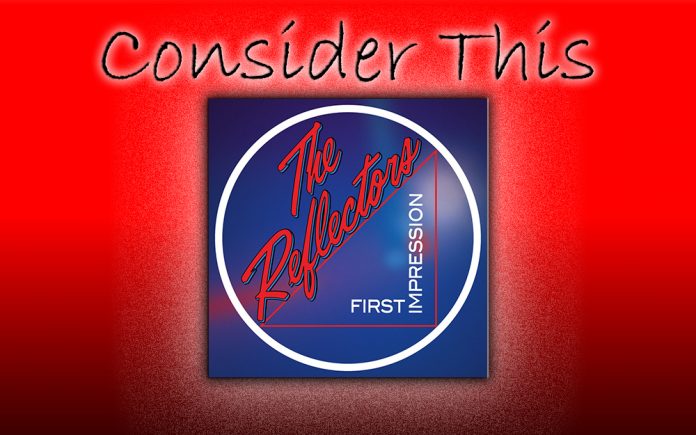 Musical trends come and go, but the sounds of Power Pop and Punk seem to never go out of style. The newest practitioners of that classic genre blend are The Reflectors.

The guys in the band, James Carman (vocals, guitar), Johnny Reyes (drums), Nick Faciane (guitar, vocals) and Ryan Miranda (bass) grew up together in the South Bay region of Los Angeles. They bonded as kids and shared an affinity for all things Punk, along with Power Pop, New Wave and Rhythm & Blues. Inspired by bands like The Who, The Nerves and The Buzzcocks, they began playing music.

Although they attended school together and played music nearly day, each member cycled through a couple of different bands before reconnecting a couple of years ago and forming The Reflectors. The four-piece pretty much hit the ground running, lining up gigs throughout the L.A. area and making a name for themselves as an incendiary live act. Recently they signed with respected indie label Burger Records, and have just released their debut, First Impression.

The record roars to life on the opening cut, “Act A Fool.” Guitars pivot between jangly riff-age and slashing power chords, bookended by rubbery bass lines and a walloping backbeat. James and Nick’s boyish tenors wrap around lyrics that perfectly distill the urgency of instant attraction; “Cause I Can’t deny all the times I tried to get to you girl, I’ve been acting like a fool this time around.” A spiky guitar solo on the break underscores the inevitable rush of hormones, but the boys still manage to stop on a dime.

The album’s first couple of singles each pack a powerful punch. “Teenage Hearts” is powered by stinging guitars, angular bass and bludgeoning beat. Although a burgeoning romance has hit a couple speed-bumps, the souped-up arrangement still manages to accelerate around some hairpin turns. The muscular, twin guitar attack on the break blasts into the stratosphere adding a soupcon of Southern Boogie.

Stuttery guitars, rumbling bass and pummeling drums manage to dirty up the pretty on “Champagne.” Lovelorn lyrics are less than effervescent, pining for a girl who “drinks champagne when she walks at night.” Luckily, a skittery guitar solo elevates this boozy lament.

Three tracks deftly navigate the peaks and valleys of a doomed romance. “Attraction” opens with a pile-driving beat, zig-zag bass and distorto guitars that recall the Raspberries classic, “Go All The Way.” Bypassing Tinder, the lyrics are up close and personal; “I wanna know what you are drinking, sit next to me Girl, because I’m the one.” That level of certitude is mirrored by the combustible guitar solo on the break.

By “Situation Critical,” this guy is a ticking time-bomb of love. Slash and burn guitars connect with search and destroy bass lines and a meaty, beaty, big and bouncy drum tattoo. Clearly, consummation is just a shout away; “My heat seeker is locked on you, your radiation’s got me burning too/I can’t tell if it’s something that you did, I think it’s your spell, my phasers are set to sin.”

But the bloom is definitely off the rose on “Baby, It’s You.” Yelp-y vocals ride roughshod over rat-a-tat guitar riffs, strafing bass lines and a rough and tumble rhythm. To paraphrase the Pretenders, “lust has definitely turned to anger.” Domestic discord escalates and takes a deadly turn; “It’s so cold and not worth the fight, Ah, but it’s alright, you’re chasing me down with a knife/Ah, but it’s alright, I’m bleeding all over your floor, all over your floor.”

The best tracks stack right next to each other toward the end of side two. “Break Me Down” has an AM Pop Radio shimmer that could easily sandwich between Badfinger’s “Baby Blue” and Cheap Trick’s “Surrender.” Downstroke guitars are matched by boomerang bass lines and a flickering kick-drum beat. The buoyant melody, razor-sharp instrumentation and the scorching guitar solo on the break nearly camouflage the lovesick angst of lyrics like “And I don’t find the need to believe that there is someone particular for me/Because everyone is mediocre and can’t compare to the water in your sea.”

Crisp rhythm guitar riffs partner with ringing power chords, prowling bass and a crackling beat on “It’s Alright.” Even though it is, apparently, alright, the guys still offer some cautionary guidance; “Don’t set your soul just for the fiasco, take my advice, trust me when I say so,” right after scuzzy guitars hopscotch through the break.

Finally, “U Should Be My Girl” opens with the (always thrilling) sound of a guitar plugging into an amp, as scattershot riffs collide with sweeter shang-a-lang flurries. Meanwhile, marauding bass and a blitzkrieg beat anchor the action. Despite the Prince-ified spelling of the personal pronoun “U,” the lyrics never follow through turning the “to” into a “2.” Still, teenage kicks can be had when “You come running to me, I come running to you, you came running to me and cried, you say I’m perfect for you.” They insistently repeat the title’s conceit until fuzzy guitar notes fade into the ether.

Other interesting tracks include the cyclonic gale force of “Storm And Thunder.” The album closes with the Power Pop/Punk combo-platter of “Caught Me Off Guard.” Brittle and brutal in all the right ways, it features rapid-fire guitars, sinewy bass runs and brawny backbeat.

The Reflectors debut is, as they say, all killer, no filler. These guys manage to distill their influences without ever sounding derivative or calculating. Monster hooks line up next to crunchy choruses and lacerating arrangements, the result is a heady musical brew. They go beyond making a good First Impression, and wind up making a lasting one.