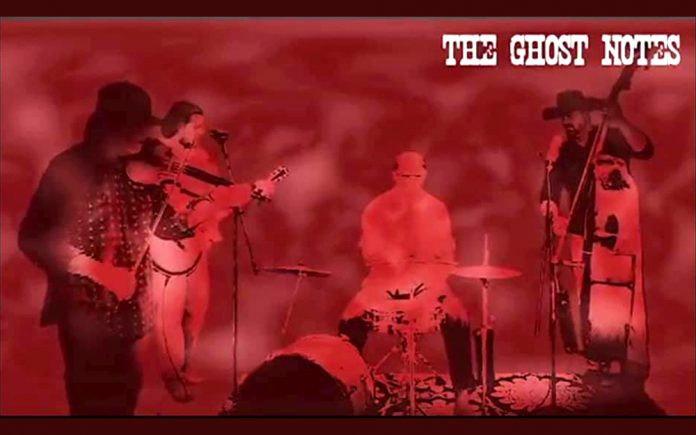 Part of the joy in being a Deadhead in the Grateful Dead universe was in wedding yourself to a story that was longer than your life. Where ghosts of tunes are grasped from the air and notes are chased by a guitar that harks an American tale of yesteryear. The Grateful Dead is a band that started a collective improvisatory experience. The only band where each member was his own wandering nucleus, yet somehow they made magic. The last time I watched the Grateful Dead perform, I was a longhaired kid in college, grasping the front rail with my friends, gazing upon a furry browed Jerry Garcia. It was 1995, during a swelter of summer in a desert much like this one.

The Grateful Dead were truly great, by which I mean, were able to abide some portion of mystery, and allow it to come through them without naming it or taking too much pride in it, or appropriating its surface aspects as a pose or strategy. The music was yours to experience, as a gift.

This is the gift of The Ghost Notes, four gentlemen who never let the dust settle upon their instruments, nor let their craft subside this past year while the rest of the world seem to have frozen in time. Their long-awaited return electrifies the stage at Casuelas Café in Palm Desert this upcoming May 1st, and to experience the catalog that is the Grateful Dead, you need not buy a plane ticket or hitchhike to see them. The Ghost Notes forthcoming performances promise a psychedelic explosion into the valley music scene ahead.

The songs take you to a place that is glistening with promise whilst we emerge from a sea of chaos. As we premiered their performance at the CV Horse Rescue Benefit, where we were treated to the uproar of Shakedown Street to a rousing Bertha, prophetic beat of Scarlet Begonias, and landing the iron clad roots of Operator. An urban desert landscape felt synonymous to the characters in the tails pouring from the songs. Our boots got dusty, the wind unforgiving, but the band played on.

“The catalog of the Grateful Dead is so vast, we never stopped playing, and we’re working on bringing new surprises to the set,” says Mike Hammons, lead vocals and bassist.

Hammons history within the culture of the music itself stretches from classic blues to old world stylings in country add an immersive greatness to his craft. 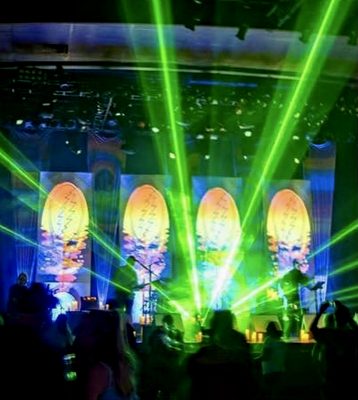 Alongside Hammons, the incomparable electric wizardry of Damian Lautiero on lead vocals and guitar. Bobby Furgo on the ivories and violin, bringing his majestic sounds to the forefront. On drums and percussion the master of rhythm himself, Rob Peterson, whom also perfecting his craft in audio/visual music production to lend nuances to the Ghost Notes experience.

“We were very excited to make some noise again,” says Lautiero, who’s introducing his Garcia-inspired custom guitar Stella Blue, a gorgeous conduit to all that is electric.

“We can easily play 4 to 5 sets without repeating a song, as of now, and we still have two whole entire sets that audiences have yet to hear,” says Hammons.

“The band is also working on an Americana set for the true old world music sound,” says Hammons, who’s love for the classics inspired him to bring his upright bass beside the legendary Bobby Furgo’s violin which hints to a possible upcoming all acoustic set.

The thrill of being a deadhead, is you would hear the band reincarnate itself in a new form with new effects from each musician, yet playing in a way that was familiar but not competing. Playing the songs you love but going to completely new places in the jamming sections. This is where the Ghost Notes bring the full experience, both improvisatory and ever-changing, and you are guaranteed something new every time.

“We could easily play a three night run without repeating a song. We plan on releasing those tunes just a few at a time,” says Hammons

“We do this to bring a positive experience to our audience,” says Hammons.

No matter who you are or where you have been hiding, we welcome you to venture the experience. Four musicians who are masters of their craft, tirelessly give their audience the opportunity to embrace the magic within the power of music. The gentlemen of the Ghost Notes are ready again, moving forward like that northbound train, calling to tell the tails, where strangers become friends and the songs bring us back to where we were meant to be… and it’s all for you.

The Ghost Notes perform May 1st. 7pm on stage at Casuelas Cafe in Palm Desert