Desert Theatreworks kicked off their 2019/2020 season with, “The Savannah Sipping Society,” a sure-fire hit!   Jessie Jones, Nicholas Hope, and Jamie Wooten are an award-winning writing trio who have written comedy for TV, Off Broadway, and movies, and are best known for creating strong female roles.  In the same vein as Golden Girls, they have penned a remarkable script that will have you chuckling long after the curtain comes down.

Anais Nin said, “Each friend represents a world in us, a world possibly not born until they arrive, and it is only by this meeting that a new world is born.”   No words ring truer than the friendships reflected in this heartfelt, touching, laugh-a-minute comedy.  Four women, all in the midst of change, meet as strangers and build a foundation of friendship that will carry them through their transitions with love, laughter and a little bit of bourbon. 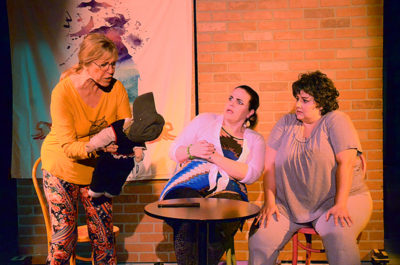 Meet Randa Covington, (Leanna Rodgers,) an ambitious Architect who believes in logic and thinks that if you work hard you’ll get the recognition you deserve, until she learns that she has just lost out on the partnership offer she expected to receive from her company, when it’s given to a 30 year old man. Dot Haigler (Shirley LeMaster,) has been a rudderless ship since losing her husband shortly after their retirement in Savannah and Marlafaye Mosley, (Adrina Reyes,) a fun, rambunctious Texas transplant is still reeling from a divorce after her 60-year-old husband was caught cheating on her with a 23 year-old. And then there’s Jinx Jenkins, (Rebecca Hertsgaard,) the life coach who has offered to help the women get their lives back on track, but in the process may just learn how to stay in one place long enough to find her own life path.

It’s pure southern magic and charm when these four women get together. They will have you wishing that you were joining them for happy hour on Randa’s veranda.  Randa, Dot, Marlafaye and Jinx, will make you snort-laugh and forget your troubles, while you laugh at theirs.  You won’t be able to help cheering them on, as they navigate their lives in new directions and find everlasting friendship along the way.

This ensemble has the best chemistry you’ll find on any stage.  Rodgers, LeMaster, Reyes and Hertsgaard could not be more perfectly cast.  They were so honest and real that in their portrayal of these characters, that you will most likely be reminded of someone you know.

Karen Schmitt directs this comedy and hits all of the beats in staging multiple actors who are mostly moving around each other in a single set.  The spotlight monologues were presented with a wonderful depth as they lent insight to each character through-out the show.

Bravo to Lance Phillips-Martinez’s set design.  It was just the kind of set I would imagine, as these women sipped their cocktails and shared their heartwarming and hilarious stories.  Whether dressing up or hanging out, Michelle Mendoza’s costumes were spot on for these southern ladies. And kudo’s to the actresses for their seamless costume changes. 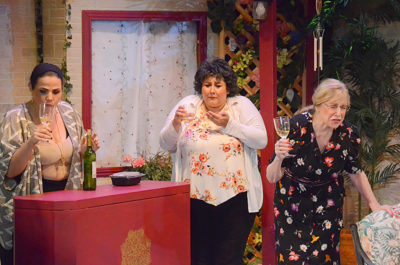 I’m a tough critic when it comes to comedy. I’m not a Three Stooges, ‘slap ‘em in the face with a pie,’ fan.  But if I had to pick one experience to top my list of favorite things to do, it’s laughing consistently and without restraint at well written and smartly delivered witty lines, and this show tickles the funny bone in all the right places.

“The Savannah Sipping Society,” can be seen through September 22nd, at The Indio Performing Arts Center, located at 45175 Fargo Street, Indio, CA.