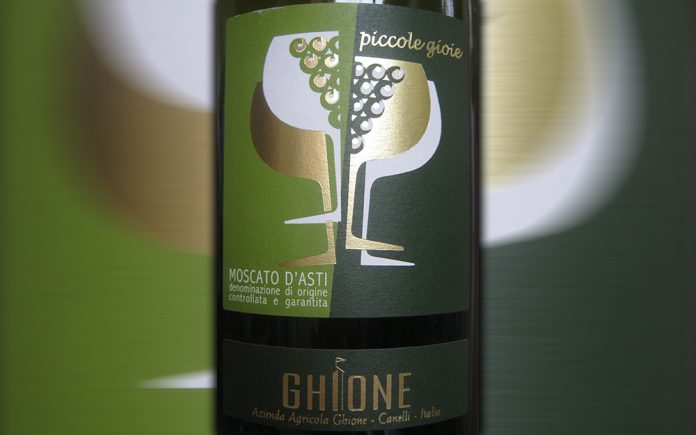 Just over the past few years, wine folk and consumers in general, looking for a sweeter, lighter bodied wine with a low alcohol content and a relatively low price point have found their contentment with Moscato D’Asti  The wine’s delicate notes, both fruity and floral, is perfect for the new wine enthusiasts on the scene.. And hooray for them!

And what about us old wine enthusiasts?  Well—those of us who’ve had the real deal Italian d’Asti, both vintage and recent, are surely fans as well.  Italian Moscato is one of the oldest, most versatile grape varietals in the world.  As with Spain with their Moscatel and France with their Muscat, (Americans call it Muscat as well), this is one venerable grape family.

This last summer, we spent some time in northern Italy’s Piedmont region. When this area comes to mind, we immediately think of the Nebbiolo of Barolo, Barbaresco, and Gattinara.  And goodness don’t we love these rich, powerful and complex wines!

And for all the prestige and mystique of those Nebbiolo wines, what has really driven the Piedmontese wine economy are the sweet white spumanti and frizzanti, made from moscato bianco grapes in the hills southeast of Asti

While staying at the wonderful Hotel LIS in the beautiful and quaint city of Asti, we also enjoyed a private wine tasting luncheon at a well-known restaurant nearby.  Meeting and dining with the Italian sommelier, he couldn’t hold back his pride nor his delicious array of vintage 1990s Moscato d’Asti.  Yes folks, the good stuff ages magnificently; and despite some wine snobbery about, good Italian Moscato d’Asti is fun, fruity, and is often surprisingly complex.

In the USA,, it’s pretty much newly produced stuff; and many of it is just so-so, but as some famous song writers chanted:  “It’s getting better all the time.” For a lot of wine lovers, (not particularly the millennials—but older quaffers) many remember the one-note sweet wine bottle of Asti Spumante that have turned them off to either the modern Asti or Moscato d’Asti.

If you’re game and so inclined, let’s have a quick discussion on the difference between the modern Asti (Spumante) and Moscato d’Asti, so to assist navigating between the two, should you wish a bottle to try—especially with spicy Asian food as we’ll mention below.

Fizzy wines or semi-sparkling wines—the Italian term is frizzante, have been around for ages when farmers tossed super-ripe grapes into open-topped wooden vats and let the grapes ferment naturally creating wines that were sweet, syrupy, oxidized and often fizzy.  In the cold weather the fermentation stopped—when it warmed again bigger bubbles started again.

Learning from this practice, with science in mind, producers of modern frizzante stop the fermentation by rapidly chilling the fermenting juice so that the yeast stops working.  This is how the wine retains its balance of natural bubble and residual sugar.

Vino Italiano states, “The main difference between a frizzante and a full-on spumante is that the fermentation of a frizzante is stopped earlier, usually at an alcohol content of between 4 and 6 percent.  At this level the fermentation has not yet gotten to a full boil, so the carbonation is gentler and the wine richer in sugar.  Conversely, a spumante is allowed to reach alcohol levels of up to about 9 percent before it is chilled down, creating a wine higher in alcohol, with more effervescence and less residual sugar.

“Technically speaking, an Asti Spumante should be crisper and more aromatic, and, a Moscato d’Asti softer, plumper, and sweeter.  But it doesn’t always work that way.  As with any wine, the best Asti Spumante and Moscato d’Asti are marked by balance—in this case, a balance of peach-and-apricot sweetness with a cleansing surge of acidity.”

And for all of us “dessert wine or sweet wine” enthusiasts, that’s the what’s it’s all about: we love the fruit sweetness complexities, but it has to be balanced with a fresh acidity to keep it interesting and non-cloying—as with French Sauternes, German Ice Wine, and Hungarian Tokaji.

Above, I’ve indicated “Asti” with “Spumante” in parenthesis.  What I’m referring to is in the early 1990s, Asti Spumante was promoted to DOCG classification, which is the highest designation in Italian wines—quite an achievement.  It was at that point, the wine officially dropped the word “spumante” to elevate the wine by getting rid of the suffix.

So now, when one looks at a bottle of Italian Asti, it’s the full-on boil of bubbles with crispness and complexities, where the Moscato d’Asti is soft with an easy effervescence. Look for Moscosto d’Asti brands by Basasiolo, Bricco Riella, or Gione.  Michele Chiarlo, whose “Nivole” bottling is one of the best and can be found around town.  I just tried the Cupcake Moscato d”Asti for kicks and it was just a one-note soda-type wine—just not comparable to the Italian stuff.  Risata wasn’t that impressive either.

For gatherings, a Moscato d’Asti and cheese combination is a classic Italian endeavor that never fails to impress—but you will want to pick cheeses that are light and fresh, rather than aggressively sharp and smelly. Your best bet will be gorgonzola or a crescenza. Top off with some fresh figs, grapes, nuts or whatever else sounds good and you’ve got the perfect party platter.

This column has always urged Asian cuisine restaurants to have some Moscato d’Asti on their wine list.  Vietnamese, Thai, Indonesian and Modern Fresh Chinese, all work really well with this wine. The high aromatic content of these regional cuisines balance out the natural sweetness in the wine.   Further, because the alcohol volume is so low, it pairs well alongside spicier dishes—the sweetness of Moscato is the perfect choice to balance out the spiciness of a dish such with ginger, cinnamon and hot chili peppers.