Allons-y! C’mon—let’s get going! And get ready for pure athleticism and emotion on clay!

True to my calling as your wine, food & tennis columnist, we are on our way to the French Open tennis tournament that takes place in the city of Paris at Roland Garros Stadium beginning on May 24th.

The two week French Open is the only Grand Slam event played on a clay surface.  Clay is the slowest tennis surface and thus makes for the most physically demanding matches.  Wimbledon is played on grass, the US and the Australian Open on hard courts.

The stadium is named after Roland Garros, a famous French pilot during WWI. He was the first pilot in history to shoot down another aircraft. Roland Garros also escaped a POW camp during the war, but was eventually shot down and killed in 1918.

And of course what the French Open also has going for it: French Wine!!  So what we’re going to do for the next couple of articles leading up to the tournament is to fashion a roadmap to some of Paris’ famed surrounding vineyards and regions in order to taste our way to the City of Lights.

The most apt and best way to start off our excursion is to venture into and enjoy Champagne.  This region is only 90 miles east of Paris.  Anyone who’s been to Paris and not gone to Champagne needs to get a new travel agent.  Almost all the famous champagne houses can be visited easily without a car, and there is a train station right in Charles de Gaulle airport, with regularly scheduled high-speed train service (TGV) that makes the non-stop run in as little as 31 minutes—it’s  quicker to get to Champagne from the Paris airport than to a hotel in Paris!

The fast TGV service, started a few years ago, has really been a big plus. The Champagne houses and wine producers continually encourage visitations and tours.  They wish to show wine lovers their craft, rather than just embracing the glamorous image. You should visit at least one of the big houses, Moet & Chandon, Veuve Clicquot, Taittinger or Ruinart. That’s an easy way to access it and get a general overview of production and tasting.

But don’t stop there – also visit at least one of the small producers in the villages where they make the wines from their own grapes.

The three Champagne grapes that dominate are Pinot Noir, Chardonnay, and Pinot Meunier.  And here are some terms we often see on the labels:

Cuvée: The cuvée is the base wine selected to make the Champagne. The most expensive Champagnes are made from cuvées from the best “Grand Cru” vineyards in the Champagne region.

Blanc de noirs literally means “white of blacks”.  It is a white wine produced entirely from “black grapes” (another name for red grapes, if you will), the Pinot Noir and Pinot Meunier.

Blanc de blancs  means “white of whites”, and is used to designate Champagnes made exclusively from Chardonnay grapes.

Rosé Champagne is produced either by leaving the clear juice of “black grapes” to macerate on its skins for a brief time or, more commonly, by adding a small amount of Pinot Noir red wine to the sparkling wine cuvée.

When it comes to describing the amount of sweetness in the wine, the terms used are the following:

For dry champagne: look for “brut” on the label. Brut should taste dry with no perception of sweetness.  This is the most common style of sparkling wine you’ll find in local stores.

For dry champagne that’s a little sweet, look for “extra dry” or “extra sec” on the label. Certainly a bit confusing when “extra dry” is sweeter than “brut”—but it is what it is.

For noticeably sweet champagne, look for “Sec”.  For even a sweeter wine, look for “Demi-Sec”.  And if you see “Doux” on the label, you know you’re knee-deep into sugar. 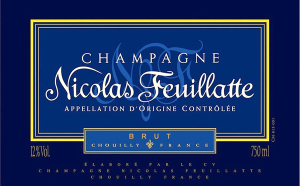 Back in the States, one of the best buys—“ever”—for a real French Champagne is the Nicolas Feuillatte Brut that sells for just above $30.  Wine Spectator gives is 92 points stating, “rich and creamy; dried fruit, nut and spice notes of fruitcake; lemon meringue, quince and honey flavors; clean citrusy acidity; elegant.”  Definitely the wine to be toasting to the likes of Nadal, Federer, and Djokovic when these tennis champs come on to the court!

Sparkling Champagne is undoubtedly the quaff of the region.  But let’s take a fun detour to the area of Bouzy—just 3 miles or so north of the Marne River.  Those in the know—and that now includes you—can sip on some delicious 100% Pinot Noir still wine that has been produced there for centuries.  The celebrated “Bouzy Rouge” is the best red wine you’ll find in the Champagne region and it was King Louis the Fourteenth’s favorite.

Next time, leaving Champagne, we’ll be heading south to the famed area of Chablis, which is just 110 miles southeast of Paris.

Anyone for tennis?  Culs Sec!—Bottoms up! Cheers!