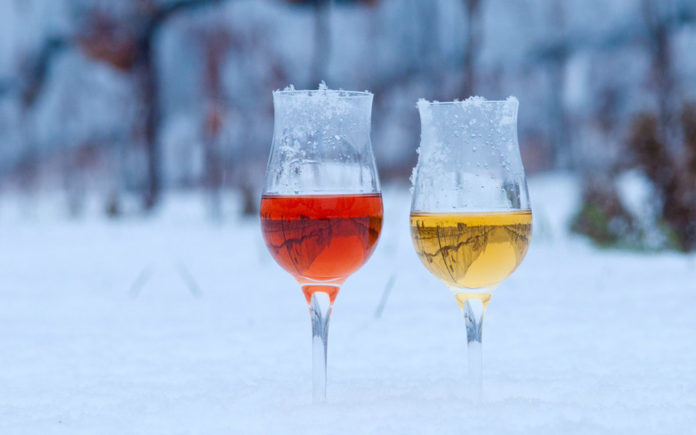 Although we desert dwellers are reasonably safe from crazy cold weather, every time the news reports the polar vortex phenomena sending freezing cold Arctic air southward across our country, I can’t stop myself from thinking about wonderful ice wine.

It’s been called one of the sweetest mistakes nature has ever made. Reason being, probably no one would have ever purposefully produced it.  The entire process of producing ice wine is very difficult.  Harvesting grapes is a tough job; doing so in sub-zero temperatures battling frostbite, in the dark, on a moments alert, and getting it all done before the next morning’s sunshine can be described as misery.

And, the game plan for such ice wine production is very iffy. One has to set out a certain amount of prized vines—those which could have produce a fine wine in October, but rather leaving the grapes hanging way into the winter shriveling away.  Birds are known to destroy entire crops. And the grapes can fall prey to a host of other dangers—wild boar, disease, mold, rain, wind or hail. Unseasonably warm winter weather can thwart an ice wine harvest completely.

But there is that hope that a quick evening cold frost, at just under 20 degrees Fahrenheit, will freeze the grapes immediately.  After that one-night painstaking harvest is accomplished, the thousands of hard icy marbles of frozen grapes are then brought to the winery and into a grape crusher and then into a grape press. As one could imagine at such point, many things can go wrong with machinery under the pressure of attempting to press the concentrated grape sugar syrup from those marbles!

But it is that juice—a touch of essence and a touch of frost—that is magic! And only about a tenth to a fifth of the sparse liquid in these frozen grapes is used for ice wine because the juice is so sweet.  Thereafter it can take anywhere from 3 to 6 months in a long slow, finicky fermentation to make ice wine. The final alcohol content will range from 7% to 10% and has almost double the sweetness of a Coca-Cola.

But never think is tastes like a Coke! Ice wine usually has a medium to full body, with a long lingering finish. The nose and palate is usually reminiscent of peach, pear, dried apricot, honey, citrus, figs, caramel, green apple. Further aromas of tropical and exotic fruits such as pineapple, mango, or litchi are also quite common.

But the most impressive thing is that while ice wines are extraordinarily sweet, they are balanced by laser-focused acidity exhibiting bright fruit essences—a great freshness!

I know there are so many of you vino lovers who consistently shun sweet wines.  However, a wine enthusiast must at least try an ice wine once in their life. Most folks, even those who especially hate “sweet wines” will become fans when they realize the bracing acidity keeps the experience fresh, alive, and exciting.

Germany and Canada—having early and cold winters in common, probably produce the best ice wines in the world and are the leading producers of traditional ice wines, but Austria, Switzerland and the United States, particularly Michigan and the Finger Lakes region of New York, also produce excellent wines.

My favorite region of ice wine production is in the Franken and Rheingau areas where the Germans have been perfecting the process and providing some brilliant and tasty eiswein.  “An ideal Eiswein is like a diamond.” says Rowell Hepp, managing director of Schloss Vollrads in Rheingau “Crystal clear, pristine, pure, cool—it’s the benchmark for which all other Eisweins are judged.”

My first ice wine romance involved a very rare 1986 bottle of wine made from shriveled but premium Riesling grapes that had hung on the vines until Christmas Eve where a quick and total freeze hit the vineyards.  All of the grapes were hand-harvested that night before the Christmas Day sunrise could threaten its incremental heat to thaw and ruin the fruit.

An ice wine makes a perfect aperitif; it’s great with soft cheeses; it’s a fun side quaff at the dinner table; and, of course, it’s one of the world’s best dessert wines capable of pairing with all of your sweet dishes. Bon Appétit & Cheers!

VALENTINES WINE DINNER ALERT:  I just received notice of an up-coming wine-pairing dinner that is to be held at both LG’s Prime Steakhouses locations in our valley.  The San Antonio Winery, which was established in 1917, is the featured winery.  They are well known around here due to the venerable winery in Los Angeles and their other winery tasting room location in Ontario.

San Antonio Winery is part of the Riboli Family Wine Estates who are blessed today to have four generations of family contributing to their success. Their vineyards are now located in Paso Robles, Monterey and Napa Valley and we are proud to be one of the most awarded wineries in California—indeed, they were recently voted the 2018 American Winery of the Year by Wine Enthusiast Magazine.  Their wine labels include: Stella Rosa, San Simeon, Maddelena, Opaque, and Riboli Family.