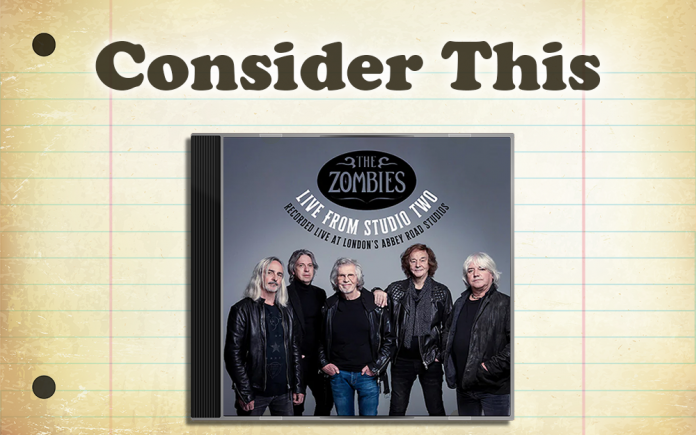 The Zombies, along with special guests Rooney, will be playing Pappy & Harriet’s on Thursday, July 21st. Although they were part of the British Invasion, the five-piece never achieved the superstar status afforded The Beatles, Rolling Stones or The Who. Nevertheless, along with The Animals, The Kinks, The Yardbirds, The Small Faces, The Hollies, The Dave Clark Five, Manfred Mann and The Troggs, they were an integral part of a vibrant scene that changed the trajectory of Rock & Roll forever.

Rod Argent and Colin Blunstone originally connected back in the 1961 in St. Albans, a suburb of Hertfordshire. With the addition of bassist Chris White, guitarist Paul Atkinson and drummer Hugh Grundy, they became The Zombies. They didn’t officially go professional until they entered a songwriting competition and won an opportunity to cut a demo for Decca Records.

Much like The Beatles and The Beach Boys, their sound was a heady brew of buoyant melodies, melancholy lyrics and gossamer harmonies. Only The Zombies salted the mix with Classical and Jazz influences. They became best-known for recording three chart-topping hits, “She’s Not There,” “Tell Her No,” and the epochal “Time Of The Season.”

Primarily a singles band, they only released two official long-players, 1965’s Begin Here (retitled The Zombies in the U.S.), and 1968’s Odessey And Oracle. Although the latter stiffed commercially upon release, in recent years it has been hailed a Psychedelic masterpiece on par with Sgt. Pepper. In fact, in 2012, it was ranked 100 on Rolling Stone’s 500 Greatest Albums Of All Time.

By 1969, The Zombies had disbanded, Colin embarked on a solo career while Rod Argent and Chris White founded the band Argent. But the Zombies torch never fully extinguished. As their hits continued to play on Oldies and then Classic Rock radio formats the music influenced a plethora of younger artists and bands, everybody from Jazz guitarist Pat Metheny to The Bangles, Tom Petty, The Jam, Dave Grohl and Matthew Sweet.

By the dawn of the 21st century, Rod and Colin reunited and began touring as Colin Blunstone And Rod Argent. Soon after a new iteration of The Zombies was born. Sadly, Paul Atkinson passed away in 2004, the same year the band released As Far As I Can See, their first album of new material in decades. Two more new ones followed, Breathe Out, Breathe In in 2011 and Still Got That Hunger in 2015. Two years later, the surviving members reconvened to celebrate the 50th anniversary of the recording of Odessey And Oracle. Finally, in 2019 they were inducted into The Rock & Roll Hall Of Fame.

The set kicks into gear with three tracks off The Zombies’ most recent long-player, 2015’s Still Got That Hunger. “Moving On” simply crackles with authority. A Blustery Blues-Rocker powered by brawny guitars, brittle bass lines, ticklish keys and walloping big beat. Rod and Colin’s choirboy harmonies are still on point, even as time signatures shift, hugging the melody’s hairpin turns. Insistent lyrics like “I’m moving on from this place of confusion, it’s goodbye to trouble I’m leaving behind/In my life no more grieving or sorrow, won’t allow the darkness my soul to define,” refuse to wallow in the mire. Rod unspools a Jazzy piano solo on the break, that is nearly eclipsed by Tom’s incendiary guitar licks.

Angular and angsty, “I Want You Back Again,” was originally a single, released after their first two singles cruised to the Top 10 on both sides of the pond. Surprisingly, the single eked out a position in the Top 100. In 2015, the guys took another run at it. The live take cribs liberally from both versions. Jittery and Jazzy, modal piano runs collide with squirrely/squally guitar, sylphlike bass and a strafing beat. Rod’s demeanor is urgent and agitated as he insists he be given one more chance; “Since you have left me, I’m all alone, I need your help, I can’t stand on my own, I want you back.” Rod uncoils an elegant piano solo on the break that evokes Jazz giants like Bill Evans, Paul Desmond and Vince Guaraldi. Sleek and shiny guitars ascend locking into a labyrinthine groove.

“Edge Of The Rainbow” from the same record, executes a stylistic 180 and sticks the landing. It opens with churchy keys, barbed guitars and plaintive vocals. It lands somewhere between Doo-Wop, Gospel and torchy lamentation. Lyrics speak to the same mid-life conundrum as the opening cut; “Cause into each life a little rain must fall, I just know there’s just too much in mine, you’ve got to be strong, keep movin’ on and know there’s something better waiting down the line. This one Soulful and sanctified, without ever becoming syrupy or mawkish. Within the 18-song set, the band preview several songs from their upcoming album, they include the swoony “Different Game,” the piano-driven “Runaway,” the Classically-tinged “I Want To Fly,” and the heartfelt ballad “You Could Be My Love.” They also incorporate “Say You Don’t Mind” from Colin’s 1971 solo effort and Argent’s “Hold Your Head Up.” The former is anchored by sprightly electric piano, chunky power chords, loose-limbed bass, jaunty handclaps and a hi-hat kick. A Bluesy shuffle, the lyrics split the difference between a desperate mea culpa and a sad-sack pity party; “Well, it gets so bad that a door mat sees better times, there’s time to get back and think up some better line, I’ve been doing some growing, but I’m scared of you going, so say you don’t mind, you don’t mind, you’ll let me off this time, you’ll let me off this time.”

The latter was a surprising Top 5 hit and remains a staple on Classic Rock radio 50 years later. It’s appeal is still indelible, a timeless and anthemic head-banger (even Pearl Jam slightly reconfigured the chord changes for the chorus of their breakthrough hit, “Jeremy”). Live, The Zombies pull out all the stops. Hammond B3 is front and center, latticing atop Rod’s roaring vocals, crunchy guitars, rubbery bass lines and a four-on-the-floor thunk-a-thunk beat. The band stretches out, each member taking a turn in the spotlight, from the lengthy, ooky-spooky organ, which integrates snatches of Bach’s “Jesu, Joy Of Man’s Desiring,” to the Tom’s crisp guitar attack, Soren’s tensile bass and Steve’s thundering tribal tattoo. Clocking in at just over 12 minutes, it’s the album’s tour de force. Of course, the best songs here are their ‘60s classics, they start at the very beginning (which, as Julie Andrews and The Sound Of Music remind us, is a very good place to start). The iconic wash of Hammond B3 immediately dovetails with fuzz-crusted guitars, roiling bass lines and a whipcrack beat on “She’s Not There.” Aggrieved lyrics limn a sad-sack saga of betrayal and romantic treachery; “Well, let me tell you about the way she looked, the ways she acted the color of her hair, her voice was soft and cool, her eyes were clear and bright, but she’s not there.” The B3 simply levitates on the break, buttressed by bee-stung banshee guitars Daytripper bass lines and a blitzkrieg beat.

Although “I Love You” was only a B-side to the 1965 single “Whenever You’re Ready,” it’s managed to attain classic status through the years. Slashing guitars are matched by search and destroy bass, spiky keys and a stuttery beat. Stentorian vocals belie the lyrics’ diffident demeanor; “I love you, I love you, but the words won’t come, and I don’t know what to say/If I can find the words in my mind, the words could explain, but the words won’t come, if you can see what you mean to me, my words should explain…and oh how hard I try to tell you I love you, but something holds me back when I try to tell you.” On the break rippling keys underscore this urgent, albeit inarticulate proclamation.

Meanwhile, “Tell Her No” simply fizzes and pops. Staccato guitars brush up against stabbing keys, snappy bass lines and a rattle-trap beat. Lyrics offer a cautionary tale about a wanton Jezebel who is “the kind of girl who’d throw my love away, but I love her so, don’t hurt me now, don’t hurt me now/And if she should tell you ‘I love you,’ just remember she said that to me.”

Finally, there are three prime cuts from their masterpiece, Odessey And Oracle. Both “Care Of Cell Block 44” and “This Will Be Our Year” are equal parts sunny and elegiac. “Care…” wraps cheerful piano chords, lithe guitar licks and sturdy bass around a tick-tock beat. The honeyed choirboy harmonies on the chorus are majestic and bespoke. Stinging guitar riffs shadow the vocals on the bridge adding some grit to this beatific gem.

Finally, they offer up their magnum opus, “Time Of The Season.” Spectral keys are bookended by skittery guitars, sinister bass and a cantilevered beat. The opening verses are sly and seductive; “It’s the time of the season when love runs high, in this time give it to me easy, and let me try with pleasured hands/To take you to the sun, to promised lands, to show you every one, it’s the time of the season for loving.” Serpentine B3 notes slither through the mix, amping up the erotic frisson as Colin drily demands to know “What’s your name, who’s your daddy, is he rich like me, has he taken any time to show you what you need to live?” Apparently not.

Other interesting tracks include the propulsive “I Want Her She Wants Me,” and brisk “Merry Go Round.” The closer reaches all the way back to the Begin Here album with “The Way I Feel Inside.” Colin’s voice soars, accompanied only by piano as he unspools this tentative and heartfelt declaration of love. It’s a poignant end to a great show.

Along with The Stones and The Who, The Zombies are the only band from the British Invasion still touring and creating new music. Sixty years on, they’ve still got the goods. (The Zombies, with special guest Rooney at Pappy & Harriet’s Thursday, July 21st, 2022. 6pm Doors/8pm Show. Indoor show. All ages. pappyandharriets.com)