Marvin Etzioni and Willie Aron have known each other nearly 40 years. They met at Aron’s Records in 1978. A Los Angeles institution, Aron’s opened on Melrose Avenue in 1965 across the street from Fairfax High School. A mecca for music lovers, it lasted 40 years closing in 2005.

Willie was a 15 year old kid cutting class (um, spending his lunch break) with his friends, record shopping. Although they could clearly hear the school bell ringing, Willie insisted they couldn’t leave until the Who’s Live At Leeds record finished playing.  The clerk nodded in agreement, adding “now there’s someone who likes good music!” That clerk was Marvin.

To paraphrase “Casablanca,” it was the beginning of a beautiful friendship. The pair began hanging out, playing and singing together.  Marvin produced the demo for Willie’s first band, Blue Monday. A few years later, after Willie, Jeff Davis, Steve Wagner and Robert Blackmon formed The Balancing Act, Marvin produced that demo too.

By the early ‘80s, Marvin was already a battle-scarred veteran of the record industry, having endured several disappointing experiences and false starts.  He started off playing in bands with names like Prudence Goodbody and Model.  More recently, he had begun performing solo gigs around town.  It was then that he became acquainted with Ryan Hedgecock and Maria McKee. Struck by their talent, he mentored the pair for a bit before recruiting drummer Don Heffington and forming the band Lone Justice.

By 1984, a huge buzz surrounded Lone Justice. They also had some pretty high profile fans; Bob Dylan, Dolly Parton, Linda Ronstadt, Tom Petty and assorted Heartbreakers. Signed to Geffen Records, their self-titled debut garnered rave reviews, in fact, they were hand-picked by U2 to open their Unforgettable Fire tour.

Their sound was a years ahead of the curve, a Country/Rock amalgam, built around Maria McKee’s powerhouse vocals.  They truly foreshadowed the alt.country movement that would take flight in the early ‘90s.  Sadly, none of the critical good will translated into sales and the original line-up disintegrated after one album.

Meanwhile, Willie’s band the Balancing Act were kind of in the same boat. Between 1986 and 1988 they released an EP, (produced by Plimsouls front-man Peter Case), signed with IRS Records (home to R.E.M., the Go-Go’s and the Cramps), and recorded two well-received long-players, Three Squares And A Roof, and Curtains. Despite excellent reviews and exhaustive touring, the four-piece never gained any nationwide traction. Slightly dejected, they quietly disbanded before the turn of the decade.

Through the years Marvin and Willie collaborated on a plethora of projects, but they never really contemplated recording an album from scratch until their Rabbi made an off-hand remark that really resonated. Greeting the pair at Temple services, Rabbi Finley jokingly referred to them as the Holy Brothers, the sobriquet stuck.   Traveling Wilbury-style,  they adopted the first names of Buddy (Marvin)  and Johnny B. (Willie) as an homage to  Rock N’ Roll progenitors Buddy Holly and Johnny Ace. They prefaced Holy Brothers with “Thee” as a tribute to East L.A. music legends Thee Midnighters. 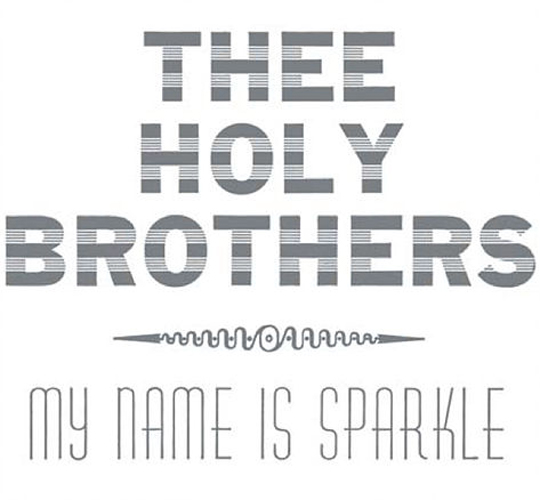 After a lengthy gestation period, the album My Name Is Sparkle was born. Initially, the pair hoped to emulate their idols, Simon & Garfunkel, (the Bookends album is a mutual obsession), but Marvin’s songs began to take a life of theirof their own, addressing the ever-humbling topic of spirituality.  Nine songs are presented in two Acts.

The album kicks into gear with “Elvis In Jerusalem.”  The listener is greeted with sinewy wah-wah guitar, spiky horns and   snaky rhythms.  The lyrics humorously conflate the King of Rock N’ Roll with the King Of Kings.  Waiting in vain at the Wailing Wall, which deity will arrive? “I just want to see his smile, just like a little boy/Walk a hallelujah mile, just to hear his voice.”

The title track is next.  Anchored by staccato hand-claps, shaker percussion and Who-ish power chords, the melody is bare-bones and almost utilitarian, allowing the listener to focus on this sharply drawn quest for meaning.  Sparkle seeks divinity in the everyday;   “are you hiding in a church, are you a leaf on a tree/Are you a mother giving birth, are you the father I can believe?”

The most buoyant song on the album celebrates the biological imperative. “Woman Needs Man, Man Needs Woman” is a lighthearted boogaloo that blends the Afro-Funk of Willie Bobo with the Jamaican Folk of Harry Belafonte, plus a hint of The Champs’ “Tequila.” The melody is powered by a chunky backbeat, stinging guitar and call-and-response horns that swivel and swirl, turning on a dime. Marvin recites the song’s penultimate line, “it’s better to be alone with a woman and talk about God than to be alone with God and talk about a woman,” with the timing of a Borscht Belt comic.

Slow and stately, “If God Let Go” is buttressed by pensive guitar, piano, bass clarinet and pedal steel. A bleak scenario is predicted…“would it all come apart, would it always be dark?” But as the instrumentation builds and the vocals merge equal parts Gospel and Beatlesque, it belies the doom and gloom.

The most harrowing track here, “A Sudden Gunshot” comes at the album’s mid-point, closing out Act One.  The melody shares musical gravitas with two Simon & Garfunkel classics, “Old Friends” and “7 O’Clock News/Silent Night.”

The tune opens with sweetly tinkling piano, pastoral guitar and sawing autoharp.  A snare drum locks into a martial cadence, slowly ratcheting up the tension.  With a few sharply turned phrases, Marvin sketches out a desolate and desperate scenario of an anonymous man contemplating suicide; “His back was breaking from the weight of the world, the seasons wouldn’t  change and the tables wouldn’t turn/Only so many feelings can live locked up in a man, everyone cares when it’s too late to understand.”

Act Two opens on a more hopeful note.  The shapeshifter melody of “Let The Great World Spin” is a tart fusion of New Orleans Second Line and traditional Klezmer music. Rollicking and exuberant, the instrumentation is a heady brew of guitar, mandolin, tuba, trombone, tambourine and a slap-back beat. It’s a laissez faire moment that offers some sweet respite.  “I don’t know earth from sky, I don’t know when I’ll die/ I don’t know why doves cry, let the great world spin.”

Bluesy and shambolic, “Glad It’s Gonna Rain” is accented by kick-drum rhythms, stuttery mandolin, gutbucket guitar and wheezy harmonica runs. The melody feels like a sly homage to Blues legend Jimmy Reed. The rain has a cleansing and salubrious effect, even as we contemplate the life’s great intangibles, the sun will still shine and the rain will still pour.

“Divine Love” brings Sparkle’s journey full-circle. A slow burn melody is propelled by off-kilter beat, muted chamberlain, intricate mandolin and tin box music toy.  Here Sparkle, (whose gender is purposely left ambiguous), speaks directly to God. “Everywhere is where You are, You are always in my life/What I feel in my heart, makes me want to cry.”

The album closes with “Keep Crushing Me.”  Here Marvin and Willie’s vocals fully intertwine wrapping the spare melody in a fraternal embrace.  Accompanied by stark acoustic guitar notes, the lyrics explicitly acknowledge that spiritual grace is often meted out through struggle. “If there’s a rock that’s crushing me, but if it’s You God, if it is You God, if it is You God/Keep crushing me.” That is the great epiphany of this song cycle, faith is forged through adversity.

My Name Is Sparkle is an ambitious experiment that truly works, integrating the secular and spiritual. There are aspirations to create a stage production, but those plans have yet to be fleshed out. In the meantime, the Holy Brothers have fashioned an album that echoes devotional touchstones like George Harrison’s All Things Must Pass and Pete Townshend’s Who Came First.