It’s easy to make fun of the guy who is running around a stage screaming and yelling, jumping up and down and making Bill Gramatica’s celebratory hamstring pull look graceful.

If you search “Steve Ballmer” on YouTube there is a plethora of videos featuring his goofy, fast-paced sales pitches, teary speeches or downright absurdness on full display. And for most major sports owners who like to remain in the background writing huge checks while cashing their huger checks, these displays might seem outlandish, embarrassing or questionable. 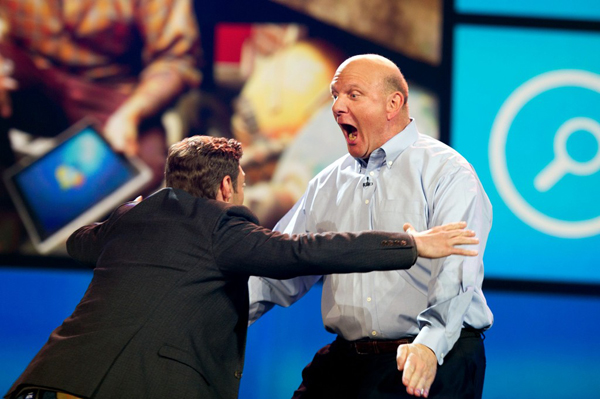 But for a sports fan, when it’s the team you’re most passionate about, THIS IS YOUR GUY.

Ballmer is going to make anyone who is NOT a Clippers fan wish he were their owner. He’s not graceful, not tactful, not experienced and he’s certainly not shy.

This is a man who helped Microsoft become a global juggernaut with his irreverent humor and revolutionary marketing tactics.

In the business world there were questions swirling around his tenure as Microsoft CEO:

a) He reorganized the company and that left some engineers to seek employment elsewhere.

b) He overpaid for Nokia, a dying company that never proved to be a profitable deal.

c) He was extraordinarily vocal about brainwashing his children to disavow Apple and Google products and even more vocal about his disdain for his competitors’ leadership.

But don’t let those reported misgivings dissuade your evaluations of his capabilities in the sports world. Those same knocks in the business world are evidence he’ll make a fantastic NBA owner:

a) He’ll actually organize the Clippers. Donald Sterling was notoriously absent as an owner and communication through the organization struggled mightily. It will likely take some getting use to, but a refreshing reorganization could invigorate employees who’ve been with the Clippers for years trying to make sense of senselessness. Or Ballmer will simply bring in fresh, innovative minds to make the Clippers a marketing machine.

b) He’s overpaid for the Clippers. By about 4 times. This is a man who gets what he wants and will fork over the dough to secure it. Know who LOVES to hear that? NBA free agents. Get a new owner who’s signing blank checks and talent will flock to the blue and red side of Staples Center while the purple and gold locker room remains a sad cellar for B-level talent.

c) As vocal as he is about his disdain for the competition in tech, that is a world that has its own intellectual spats, but sports are all about competition and exerting your will over the opponent. Ballmer already has the mindset oozing from every pore. He’ll insure the mental toughness the Clippers had been lacking for years under Donald Sterling is apparent and celebrated appropriately.

When Ballmer first became the front runner to the Clippers ownership, after watching the YouTube videos, I said on my radio show, “Buehler’s Day Off”, that Ballmer was just a rich nerd trying to be one of the cool guys and using his money to buy his way to being cool. And maybe some of that is still true. But the more I learn about his, the more I believe I was wrong.

He’s a unique, eccentric, enthusiastic individual who is flawed, passionate, irreverent and reckless at times. And he’s exactly the type of owner every passionate sports fan would love to have running their team.

Julie Buehler hosts the Coachella Valley’s most popular sports talk radio show, “Buehler’s Day Off” every day from 3-6 on 1010 KXPS, the valley’s all sports station. She can also be seen every morning between 6-7am on KMIR sharing the coolest stories in sports. She’s an avid gym rat, slightly sarcastic and more likely to recite Steve Young’s career passing stats than American Idol winners. Tune in M-F 3-6 pst at www.team1010.com or watch “Buehler’s Day Off” on Ustream and KMIR.com for her sports reports.