Sincere and cynical cinema for the season

Christmas movies are a self-perpetuating industry that never fills the gaping maw of its assumed audience.  Mostly drivel, these sickly-sweet, smarmy or thuddingly unfunny narratives would-be farcical productions crowd the cable and streaming calendar this time of year.  But every once in a while, a holiday themed movie breaks through and connects with a greater truth that resonates with an audience no matter how many times it has been viewed.

If you’re already familiar with great family fare that includes “NATIONAL LAMPOON’S CHRISTMAS VACATION,” “A CHRISTMAS STORY,” “MIRACLE ON 34th STREET,” and of course the ritualized liturgy of family gatherings to pay homage to “IT’S A WONDERFUL LIFE,” (now availkable in a beautiful hi-def Blu-ray transfer from Paramoubt) here are some additional titles that might fit your Christmas mood – whether cynical or sincere. 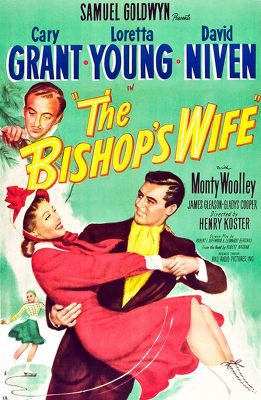 “Do not forget to entertain strangers, for some people have entertained angels without knowing it.” Hebrews 13:2

Cary Grant is Dudley, an angel sent down as a result of the prayers of new bishop David Niven in 1947’s sly and wise treat from MGM.

So caught up in trying to raise funds to build a new cathedral, the bishop neglects his beautiful, devoted wife, a doe-eyed Loretta Young.

The obviously tempted Dudley shows the bishop’s wife how to celebrate the precious, passing moments and the bishop learns the greatest lesson of all.

The world’s three great religions incorporate angels as real, created entities, messengers between the world of mortals and God. And movies about angels, both good and bad, will always be messengers of film entertainment. This exceptional black and white title about a very good angel is worthy of your time.

Incidentally, when Sam Goldwyn got a look at the initial production footage, he hated what he saw.  Fired director William Seiter, had switched the roles of Niven and Grant, hired Henry Koster to direct and voila! a sublime classic was created.  Highly recommended.  Black & White full frame.) 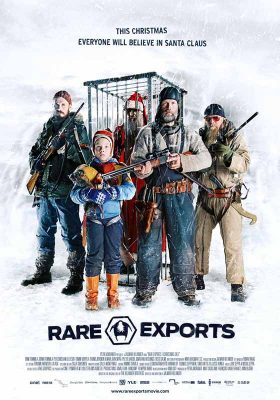 This strange, sometimes horrifying Christmas tale is set in the frozen wastes of Finland where local reindeer herders battle an ancient, mythic but newly manifest evil: Santa Claus. Yes, THE Santa!  But it’s his vast army of vicious brutish, elfish “helpers” that must be killed — or tamed.

Single father Rauno (Jorma Tommila) and his young son, Pietari (Onni Tommila) must sort out a truth for themselves that will ensure their future.  This disturbing, regional folktale made real is unlike any so-called Christmas movie you have seen.

Incredibly bizarre, this vintage public domain film widely copied and resold is in terrible condition.  Spices, dirt, faded color, bad sound and so on.  But that only adds to the ambient power of this demented foray into the fragmented Clausian mythos.  Although there is a plot, the title pretty much says it all.  It seems that Martians are upset because their children have been watching TV broadcasts from earth and have learned about Santa Claus.  Of course, everyone knows there’s only one Santa, so the Martians come to earth and kidnap two kids who lead them to the North Pole.

There, the Martians kidnap Santa and the kids and return to Mars.  A bunch of stuff happens on the trip to Mars and after they get there.  Bla bla bla.  Suffice it to say, the Gospel of Santa does eventually reach Mars.

But here’s what makes this movie a masterpiece for me.  I turn off the sound and play the opening of Wagner’s “Ring” very loud.  And then I found “The Three Penny Ring Cycle” by Les Grooms.  This is an 80 minute reduction of Wagner’s massive 17 hour opera and if fits perfectly the length of SCCTM.  The resulting experience is surreal in the extreme, it works even better the worse quality of your DVD transfer.  Be sure to turn up the contrast ratio and set the picture to “vivid.”  Beware.

“MARCH OF THE WOODEN SOLDIERS” 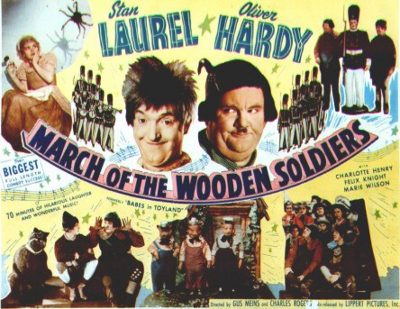 On the far end of the musical movie spectrum is the colorized Laurel and Hardy “March of the Wooden Soldiers.”

Dum (Stan) and Dee (Ollie) are Santa’s toymakers preparing for the big delivery on Christmas eve. Mother Goose and nursery rhyme characters are all over the place and Stan and Ollie are in constant trouble (“Is that 100 six-foot toy soldiers or 600 one-footers?”) Silas Barnaby, (remember “the meanest man in town”?), Bo Peep (she’s being forced into marriage by Silas or he will evict Bo’s mom, who is in fact The Old Woman In The Shoe). And there’s Tom Tom the Piper’s Son (Ms Peep’s true love) and the big finale with the creepy attack of the Bogeymen.

This classic has been cleaned up, digitally remastered and colorized and looks about as perfect as the best of old style children’s book illustrations and I bet Stan Laurel and Oliver Hardy themselves would want this one colorized.  Stan even said he regretted they couldn’t shoot this in color.  It’s certainly no sacrilege. This is one beautiful, Fauvistic fever dream of a movie; a weirdly mesmerizing treat.

Laurel and Hardy forever! Let’s all love each other, OK?

For those who dare to read between the lines (or movie frames), this film can be seen as a subversive horror fest that plumbs deeply disturbing psychological and political issues not touched on in contemporary films. I am amazed that someone hasn’t examined this in detail and I have often wondered how much of it may have been intentional — perhaps from the brilliantly demented mind of Stan Laurel. Only on the surface is this a children’s movie.

John McCabe mentions in his liner notes to the soundtrack LP that Stan felt Babes in Toyland had more consistent entertainment values than any of their films, and his one regret was that it hadn’t been made in color.  Three-strip Technicolor was still a year or so in the future in 1934. 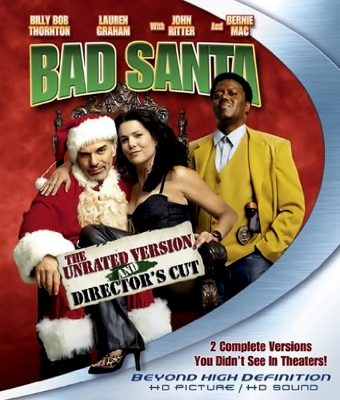 There are currently three different versions of Bad Santa available: the 93-minute theatrical cut, the 98-minute “Badder Santa” (Unrated) edition, and the newer 88-minute Director’s Cut. The changes are slight and only affect the tone of the film.

Not everyone’s cup of tea, this brilliant film about an alcoholic criminal and his midget partner-in-crime has an unfiltered look at life on the dark edge of the manufactured holiday that celebrates Christ’s birth.  It is not only an unblinking look at the business of Christmas, but also showcases the unexpected and ironic unconditional love of a misfit kid who still yearns for a real Santa even if he’s a reprobate fraud at death’s door.

Billy Bob Thornton is Santa, Lauren Graham is his girlfriend (she likes men in uniform), the late John Ritter is a befuddled store manager and the late Bernie Mac is a dubious store detective.  The late Tony Cox is a little person elf partner of Thornton.

But it is Brett Kelly who will break your heart as the bullied fat kid who still believes in the goodness of a real Santa in spite of all the evidence to the contrary.

The story came from the Coen brothers and Terry Zwigoff directed with a very sure hand and a clear vision.

I love this near-perfect film with its profound and timeless message of love for the unlovable. Here is the ultimate American Christmas movie and should be required viewing for all those who are sick of the forced gaiety and obligations of the holidays.  Times are tough enough.  (Director’s cut: Not rated.

Merry Christmas.  God bless us one and all.