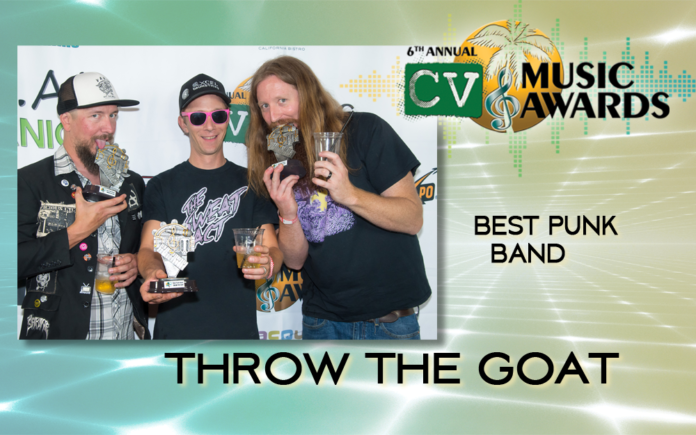 Throw the Goat is a power punk trio that has released four CDs and most recently The Joke’s On Us earlier this year. In June they won the CV Music Award for Best Punk Band. They are: Brian ‘Puke’ Parnell on guitar and vocals, Troy Whitford on drums and Michael Schnalzer on bass and lead vocals. They will be performing at the Idyllwild Strong Benefit this weekend, the Concert for Autism benefit in October and at Stickyfest November 10. The guys took some time to talk with CV Weekly.

CVW: You did a lot of touring last year across the US and in Europe and this year you’ve done a lot of shows to promote The Joke’s On Us. Tell us about some of your recent shows that are standouts for you?

Puke: “Warped Tour was definitely a highlight of the year so far. I usually don’t pat us on the back very often, but we really killed it. I had a feeling we were festival-ready but had no idea we’d crush it like that, right out of the gate.”

MIKE: “One of the coolest things about playing shows, aside from getting to scream my guts out, is getting to share the stage with so many other super talented bands. Our show last month at The Doll Hut in Anaheim was a whole day full of kick ass bands like Dirty Hammer, Damaged and The Yeastie Boys.”

Troy: “Actually, we haven’t really toured since our “Alternative Facts Tour” in the spring of last year (2017), but we’ve been keeping busy in 2018. January 25th was our CD Release Show at The Doll Hut in Anaheim CA, which turn out to be a great success. We did a small 3 day tour in Feb with ‘The Sleeping Sea Kings’ from Riverside CA. We hit Las Vegas, Ventura, & Riverside, and had a good time kicking ass with those guys. Since then we’ve been playing a couple shows a month around San Diego, LA, Palm Desert, Riverside, Anaheim, & San Bernardino. In May, we got on a plane to Costa Rica to play with Agent Orange. Had the time of our lives of course, made some new good friends, and lived Pura Vida all week. We intend to go back ASAP.”

CVW: What is your tour schedule like for the rest of 2018?

Puke: “We’ve had some setbacks this year and haven’t done as many shows as we planned. So we’re getting ready to remedy that before the year’s done.”

Troy: “We play August 20th in Santa Barbara with a few rad bands including Palm Desert’s very own Mega Sun. The show was put together by Mikey Doling of JaxxRock Entertainment. After that we head to The Doll Hut in Anaheim as direct support for Guttermouth. September we play in Yucca with Sticky Doll & Instigator followed by a show at The Hood on September 21st for Sleazy Cortez’s Music Video Premiere, and Oct 12th back at The Hood with Se7en4 & Mega Sun. We always have the honor to play the Autism Benefit, which is on October 19th and 20th. Then we hit The Viper Room with D.R.I. on October 23rd, and finally we play Stickyfest November 10th. So yeah, we’re doing our best to stay busy and productive.”

CVW: Tell us about playing Stickyfest?

Puke: “The Palms is such a cool spot, someone just had to do a festival there at some point. I’m glad Greg from Sticky Doll was able to put it together. The lineup is awesome and we’re stoked to be one of the top bands performing.”

MIKE: “I love playing at the Palms. It’s out in the middle of nowhere on the way to Amboy, and the outdoor stage makes me feel like I could get abducted by aliens in the middle of the set.”

Troy: “It’s an outdoor Punk/Metal/Alt Music Festival in 29 Palms at Palms Restaurant, brought together by Greg of the band Sticky Doll. About 12 awesome bands will play all day and all night, all ages, free camping, great food, cheap drinks, and just an overall good time.”

Puke: “Personally, I think 2019 is when we finally get out and tour places like Japan, Australia and Europe proper. There’s also new music in the works. Never stop writing!”

CVW: Are you working on new material?

MIKE: “There’s always ideas floating around, the trick is to always hit the record button.”

Troy: “For me, yes. Mike & Puke have an arsenal of songs that I haven’t learned yet, so we’re going back to get some of the TTG oldies tight.”

Puke: “It usually involves a lot of beer. Sometimes it’s completely spontaneous, sometimes it’s more-or-less a full song that everyone kinda learns and riffs on, sometimes it’s just a basic idea that gets hashed out into a finished song. But there’s always beer.”

MIKE: “Super collaborative, until I tell everybody that they’re playing it wrong.”

Puke: “I know this is cliche, but basically all of them make me proud. Pulling it off live makes me even prouder.”

MIKE: “‘Shackles and Wings.’ Singing that song keeps me from giving most people the finger these days.”

Puke: “We’ve been dusting off some older songs that are super fun to play with Troy. But from the current set list I really like the silly ones like “Beef” and “Utah.” When the energy comes back at you from the crowd, it makes playing everything enjoyable.”

MIKE: “‘Havin’ A Beer’ will always make me smile and dance a jig.”

Puke: “Dirty punk rock basement shows. Big stages with all the lights and awesome sound are fun, but we’re just a three piece and all that space feels weird. You lose the connection with the other band mates.”

MIKE: “The Hood and The Doll Hut in Anaheim. Small and sweaty sanctuaries.”

Troy: “The Doll Hut in Anaheim have been so good to us, we love Big Mac & the seen out there. Brick By Brick in San Diego is pretty rad as well as The Viper Room in LA.”

Puke: “What a lot of people don’t realize is the butterfly effect of being in a band. Every little thing that happens will affect your career in some way. Which is why it’s important to have the best band etiquette, never burn bridges, never act like some asshole rock star to anyone, no matter how low on the totem you think they might be. That person you just treated like shit could one day be the gatekeeper between you and a successful career. Guess who they’re not gonna want to work with? The asshole who thinks they’re a rock star. Be humble. Be nice.”

MIKE: “Realizing that if you don’t absolutely need to play in a band, and I mean need it like you need blood in your veins, then you should probably just save your money.”

Puke: “Only the top 1% of artists are the ones bringing in the streaming money, the ones who are household names. That kind of “success” isn’t realistic for most of us. If you can do what you love and still love doing it for years and years, there’s nothing more satisfying for the soul. That feels like success to me.”

MIKE: “A friend of our brother-in-law teaches 3rd grade out in Orange County, and sent him a picture of one of his students wearing a TTG shirt. The one with us at a bar in hell and the bartender is slitting his wrists and pouring us shots of hit blood. We still have no idea whose kid that was, but that was a crowning moment for me.

MIKE: “I get influenced by all the great bands we play with, and try to match their energy. A band like Sleazy Cortez just makes me want to play better, or at least leave blood on the stage.”

Troy: “Anyone who strives for what they love no matter how high the odds are stacked against them or the lack of attention they don’t get. That’s influential to me; I always root for the Underdog.”

Puke: “I’ve been listening to the new 5th Town album a lot. Oh, wait… you haven’t heard it yet? Don’t worry, it’ll be done soon.”

MIKE: “It’s been a Morphine kind of month so far.”

Puke: “If we got an opening gig for The Bronx I would shit myself.”

MIKE: “The Bronx and The Shrine.”

Puke: “I’ve got a lot of respect for Steve Rennie. That is one smart dude right there. He was basically a mentor of sorts for Throw The Goat in the early days.”

MIKE: “Dave Grohl. The guy just put out a 23 minute instrumental song that I actually sat all the way through.”

MIKE: “Recouping recording/manufacturing costs due to the devaluing of music in general.”

Puke: “Willie Nelson, Hank III and I guess a hologram of Johnny Cash.”

CVW: What did it mean for you to win the CV Music Award for Best Punk Band this year?

Puke: “It was amazing! And that crowd during our performance. That was the most well-dressed mosh pit I’ve ever seen.”

MIKE: “Amazing honor from an amazing scene, and validation that we are more punk than metal.”

Troy: “I was surprised. It was so unexpected for me that I missed the announcement because I was smoking upstairs. It’s always nice to be recognized & win something, and I thank everyone for their continued support…you were waiting for a BUT right? Lol, you don’t get one. Lol. We love you all!”

CVW: Where can fans buy your music?

Puke: “Anyone in the desert who wants a 12” vinyl copy of The Joke’s On Us can hit up the Record Alley in the mall in PD. Everyone else can go to throwthegoat.net.”