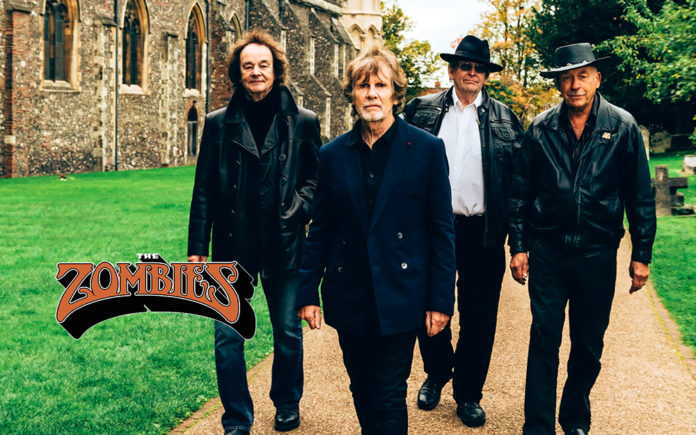 When The Zombies recorded “This Will Be Our Year” for their seminal 1968 album Odessey & Oracle, they couldn’t have foreseen that their most successful year as a band would be 2019. In March, the British pop legends were finally inducted into the Rock and Roll Hall of Fame (alongside Stevie Nicks, Radiohead, The Cure, Def Leppard, Janet Jackson, and Roxy Music), and this summer they’re on the road with Brian Wilson for the Something Great From ’68 and More tour, which makes its way to Fantasy Springs Resort Casino on Sunday, September 1st at 8 p.m.

Known for their shimmering vocals and bluesy keyboards, the band will play Odessey & Oracle in its entirety, plus classic hits such as “Time of the Season,” “She’s Not There,” “Tell Her No,” and “She’s Coming Home.” In a recent interview, lead singer Colin Blunstone talked about the group’s early days and how their signature sound evolved.

FELCI: You have one of the most unique voices in pop music, alternately described as “breathy” and “smoke-silked.” How did your vocal technique develop and who were your influences as a singer?

BLUNSTONE: “Like many other musicians of my era, early influences included the original greats of rock ’n’ roll: Elvis, Chuck Berry and Little Richard. Over the years, [keyboardist and songwriter] Rod Argent has shown me so much about phrasing as we have worked on songs together. Rod always says he learnt to write songs writing for my voice and I certainly learnt to sing professionally through singing his songs). More recently, a singing coach called Ian Adam taught me the basics of actually physically singing.”

FELCI: The Zombies were initially categorized with the British Invasion groups. But you quickly established a signature sound to set you apart. Describe the group dynamic and how the band’s sound evolved.

BLUNSTONE: “The band was always a keyboard-based band that featured harmonies. When we formed this was quite unusual as nearly all bands featured three guitars. I also remember us being inspired by a very wide spectrum of music from classical music to modern jazz, the blues, rock ’n’ roll and pop. Although this helped to make us sound quite different, it also created a problem in promotion and marketing where we sometimes confused an industry who likes to specifically categorize its artists.”

FELCI: Your first major hit in the U.S. was “She’s Not There,” followed by “Tell Her No.” Do you remember Rod bringing those songs in to you and the band? It’s hard to imagine anyone else singing them.

BLUNSTONE: “I especially remember Rod bringing “She’s Not There” into a band rehearsal. I was absolutely amazed as I had no idea he could write songs, and on top of that I think we all knew immediately that it was a special, brilliant song and as it turned out, a song that would change all of our lives. Later I remember before the “Tell Her No” session began at Decca Studios in West Hampstead we received a telephone call from America telling us that “She’s Not There” had just gone to No.1 in Cashbox.  What a way to start a session!”

FELCI: The Zombies disbanded in 1968 shortly after the release of the baroque psychedelic classic, Odessey and Oracle. What were the circumstances surrounding the recording and subsequent breakup?

BLUNSTONE: “I think we all remember this a bit differently. Some of the band remembers there was a feeling even before we started Odessey and Oracle that this would our last album. I certainly don’t remember feeling this way, although one thing we all agree on was that it was time to break away from our original producer Ken Jones. In effect, our last album was produced by Rod Argent and [bassist and songwriter] Chris White. When it was finished, I remember feeling that it was the best we could possibly do which made it bitterly disappointing when the first single was not a commercial success. All in all we started to perceive ourselves as being an unsuccessful band that had simply run its course. Ironically later we realized that we had always had a hit somewhere in the world and I do sometimes wonder what might have happened if the band had continued.”

FELCI: In the interim, you briefly left music and went to work as an insurance company. Why and what was that experience like?

BLUNSTONE: “Like many other bands in the ’60s we were very poorly managed. This resulted, after three years on the road, in the three non-writers in the band being absolutely and completely broke. All three of us had no choice but to find jobs very quickly when the band broke up. Unlikely as it may sound I simply phoned an employment agency and took the first job they offered me. In a strange way, I think it helped me get over the disappointment of the band finishing, as I was kept so busy that I had no time to dwell on the demise of The Zombies.”

FELCI: Al Kooper has been credited with securing American distribution for Odessey and Oracle, which led to the slow-burn success of “Time of the Season.” Were you more surprised when it finally became a hit or that it took so long?

BLUNSTONE: “Odessey and Oracle would not have been released in the states if it had not been for the support of Al Kooper. He risked his career at CBS to champion our album in front of Clive Davis, who at the time was not going to release it. Even then, “Time of the Season” was the fourth single to be released from the album, which made it a huge surprise to me when after all that time it eventually became a hit.”

FELCI: Is there any “lost” material — albums or singles shelved — from The Zombies’ original incarnation that fans would love to hear? Any rarities in a vault somewhere?

BLUNSTONE: “Because we played a lot in the states in the ’60s we sometimes noticed American hits that didn’t chart in the UK. This was certainly the case when we recorded Little Anthony and The Imperials’ “Going Out Of My Head.” A lesser-known fact is that we recorded a demo of the Temptations’ “My Girl.” But just as we were getting ready to record it properly Otis Reading released it in the UK and it went on to be a big hit. That demo is the only remaining track recorded by the original Zombies that has not been released. No one knows where it is and now I fear it is lost forever.”

FELCI: One Year, your 1971 debut solo album, is an underappreciated gem produced by Rod and Chris. You wrote four of the tracks — which are your favorite songs from that album and do you perform them in concert?

BLUNSTONE: “Strangely, a track from One Year, “Say You Don’t Mind,” was a big hit in the UK although it wasn’t a success in America, the exact opposite of “Time of the Season” which was never a hit in the UK. It is a favorite solo album of mine and amongst the tracks that I play most would be, “Say You Don’t Mind,” “Misty Roses” and “Her Song,” all featuring wonderful strings arrangements by super talented Chris Gunning. I do sometimes perform a string quartet section during both Zombies and solo concerts.”

FELCI: Rod and yourself performed in the Palm Springs area last fall, and there seemed to be a genuine friendship and affection between the two of you. What is the status of your relationship and how has it changed over the years?

BLUNSTONE: “Rod and I spent our formative years together rehearsing and performing in the original Zombies. We have been friends now for over 50 years through thick and thin and I think we work together now better than ever. I have the utmost respect for him as a musician and as a human being and feel more comfortable, safe and inspired performing with him than anyone else.”

FELCI: Finally, tell us how the tour with Brian Wilson came about. Why does your music fit so well with his? What fans can expect on Sept. 1 at Fantasy Springs?

BLUNSTONE: “All of the original Zombies were huge Beach Boys fans and also great followers of Brian’s more recent work with his fantastic band, so that when the opportunity came up to tour with him we jumped at it. I think that both The Zombies and Brian Wilson have wonderful songs to choose from in their repertoire, and that those songs will perfectly complement each other making a unique and exciting evening of unforgettable music.