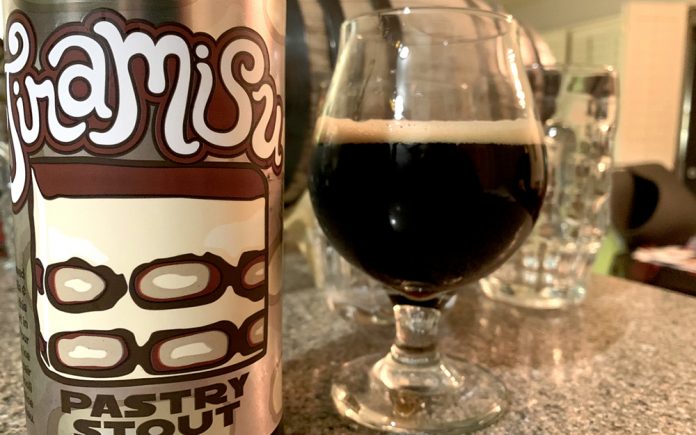 *Sigh*, pastry stouts. Where do I even begin with these. When done right, they’re sophisticated, mouth-watering, liquid confections that make even the most ardent beer purist like myself smile with satisfaction like an actress in a Folger’s commercial, the one that holds her oversized mug of mediocre coffee with two hands and goes “mmmmmm” with her eyes closed like Folger’s doesn’t taste like burnt mud. But when done wrong, they taste like diabetes and sadness. I’d seriously drink a hot toddy made out of Thunderbird and stewbum tears before I’d drink another pastry stout that tasted like soy sauce and saccharin. Yes folks, a byproduct of everyone’s uncle opening a brewery is that some of them aren’t that great at brewing all styles, and I have had some sweet stouts that taste like the aforementioned Folger’s run through a sweaty gym sock filled with lactose.

And that brings me to Trader Joe’s and their latest seasonal offering, a Tiramisu pastry stout. Released alongside a companion Chocolate Babka pastry stout, both retail for $3.99 and run upwards of 8% ABV (Chocolate Babka clocks in at 10%, no wonder it’s now harder to find than the Tiramisu). A look at the bottle of the Tiramisu stout shows that it’s brewed by Campanology Brewing, a contract brewery that has now created many of Trader Joe’s limited and seasonal beers. Renowned for crafting fun and flavorful cheap beer for the California based grocery chain, Campanology’s ability to brew on a budget has made them a mainstay on Trader Joe’s craft beer shelves.

Tiramisu pastry stout comes in a 16 oz. bomber, with copy on the label which reads, “Stout brewed with vanilla & chocolate, this is dessert in a bottle. Pour over vanilla ice cream or pair with cannoli or a slice of tiramisu.” The label art and font are fairly benign, nothing that jumps out at you except for the use of the Star Wars font for the words “pastry stout”. My expectations are fairly low when it comes to reviewing budget friendly beer, but several Instagram influencers have taken the time to display this bottle, causing a small amount of hype in the pastry stout loving community (I can’t even tell if I’m being sarcastic anymore). I popped open a bottle of the Tiramisu stout for a review. 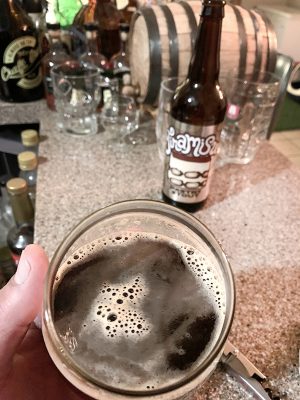 Appearance: Not quite jet black, but a very dark brown that never quite reaches obsidian depths. May appear black in the center of your snifter, but the dark-yellow hues at the edge of your glass will give it away.  3.75/5

Taste: There is something here very reminiscent of amaretto-liqueur. Almonds, cherry, but also a marshmallow-like sweetness. The bottle says brewed with vanilla and chocolate, but what I get is Rocky Road candy bar. This flavor does not seem natural, but rather enhanced with artificial extracts. Not unpleasant, but can get cloying as it warms. A very slight, herbal hop finish at the end keeps it from being undrinkably sweet. 3.5/5

Mouthfeel: Medium-full. The feeling of a thin-bodied beer plumped up with lactose. It feels both watery and heavy in your mouth, which is weird. 2.5/5

Overall: About what I expected based on reviewing previous Trader Joe’s beers made by Campanology Brewing Co. Clean, well crafted, lacks any real depth or complexity, eminently drinkable, and worth the low-price tag. I recommend this for craft beer newbies and those who enjoy beer that doesn’t actually taste like beer, as that is kind of the point of the pastry stout category to begin with. Share a bottle with friends, as it may be too sweet and heavy for many people to finish a 16 oz bomber on their own.