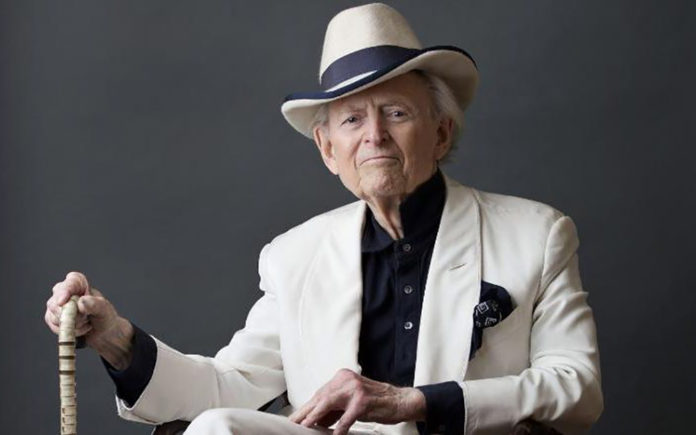 Author Tom Wolfe was raised in the South, lived in New York, and cherished the California lifestyle.  He passed away this month.  He was 88.

His Southerner look was not an act.  Every day Wolfe donned his iconic outfit: A cream or white three-piece suit, tie, handkerchief, a matching homburg hat—oh, and spats!

Starting his writing career as a journalist, Wolfe wanted to stand out, neutralize and provoke those whom he was interviewing thus “making him, in their eyes, a man from Mars, the man who didn’t know anything and was eager to know.”

Below the disarming charm and country gentleman attire, Wolfe was a sophisticated and astute observer of American culture.  Earning a Ph.D. from Yale University’s American Studies program, he quickly became one of America’s best ethnographers.

As a reporter, Wolfe was drawn to people and places not politics. But, in 1959 he was hired at the The Washington Post where he won an award for his reports on Cuba. 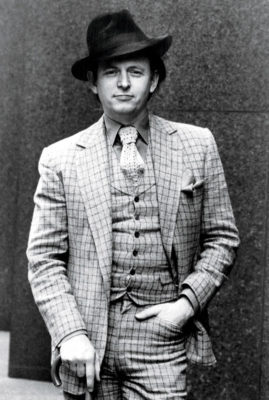 In 1962, Wolfe left for New York to become a reporter and feature writer for the Herald Tribune.  During a newspaper strike, Esquire magazine asked him to write a story on the custom car culture in Southern California.  Wolfe struggled how to tell the story and with the encouragement of his editor, Wolfe found his voice and style.

The article drew attention and provided notoriety both favorable and unfavorable.  But, Wolfe soon had a publishing deal.  “The Kandy-Kolored Tangerine-Flake Streamline Baby” was a collection of Wolfe’s periodical work.  Wolfe’s writing technique became known as the “New Journalism” where literary style was applied to reporting the facts.

It was during this time Wolfe found a fondness for California.  He admired the changes taking place in the state.  Like an ethnographic study, Wolfe began to tell the stories that were shaping California culture: Its people, architecture, surf, liberal thinking and drugs.

In an interview, Wolfe told Marc Weingarten author of “The Gang That Wouldn’t Write Straight: Wolfe, Thompson, Didion, Capote and the New Journalism Revolution,” how Los Angeles shaped his prose.

“When I started writing in what was known as my style, I was trying to capture the newness and excitement of the West Coast.”

At the behest of author Ken Kessey, (One flew Over the Cuckoo’s Nest) Wolfe embedded himself with Kessey’s communal clan, which resulted in Wolfe’s beloved work about the San Francisco counter culture The Electric Kool-Aid Acid Test.

Over his lifetime, Wolfe wrote 13 nonfiction works.  The Right Stuff about the Mercury space program and the astronauts who worked from California’s Edwards Air Force Base was made into a feature film.   Several of his nonfiction books focused on California personalities and lifestyles.

Wolfe wrote four novels.  His first The Bonfire of the Vanities was published in 1987 and became a bestseller and critically acclaimed establishing Wolfe’s place in history as a literary powerhouse.  It was also made into a Hollywood movie. His novel I Am Charlotte Simmons 2004 was panned at the time, but still speaks to the issues of what it’s like to get a university education. His last novel Back to Blood was published in 2012.

I was surprised to discover Wolfe was a good baseball player and tried out for a position with the New York Giants as a pitcher!  He was cut.  But, for such a dapper intellectual, he was also a jock. In addition, Wolfe was an accomplished artist preferring pen and ink.  He often illustrated his written work

Wolfe’s prose were honest, direct, and subjective.  He was a cultural anthropologist writing about his world.  Wolfe wanted his experience to be the reader’s experience.  He dared to satirize and cross lines trusting the reader to see the humanity and the compassion of the people who populated his stories.  But what I most appreciate about Wolfe, is that he made journalism more readable, interesting and fun.