Comic books used to have a negative reputation. Then Hollywood found out what the rest of us have been enjoying for years, and brought it to the mainstream. With that, I wanted to share my top 10 choices for graphic novels. For those wondering just what a ‘graphic novel’ is: it’s basically a book featuring a story that highly relies on an artist to “paint the picture” for the audience.  Of late, comic book companies have been pumping them out to whet the appetite of folks who may not venture into a comic books shop but saw “Captain America Civil War.” People who want to check a title out, not have to worry about a “jumping on point,” and still be able to read about the same characters they just saw on the big screen. At the same time, the graphic novel is not a new concept by any means. Comic companies have been re-releasing their books in ‘collected editions’ for a number of years, whether it be in a hardcover or soft cover form. It has just now begun to be seen as an easier thing to market to a larger audience.

I’ve compiled a list of my Top 10 Graphic Novels in hopes of turning folks on to new books and/or books which they’ve yet to read. Please note: a majority of these titles are available in periodical format at your local comic book shop, more than likely available in digital formats from sites like I-Tunes and Comixology, or worst case scenario: they can be ordered on Amazon. 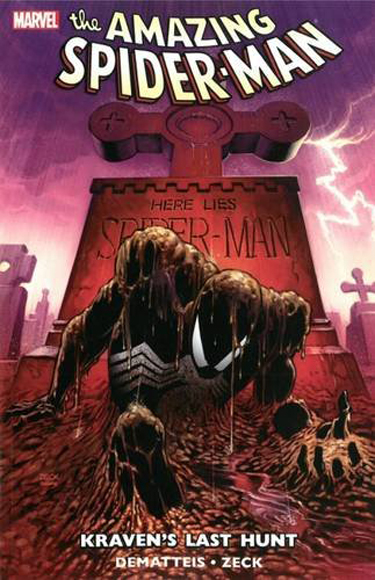 Written by J. M. DeMatteis with art by Mike Zeck.

This has to be my one of my favorite Spider-man stories, because instead of the standard comic book set-up of “hero vs villain – the hero saves the day as the villain is led off to jail”, you spend a majority of this book worrying if and how Spider-man is going to be taken out by Kraven, a villain with something to prove who wants to kill Spider-man. 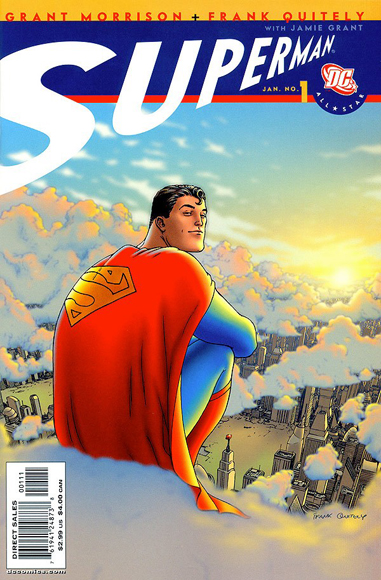 Written by Grant Morrison with art by Frank Quitely.

Before I go into this, I want to explain that I generally find Superman to be one of the blandest and most boring characters in fiction. Granted, I realize without Superman appearing in Action Comics # 1 we’d be talking about something else. The reason why I chose this story was not only due to Frank Quitely’s art but also because Grant Morrison, for all his faults, actually wrote a story about Superman and his supporting casts’ back stores, without the baggage. It has the pacing of a movie I know I’d watch. With that, Morrison also did what a lot of writers in comics are afraid to: mix up the status quo. Kill the main character, show a human-esque side of an alien that longs to be truly human. I mean, Clark Kent tells Lois Lane he’s Superman. That reason alone should be enough to go pick up the book. 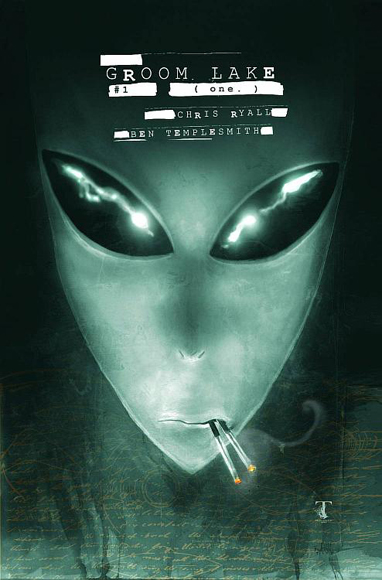 Written by Chris Ryall with art by Ben Templesmith.

This story was handed to me by a friend. I read it because I was researching Templesmith’s work for another geek related endeavor, and not only could I not put it down, but I couldn’t stop laughing. I mean generally when you hear that a story revolves around aliens, a secret government base, and conspiracies, you’re not expecting to see some of the stuff that is drawn and talked about in this book. It WILL make you laugh out loud. 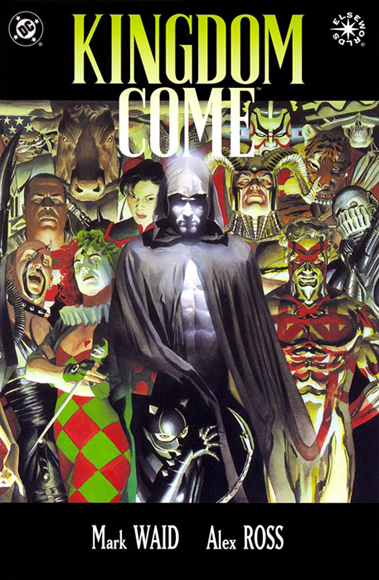 Written by Mark Waid with art by Alex Ross.

This story is one of the best examples of what DC comics calls an “Elseworld” story. Basically it’s their way of saying “what if all this stuff happened?” and “here’s the new status quo; if you don’t like it, well tough.” In this story we not only see a future where heroes like Superman, Batman, and Wonder Woman have all grown apart, but their successors have brought the planet to the edge of chaos. Now somebody has to go back and try (‘try’ being the operative word here) to stop them and save the day. What makes this story stand out even more is Alex Ross’ art. That man has to be one of the BEST modern artists in all of comics. 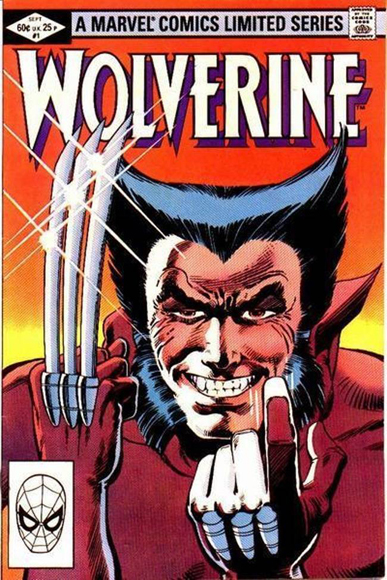 Written by Chris Claremont with art by Frank Miller.

This is the first solo adventure of Wolverine. It is honestly some of writer Chris Claremont’s best work. As we are all familiar with Claremont and how he is basically responsible for everything fans love about the X-Men, this story took him over the top. It not only took a fan favorite character out of the only book fans could find him at the time (yes it was 1982 and there was only a single X-Men title on the shelf), but it also crafted a story which is very gritty and honest. Plus there’s Wolverine fighting ninjas for 4 straight issues, and all of it was drawn by Frank Miller. Oh, and yes, before anyone asks: this is also the story from which the producers of “The Wolverine” sampled from, minus, the giant stupid robot with the fiery swords. 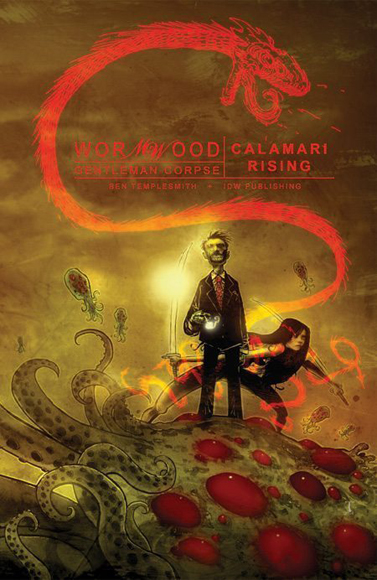 Written and drawn by Ben Templesmith.

After reading this Graphic novel, I think it’s safe to say that Ben Templesmith is a genius. He’s found a way to make a talking, trans-dimensional worm the main character of a story in which it rides around in a corpse, consumes alcohol, and hangs out at a strip club with a robot drinking buddy and an exotic dancer/body guard.  I mean, I can honestly say I’ve never taken hard drugs; and don’t feel I need to after witnessing Templesmith’s awesome art and writing style in this book. If you want to not only laugh, but also sit in awe of amazing art and writing then pick this book up! 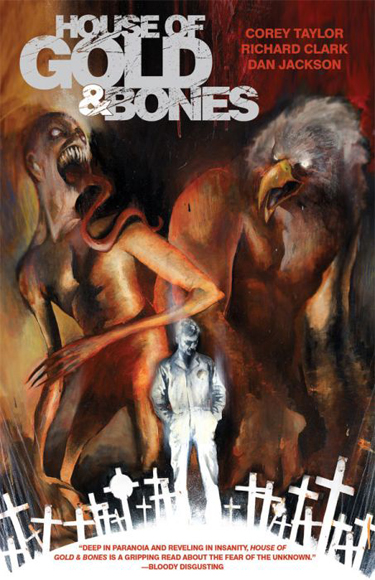 Written by Corey Taylor with art by Richard Clark.

When most people think of Corey Taylor, they think of one of the two metal bands he fronts. Whether it be Slipknot or Stone Sour, most have no idea that he’s an accomplished author. Taylor is no one-trick-pony by any means, and this book is proof of that.  It’s a story which not only features some wonderful art by Richard Clark, but also shares a title with two albums by Taylor’s band Stone Sour, and actually has more in common with 1984 and Pink Floyd’s the Wall. It’s scary to the point where you want more, even if the story has come to an end. 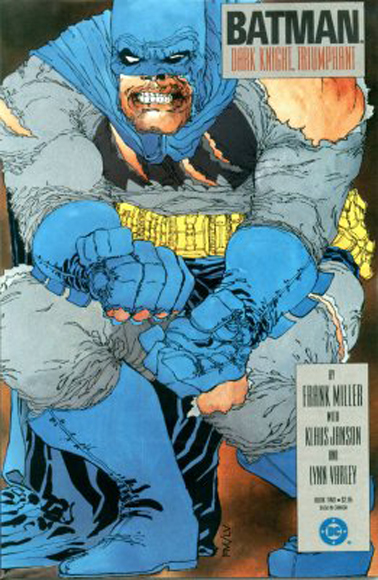 Written and drawn by Frank Miller.

This is one of the best Batman stories ever written. Period. Everyone knows it because it’s stood the test of time. This book took the character and brought it back to its roots, helping it shed the campy reputation gained with the 1960s TV show.  It had even gotten to the point that fans demanding more prompted Miller to write two sequels. Interestingly too, the origin of this book came of Miller freaking out about growing old himself. In the PBS Documentary “Superheroes” Miller says “Something terrible happened, I turned 29 years old and I realized I was about to turn 30 and I was going to be older than Batman and I could not let that stand, I had to make him older, he was the tough father figure… I…I had to come in and fix this right quick and I made Batman older” 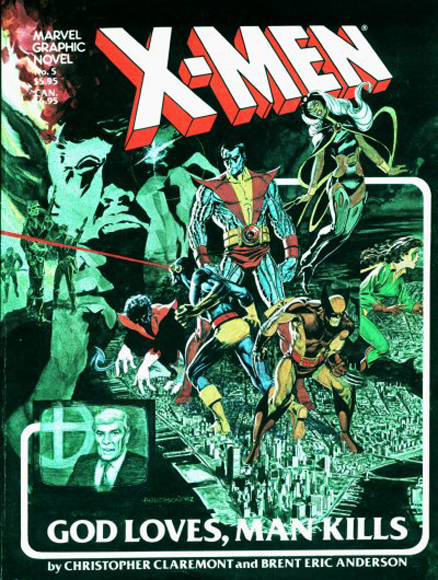 Written by Chris Claremont with art by Brent Anderson.

This is the quintessential X-Men story. It follows the group of outsiders we know as the X-Men: people born with extraordinary abilities and shunned for them, but who have made a conscious decision to work with and protect their fellow man. The story puts them up against a religious leader who is hell bent on eradicating them under the guise of “protecting normal people”.  The X-Men, as we all know, have always served as a metaphor for anyone who felt ostracized. Whether of a different skin color, minority, sexuality, and/or anything else, folks flock to these characters. We’ve watched them grow, which has helped them last the 50 plus years’ worth of publishing. Plus this book, in case you didn’t know, served as the basis for the film “X-2”. 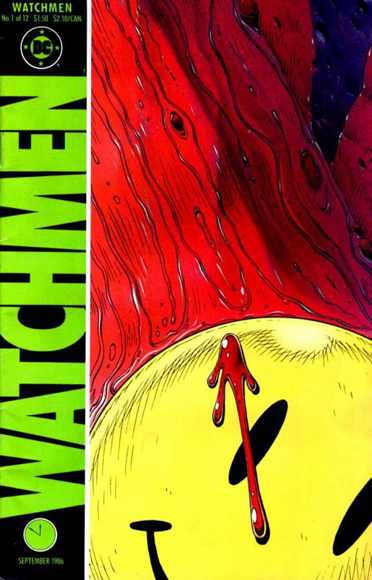 Written by Alan Moore with art by Dave Gibbons.

If you’ve gotten this far and hadn’t guessed Watchmen was going to come in number 1, well I don’t know what to tell you. Yes, it’s a predictable choice, BUT if you think about it: when it came out in 1986, the same year as Miller’s “The Dark Knight Returns”, it re-vitalized the comics industry. It showed that gritty stories which touch on realistic themes could keep readers’ interest. Granted, that also heralded a plethora of copy-cat books, which is by no means is an un-common thing, but Watchmen reminded us of how dangerous it is to put our faith in false idols (Superheroes). While I personally am not the biggest Alan Moore fan, I would be a fool not to recognize the impact this book had. Also, for those reading this: do yourselves a favor. Don’t watch the film based on this property. You’ll want to throw your TV out the window and run away to live in the cave next to Moore’s in whatever English swamp he’s currently holed up in.